Walkers have evolved a "protective shuffle" whilst texting 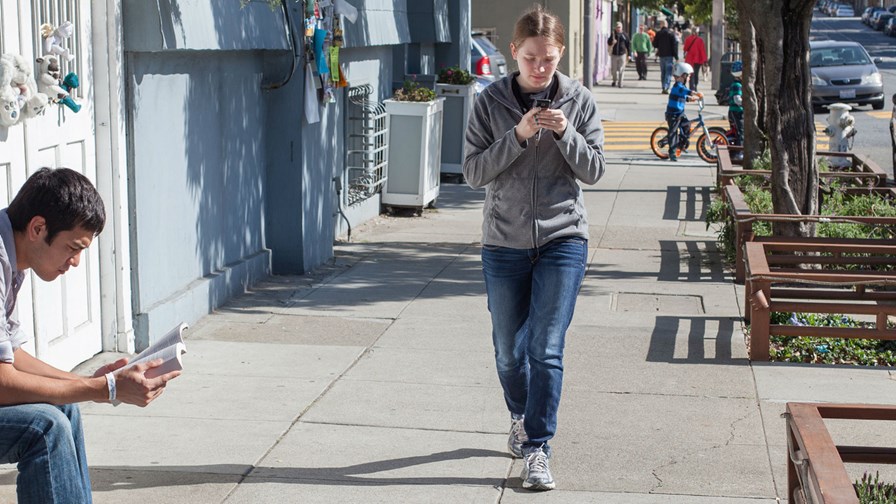 "We few, we happy few, we band of brothers" who can actually resist the temptation to tweet, text and message as we peregrinate the pavements of towns and cities in just about anywhere in the developed world are becoming an endangered species as routinely we are barged off sidewalks and under buses by self-absorbed cell-phone addicts with their eyes down and their brains idling in neutral.

According to studies undertaken at the University of Bath in the UK and at Texas A&M University in the US, the shambling gait of the ever-growing numbers of homo sapiens who habitually walk whilst tweeting is mutating into a kind of high-stepping mincing prance that looks disturbingly like the front half of a palsied pantomime Shetland pony attempting to win first prize in the dressage event at the Burghley Horse Trials.

In a (very) small scale study, researchers, rather than doing it in the road, created an ersatz obstacle course in a laboratory that apparently "resembled a street scene". It consisted of a raised platform twenty-seven feet long with short vertical posts, steps, trip hazards and two dummies propped up here and there in the scene to represent pedestrians. Very, very realistic, I'm sure you'll agree.

Researchers cajoled an entirely unrepresentative sample of 30 Australian mobile-phone aficionados (aged between 18 and 50 years because everyone knows there are never any kids or silverbacks on the mean streets) to be guinea-pigs in the study. Each participant had to negotiate the obstacle course three times: once while texting, once while using a maths quiz app, and once just pottering amiably along without any distractions.

Scientists used motion capture technology (of the sort used on and by Andy Serkis in the Lord of the Rings film trilogy - and we all remember the way Gollum walked) to observe their ambulatory antics and timed their progress.

According to them, humans are developing a particular, not to say peculiar, movement pattern to enable them to text whilst walking. We are asked to believe that this  "protective shuffle' accompanied by occasional spontaneous arabesques, cabrioles and pirouettes, has apparently evolved to protect phone users from barging into other people or colliding with various moveable or immoveable objects in their perambulatory environment.

It seems trottoir texters travel at a much slower pace than their unencumbered fellows and use large and often often exaggerated gestures as they galumph along - while those with whom they collide often respond with other, rather more explicit gestures of their own.

So, naturally enough, the conclusion of the study is that texting whilst walking makes it harder to walk in a straight line. Well, who'd have thought it and would you believe it?

The researchers note that subjects adapted their 'normal' movements to compensate for the loss of 'focus and vision' that is the quid pro quo of texting while walking. The study found that ambulant texters took 26 per cent longer to complete the in-lab obstacle course than those subjects who just walked along.

It seems then that humanity is ill-adapted to successful multi-tasking which is probably why so many people find it almost impossible to whistle and fart at the same time. The same is true of walking and texting. They end up prioritising one thing over another and therein lies the problem. Prioritising texting over walking results in compromised posture and balance. It also annoys the hell out of other people - the one's who can wait a while to look at text messages and would love to get from point A to point B without having to run the gauntlet of the wilfully ignorant.

Rakuten is to collaborate on a mass vaccination centre in Kobe, Japan - is aiming at 1000 a day