Are we poised for a rush to fixed-to-mobile broadband substitution? 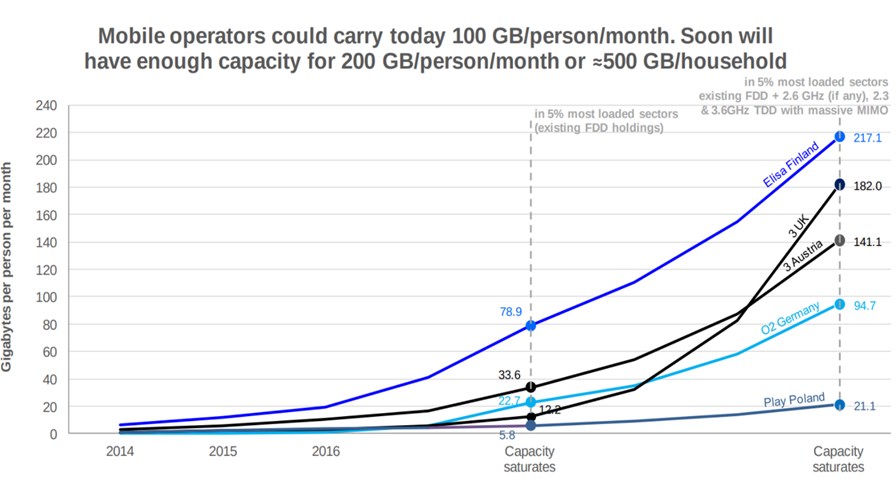 A Finnish consultancy believes that the time is ripe for the oft-mentioned fixed-to-mobile broadband substitution.  That’s where, as a mobile operator, you tariff your broadband data services so that they can be sold competitively and successfully  to households currently using a DSL fixed broadband connection.

Rewheel claims that in 2016 most European mobile operators only used a tiny fraction of their available network capacity to service their mobile customers.  It points out that as operators continue moving to ‘unlimited’ tariffs (see this week’s - Free takes the French market into ‘unlimited’ data) they can clearly carry up to 100 Gbytes per person, per month (that is Free’s acceptable use ceiling).

And Free is by no means alone.  Freewheel shows from a report released last year,  that unlimited data is back in a big way in Europe with unlimited mobile data plans now available in 14 European countries. Consumers can buy a 4G mobile broadband plans with an unlimited volume of data for €25 or less in six countries: Poland, Austria, Latvia, Lithuania, Finland and Estonia and now France.

Given the bandwidth improvements coming down the track with TDD/massive MIMO and 5G, under Rewheel’s calculations operators could soon have enough capacity for 200 Gbytes per person per month or 500 Gbytes per household.

So not only could mobile operators (or the mobile arms of converged fixed/mobile operators) start to steal broadband customers, in the long run - instead of building or maintaining two separate networks, each with its own technologies and regulatory regulatory frameworks -  they could have just one.

It’s not as if the substitution idea hasn’t been floated before.

Way back in the 1980s and 1990s some operators toyed with phone line substitution, tariffing calls made from the ‘home’ cell with fixed line competitive pricing and offering ‘tethered in the hallway’ GSM phones that looked like fixed phones.

In fact Rewheel maintains that substitution is well and truly alive and well in Finland where an increasing proportion of the highly digital population has moved away from home WiFi and just uses their mobile services for everything -  video and all. It works.

But the distinction was never a technology driven thing. Telcos with both fixed and mobile holdings always wanted a clear pricing difference between fixed and mobile voice and data. That way they could charge what the market would bear for mobility and mop up the remaining static home requirement with DSL. If you merged them you would lose the mobile premium since you’d have to tariff your data much lower if you were selling it by the Gbyte. And if the offer was hugely successful it meant sacrificing at least a proportion of your substantial  DSL  business.

What’s changed is that competition in many markets has driven down mobile data prices to the ‘unlimited’ inflection point. This is where customers understand they are paying for a connection, not for a bucket of data, so there’s no need to count it any more, no need to switch from one to the other because your limit is getting dangerously close.

On that basis the ‘unlimited’ deal could be used to feed the living room TV as well as the mobile device.

If further improvements in capacity mean even greater reserves of bandwidth are going unused month by month, then it only takes one mobile operator to break from the pack and go for market share, offering unlimited data to both fixed and mobile devices. Are we near that point now?