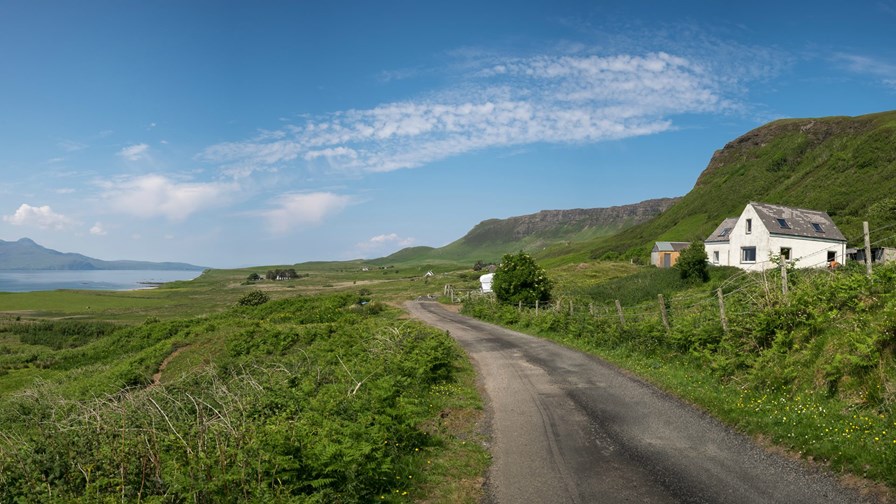 Being a small and rich country with a big population it might be expected that the UK would, by now, have some of the best rural broadband coverage in Europe - but it doesn't. Successive governments have spouted endless platitudes and promoted countless visions of the broad sunlit broadband uplands we should all have had access to in the mid-1990s but still haven't reached almost 18 years into the 21st Century.

Broadband policy has created enough hot air to keep Google's Project Loon balloons aloft for decades but the reality is that even in the cities genuinely fast Internet access remains the exception rather than the rule. The UK has been let down time and again by administrations notable only for their paucity of imagination where comms technology is concerned, by a privatised incumbent telco that has remained almost as monopolistically-minded as it was when it was state owned, by a somnolent and frequently ineffective regulator and serious lack of meaningful competition.

Despite round-after-round of promises, pledges and PR spin, progress remains slow and partial, especially in Britain's still sizeable remote rural areas where decent broadband access is rarer than hen's teeth. The rural broadband gap remains wide and much hope for the future lies squarely at the door of Openreach, now, at long, long last, ostensibly a separate company having been split-off from BT. Openreach has been responsible for much of the UK's broadband infrastructure for many years but whilst an integral division of BT, did very little to promote or even permit competition.

In a recent statement, Openreach said, "Rural roll-out is accelerating at pace and the gaps are being closed". Fine words - but they butter no parsnips. Acceleration from the pace of an arthritic snail to that of a knackered donkey won't cut the mustard. Times have finally changed and now that it is at least nominally independent of its behemoth former parent the jury is out and the 'new' Openreach will be judged on its measured and monitored performance rather than on vague promises of "jam tomorrow".  We'll see.

Meanwhile, in some parts of the rural UK, small independent companies have been formed to provide a broadband solution for local households and businesses ill-served by BT and other big players. For example, one solution that is finding favour is the use of so-called "white space" TV broadcast frequencies in the UHF band. TVWS  is 'spare spectrum'  left over from the switch to digital television and can be transmitted from the standard TV broadcast masts that have long been in situ throughout the country.

The broadband signal is fully viable up to a distance of 10 kilometres from the mast and passes undisturbed o'er hill and vale (and through buildings) to provide a consistent broadband service at an average speed of 22.8 Mbps. Considering that the government target for what it laughingly calls "Broadband Britain" is just 10Mbps (the goal was set in the early years of the century and remains extant) the new service is a revelation to the digitally deprived populace of rural Monmouthshire in Wales and Isle of arran in Scotland where trials are underway.

The TVWS-based service is the brainchild of Nominet, an organisation better known as the .uk domain name registry. It is working with Broadway Partners, whose aim and ambition is "to cover the whole of the UK with Whitespace radio, a technology perfectly suited to meeting the rural broadband challenge." Broadway Partners says TVWS spectrum is tailor-made for remote, hard-to-reach rural areas, delivering great quality broadband even through trees and buildings and around hills."

Currently trialling the latest generation of the technology which can deliver 40Mbps, it is expected that a further iteration will boost that to 100Mbps. The great thing about TVWS is that anyone that wants to can freely use it to build a commercially viable high-speed data network. BT ran TVWS trials on the Scottish island of Bute and in rural Suffolk but abandoned them to concentrate on "other solutions".

Meanwhile, across the Atlantic, Microsoft has big plans to use TVWS to bring broadband to the huge swathes of the country that still do not have access to broadband services at anything approaching economical user rates. According to the latest figures from the US regulator, the Federal Communications Commission (FCC), 24 million Americans living in remote rural areas are still without broadband. Step forward, Microsoft. As part of the 'Rural Airband Initiative' the company says it can solve the problem within five years by using TVWS. It plans to have 12 trials underway in twelve states by mid-2018.

Microsoft's Chief Legal Officer, Brad Smith, says, "Real progress to close the rural broadband gap has plateau'd in recent years. Our goal is not to enter the telecoms business ourselves or even profit directly from the projects we get involved in. We will invest in the upfront capital projects needed to expand broadband coverage, seek a revenue share from operators to recoup our investment and then use these revenue proceeds to invest in additional projects to expand coverage further."

"As a country we can't settle for an outcome that leaves behind more than 23 million of our rural neighbours. To the contrary, we can and we should bring the benefits of broadband coverage to every corner of the nation. This is about getting everybody online in rural communities, including consumers, businesses, farmers and schools."

At first glance TVWS certainly seems to have the potential to be more viable and, literally, less "pie in the sky" than Facebook drones or Loon balloons. Time will tell.