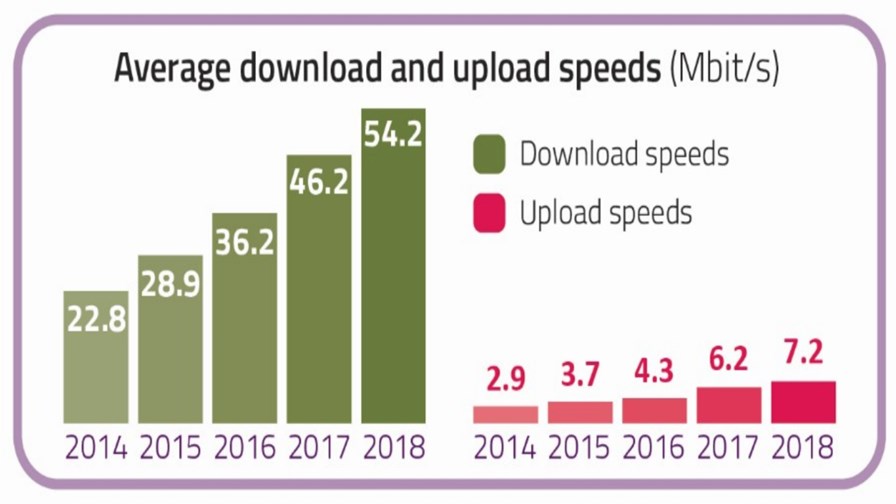 The UK has settled into the comfortable tradition of moaning about broadband speeds but apparently not shopping around to improve them. UK performance is seemingly always below average in the international broadband rankings and even lower within Europe. And while average speeds improve (as, on average, they must) the rankings are usually disappointing.

Part of the reason for this is the UK incumbent’s historic reluctance to spend on fibre build while some of its European peers have raced ahead. That’s pulled down the averages as BT preferred instead to use broadband to extend the life of its copper plant with VDSL 2 (which can deliver up to about 70Mbit/s) and G.fast which produces over 100Mbit/s download speeds.

The problem, from a global ranking point of view, might be that while VDSL 2 and G.fast produce good ‘user experiences’ in comparison to slower DSL, they don’t do as much for the averages as do the super-speedy fibre to the premises (FTTP) connections which can easily yield 300 Mbit/s and more.

However, rising clamour for fibre, plus the arrival of competitive fiber diggers in the UK, has seen BT change tack and undertake to speed up its FTTP effort (see today’s “BT fibre push a step in the right direction, 5G news is no news”).

Promising fibre jam tomorrow doesn’t do much for broadband rankings today, but while those pesky rankings haven’t changed much Ofcom is pleased to report today that, partly due to the increase in fibre connections of the past year or so, UK speed averages have risen nicely.

And it reports that both download and upload speeds have more than doubled over the last five years.

Ofcom said it also looked at how different broadband packages affect people’s experience of streaming video content. People using superfast connections or faster were able to stream Netflix films or shows in ultra-high definition (UHD) without buffering in almost every case, it claimed. But only one-in-10 homes with basic, copper broadband are able to stream their favourite shows in UHD.

Today, Ofcom claims, more than 90 per cent of UK homes and small businesses could upgrade to  superfast connections to improve their streaming experience – often without paying more than they do now.