[Shenzhen, China, March 30, 2020] Huawei made a series of important announcements at the Huawei Developer Conference 2020 (Cloud) – HDC.Cloud, on March 28, notably that MindSpore, the all-scenario AI computing framework, goes open source on Gitee, and that ModelArts Pro, the first-ever AI app development suite for enterprises, goes live on HUAWEI CLOUD. Huawei also showcased some of the significant applications for Huawei's Atlas AI computing platform, on the cloud, edge, and devices. In doing so, Huawei has delivered the full-stack, all-scenario AI solutions for developers that it had first unveiled at HUAWEI CONNECT 2018. 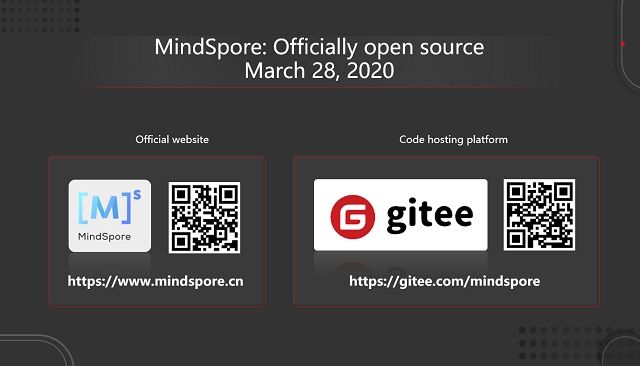 MindSpore has focused on lowering entry barriers for AI developers, with Professor Chen noting: "MindSpore natively adapts to all scenarios across the device, edge, and cloud. We implement AI Algorithms As Code through on-demand collaboration for easier model development, and provide cutting-edge technologies, and co-optimization with Huawei Ascend AI processors to improve runtime efficiency and computing performance. We also support other processors such as GPU and CPU."

Zhang Dixuan, General Manager of Huawei Atlas Data Center Business, shared some of the best device-edge-cloud development practices by partners who had made use of the Huawei Atlas AI computing platform. The presentation included a detailed demonstration of the performance optimization process behind the high-density cloud AI inference solution, as well as the benefits of efficient edge inference and ultra-low-consumption device-side inference, which are based on cloud-edge collaboration.

Huawei has worked with dozens of partners to promote the use of the Atlas series accelerator module, card, edge station, and server powered by Huawei Ascend AI processors, across numerous fields, including smart transportation, smart power, smart finance, smart city, and smart manufacturing.

Two years later at HDC.Cloud, Huawei has shown how much progress it has made in its ambitious goal, especially on the developer side. The full-stack, all-scenario solutions that have been introduced, allow for global developers to develop AI applications with greater ease, incorporate the benefits of AI across numerous industries, and add value for enterprises and society at large, by contributing to a robust global AI ecosystem.