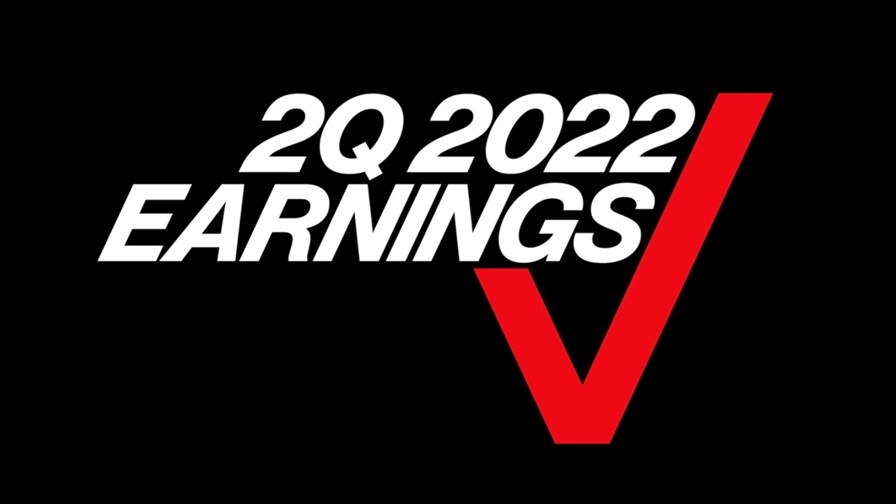 This spells trouble… Following AT&T’s warning in its second-quarter earnings report on Thursday that macro economics are affecting its financial performance, rival major US operator Verizon reported disappointing subscriber addition numbers and cut its full-year profit forecast as it issued its own second-quarter report. Total revenues were flat year on year at $33.8bn, post-paid mobile subscriber numbers increased by only 12,000 and the operator slashed its full-year earnings per share (EPS) forecast to between $5.10 and $5.25, compared with the previous forecast of $5.40 to $5.55. “We are determined to improve our operational and financial performance for the second half of the year,” noted the operator’s chairman and CEO, Hans Vestberg. Verizon’s share price dipped by 6.6% to $44.53 in early trading on Friday. Higher mobile service prices and inflationary pressures could weigh heavy on the US telco sector during the second half of the year. For further details on Verizon’s second-quarter performance, see this announcement.

The UK’s Competition and Markets Authority (CMA) has given the green light for the joint venture (JV) between BT Sport and Warner Bros. Discovery, a decision that allows the two companies to integrate BT Sport and Eurosport UK in the coming weeks and “form a sports joint venture for customers, providing the JV with one of the most extensive portfolios of sports rights in the UK & Ireland.” The JV was first announced in May this year. Its board will be equally represented by appointees of BT and Warner Bros. Discovery, with Marc Allera, CEO of BT Consumer, set to be the first chairman. Read more.

Canadian operator Rogers Communications has replaced its chief technology and information officer (CTIO) after a damaging network outage earlier this month left millions of customers, including emergency services, without services for hours. Jorge Fernandes, who joined Rogers in early 2018 from Vodafone, has been replaced by Ron McKenzie, who was head of the operator’s enterprise services division, reports The Globe and Mail.

Belgian national operator Proximus says it has spent €109m on acquiring a licence for 45MHz of spectrum that has just been auctioned by the Belgian Institute for Postal Services and Telecommunications (BIPT) in the 1400MHz band – half of the 90 MHz that was put up for auction. In a statement, Proximus said the extra spectrum will enable it to “increase mobile capacity and thus keep up with its customers' data usage, which is expected to continue growing in the coming decades”. Orange Belgium picked up 30MHz for €69.7m, while Telenet bagged 15MHz for €38m, according to BIPT. The auction was the second phase of a new spectrum award process: In the first phase, held last month, spectrum for 5G, as well as 2G and 3G, was awarded to five companies, including two new entrants.

Altice USA is reportedly seeking to cut its debt pile by offloading Suddenlink Communications, which provides cable TV and broadband services in south-central US, according to Bloomberg, with Altice seeking about $20bn for the subsidiary it acquired for $9.1bn in 2015.

“Infamy, infamy, they’ve all got it in for me”. Things are usually pretty quiet in the Bailiwick of Guernsey, a 65 km² island and British Crown Dependency situated in the English Channel off the coast of Normandy, France. The population at the 2021 Census was 63,590. Cows are milked, potatoes are grown, tourists come and go while banks and financial institutions thrive. Guernsey is one of the Crown Dependencies that were annexed from the Duchy of Normandy under the terms of the Treaty of Le Goulet in 1204. Recently however, the even tenor of bucolic life on Guernsey has been disturbed by a telecoms scandal that has resulted in the Guernsey Competition and Regulatory Authority (GCRA) fining the operators Sure and JT the sums of £2,962,632 and £439,608, respectively, for “commercial collusion” and the infringement of competition law. Twenty years ago, the international division of Cable & Wireless bought Guernsey Telecoms from the States of Guernsey and, in 2007, rebranded it as Sure. Sure owns all physical broadband lines in Guernsey, while JT Group (previously Jersey Telecom, the erstwhile monopoly operator in the Bailiwick of Jersey) gets its services via wholesale agreements. For several months now, Sure has been deploying fibre-optic broadband infrastructure across Guernsey and says it plans to complete the rollout by the end of 2026. The GCRA investigation related to the period between August 2018 and November 2019 when, the regulator says, “JT and Sure privately developed a joint plan, without disclosing it to the Authority or the States, that would mutually benefit each in their home markets”. The collusion relates to the removal of JT’s network infrastructure from Guernsey with the quid pro quo being that Sure would remove its infrastructure from Jersey. All very neat and tidy. The GCRA also alleges the two telcos repeatedly swapped information about their commercial strategies relating to the deployment of 5G, “at a slower pace than thought by the States.” They also allegedly decided on a common line to take – that they were working to “achieve the objective… in line with, or ahead of, the UK” when, in fact, they were doing nothing of the sort. The meat of the regulator’s complaint is that Sure and JT publicly went through the motions of complying with competition law while agreeing privately between themselves “not to do so”. The regulator also charges that Sure hid evidence, provided “contradictory and misleading accounts”, and provided “materially untruthful answers” to the GCRA from the beginning to the end of its investigation. In response to the decision and the fine, a Sure spokesperson said the investigation was “completely flawed from the outset”, and the telco will appeal through the Royal Court. The group CEO of Sure, Alistair Beak commented, “We are steadfast in our belief that we have done nothing wrong; at all times Sure has acted in accordance with the spirit and letter of the law.” He added, “Yet again, with this latest penalty process, we find ourselves facing a regulator which seems determined to find against us, in the face of clear and compelling evidence that there has been no wrongdoing. We will also continue to stand by the members of the Sure team who have acted with integrity and professionalism throughout this process, despite the spurious claims made against them by the GCRA, which are equally fundamentally wrong.”

I spy with my little eye... The UK government has stepped in to prevent the University of Manchester licensing state-of-the-art vision-sensing technology from Chinese firm Beijing Infinite Vision Technology Company Ltd, which describes itself as a semiconductor company. The UK business secretary, Kwasi Kwarteng, invoked the provisions of Britain’s new National Security and Investment Act to deny the issuance of a licence. Manchester University had signed an agreement with the Chinese company to develop, test and verify, manufacture, use and sell licensed products incorporating its "Scamp-5"and "Scamp-7" vision sensors. The University of Manchester Innovation Factory describes Scamp as a low-power, high-speed machine vision device using cutting image sensors to execute a variety of vision algorithms. They do not provide raw images but perform their own computations to enable "new embedded-vision applications in areas such as robotics, VR, automotive, toys [and] surveillance”. Meanwhile, the UK government is very concerned that the technology would be used by the Chinese for military purposes, mainly in missiles and drones. In a statement, Manchester University wrote, “We will, of course, abide by the decision that has been made.” It pointed out that the university has robust and thorough internal processes in place to ensure that proposed international agreements do not impinge on national security matters and, on examining the proposed deal with Beijing Infinite Vision Technology Company Ltd in detail, referred the agreement to the UK government, which quickly killed it off.