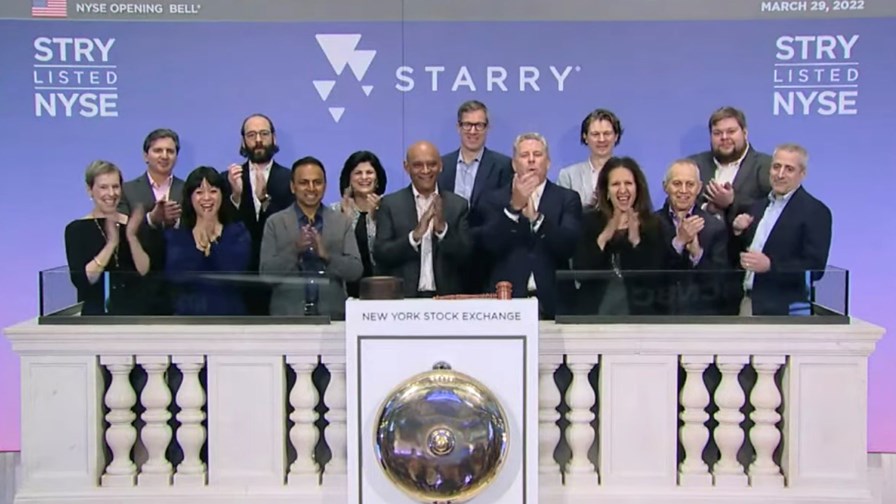 US fixed wireless access (FWA) service provider Starry listed on the New York Stock Exchange (NYSE) today, under the ticker symbol STRY, courtesy of its merger with SPAC (special purpose acquisition company) FirstMark Horizon Acquisition Corp. in a move that values Starry at US$1.76 billion. Starry ended 2021 with 63,230 customers, up by 83% compared with the end of 2020, and now has its service available to 5.3 million households. Its Starry Internet service is available in Boston, Los Angeles, New York City, Washington, DC, Denver and Columbus, and it has an “expansion roadmap that includes more than 40 million US households.” TelecomTV wrote about Starry’s strategy and its plans for a listing in October last year, and then noted in January this year that the FWA services market in the US is tipped for significant growth in the coming four years. In early trading Starry’s share price was down 2.8% to $9.38.

Cloud networking pioneer Alkira says it’s now targeting European enterprises and setting up its European headquarters in Amsterdam for an international expansion drive across EMEA. It is recruiting teams in the UK, Germany, France, Benelux, Nordics and Spain and signing new channel partners. The push is being headed up by VP International, Paul Couturie, who has undertaken similar European expansion for TippingPoint, Efficient Networks, and Palo Alto Networks. Alkira claims its cloud network as-a-service (CNaaS) dramatically cuts the time it takes to provision secure, low-latency cloud networking for multinational and increasingly multi-cloud, enterprises. US users of its service include Warner Music Group, the giant Koch Industries and auto industry startup Tekion.

Russian cybersecurity vendor Kaspersky Lab has been added by US regulator the FCC to its “list of communications equipment and services that have been deemed a threat to national security, consistent with requirements in the Secure and Trusted Communications Networks Act of 2019,” making it the first Russian company to earn that unwanted badge. It was joined in the new line-up of security threats by China Telecom (Americas) Corp, and China Mobile International USA Inc., which are most certainly not the first Chinese companies on the list (Huawei and ZTE are top of the pile, of course). “Last year, for the first time, the FCC published a list of communications equipment and services that pose an unacceptable risk to national security, and we have been working closely with our national security partners to review and update this list,” said FCC Chairwoman Jessica Rosenworcel. The addition of the three new names “is the latest in the FCC’s ongoing efforts, as part of the greater whole-of-government approach, to strengthen America’s communications networks against national security threats, including examining the foreign ownership of telecommunications companies providing service in the United States and revoking the authorization to operate where necessary.  Our work in this area continues,” she added.

The planned merger between dtac, Telenor’s Thai business, and domestic rival True seems to have hit a speed bump. Despite the two companies having entered into an agreement in February to combine their operations into a new “telecom-tech company,” the proposal is being questioned by the local authorities, Nikkei Asia reported. A report conducted by a supervisory authority was sent to Thailand’s telecoms regulator, the National Broadcasting and Telecommunications Commission (NBTC), asking for the watchdog to prevent the deal over competition concerns. The financial newspaper also noted the Thai telecoms market is already significantly concentrated, with just three players (with AIS holding the largest market share – 46%), and that officials were worried a merger between dtac and True would result in higher bills for customers. Initial agreement between the pair was struck in November 2021. (See Telenor continues Asia M&A moves with Thailand merger deal.)

Speaking of regulatory scrutiny – in Italy, the national competition authority Autorità Garante della Concorrenza e del Mercato (AGCM) slapped Iliad Italia with a €1.2 million fine for allegedly providing unclear information on the use of 5G. The penalty came after an investigation that discovered the Italian telco advertised some offers as compatible with 5G but “totally omitting or providing unclear information” about the “indispensable conditions” for the use of the technology. For instance, the authority has found the operator failed to make clear that in order for consumers to use 5G as part of its promotional plans, they need to be located in a certain geographical area which is covered by the operator’s 5G network. AGCM also accused Iliad Italia of misleading customers about the use of a 100GB 5G plan when roaming in Europe, whereas the data allowance was only 6GB when the customers were roaming. See more in the regulator’s statement (in Italian).

The European Union’s member states and the European Parliament have agreed new rules to “limit the market power of big online platforms” in the Digital Markets Act, which has been agreed about a year after it was first proposed. The Act “targets large companies providing so-called ‘core platform services’ most prone to unfair business practices, such as social networks or search engines, with a market capitalisation of at least 75 billion euro or an annual turnover of 7.5 billion [euros],” the European Parliament noted in this announcement. If any relevant company breaks the new rules, “the Commission can impose fines of up to 10% of its total worldwide turnover in the preceding financial year, and 20% in case of repeated infringements. In case of systematic infringements, the Commission may ban them from acquiring other companies for a certain time.” Not surprisingly, ‘Big Tech’ did not react positively to the news, with both Apple and Google criticising the move, saying it will impact innovation and create barriers to the best business practices. Other companies that will be figuring out what the new rules mean for them include Amazon, Meta (FKA Facebook) and Microsoft. Read more.

The European Commission has also agreed with the US, in principle, a new Trans-Atlantic Data Privacy Framework. The agreement aims to “provide a durable basis for trans-Atlantic data flows, which are critical to protecting citizens' rights and enabling trans-Atlantic commerce in all sectors of the economy, including for small and medium enterprises. By advancing cross-border data flows, the new framework will promote an inclusive digital economy in which all people can participate and in which companies of all sizes from all of our countries can thrive.” Read more.

Interestingly, only days earlier, ZTE announced that its five-year period of probation, imposed by a US court after the vendor had been found guilty and fined billions of dollars for breaking trade sanctions related to North Korea and Iran, had ended. That doesn’t mean ZTE will now be welcomed with open arms in the US, but it’s remarkable that a reason wasn’t put forward to the United States District Court for Northern District Texas for ZTE’s probation to be extended. Did someone forget?

Singtel offloaded a 1.6% stake in Airtel Africa late last week as part of a “capital recycling” strategy that didn’t much help its fellow investors in the carrier, which has more than 122 million customers in 14 markets. Singtel sold its shares at 140 pence on the London Stock Exchange to raise £84 million, a move that wiped 10% off the value of the stock, which had been trading at 115 pence per share. That dive in value will have hurt Singtel too, as it still holds a 21.7% effective stake in Airtel Africa, comprising a 17.8% indirect stake through its holding in Airtel and a 3.9% direct stake, as it notes in this announcement.