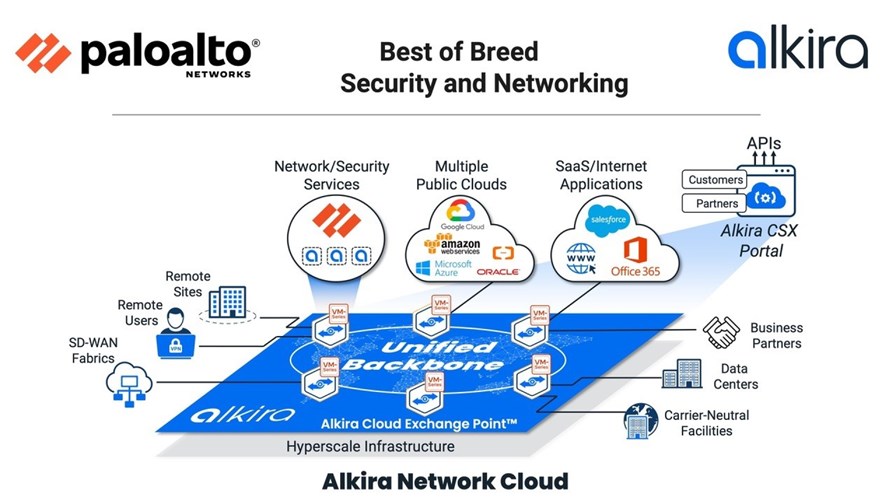 The cloud networking scene is a bustling and ever-changing one with literally dozens of companies coming to what they hope will be a party with what appear to be slightly different  ‘infrastructure as a service in the cloud’ offerings.  They all set out to do the same thing -  to ‘leverage’ the cloud to automate and hopefully simplify the fraught business of setting up and managing a business data network at scale - especially a multi-application, multinational, multi-cloud, one. The requirements around security, bandwidth, resilience, integration and so on are dizzying, but the prizes for companies that can make a decent fist of it promise to be enormous.

One contender which blipped onto our radar screen in 2020, is Alkira. The company  expanded the reach of its business model in December with the promise that it could extend cloud connectivity to any network, encompassing core data centres or edge or remote sites worldwide, and to any multi-cloud, in minutes and hours compared to six to 18 months. That was a big claim but one that had already attracted the attention of the giant private company, Koch Industries, which had put some money in along with other notable venture capital outfits like Sequoia Capital, Kleiner Perkins, and Google Ventures.

So today the big news, from Alkira’s point of view, is that Koch Industries has stepped up and put not just its money but its global network where Alkira’s mouth is.

Koch Industries, by the way, is one of the largest private companies in America with, according to Forbes, an estimated annual revenue of $115 billion. Network and cloud-wise its network infrastructure included seven global networks supporting thousands of applications, with tens of thousands of access points, hundreds of thousands of switch ports, and thousands of routers and switches, at over 700 sites.

With numbers like that it’s no surprising that Koch Industries’ networking arm was facing the usual complexity wall and wanted  greater agility, a requirement that became even more pressing through the past year as Covid had accelerated its shift to a secure network cloud.

Alkira’s boast is that it now takes the Koch team only minutes to configure Alkira’s network cloud and Palo Alto Networks VM-Series firewalls, and less than an hour to provision the solutions. The entire security network was set up in a few hours: a solution which serves approximately 120,000 Koch employees doing business in more than 70 countries.

I asked Alkira CEO and founder, Amir Khan, if he could tell me ‘this is essentially what it does’ in a sentence or two.

“Alkira offers network infrastructure as a service, meaning you can use our platform to build your global network infrastructure,” he said. “We provide capabilities so you can instantiate third party services such as, but not only, firewalls. The platform allows us to bring third party cloud services into our offering, as well as have customers use our own services. Within the network cloud we can bring those services up and then, based on the use cases, we can steer traffic through them as required.

“So the firewall is not the gateway,” he reiterates, “Traffic comes onto the platform and then we decide - based on use cases and policy - what traffic needs to get steered through a firewall and then on to its  destination.

“And we provide the full capabilities of managing the services. We manage the lifecycles, so the customer doesn’t have to worry about keeping, say, a firewall up. It only configures the virtual network with its own policies and rules, we do the rest. And we also manage the autoscaling to add firewalls and other services as throughput demands.

So does Alkira’s model represent an existential threat to carrier business models? Not necessarily. There is nothing to stop telcos adopting the model themselves, or, more likely offering their own applications and services on the platform. Also, Alkira, and models like it, can be thought of as channels to the corporate market for ‘concrete’ infrastructure providers.