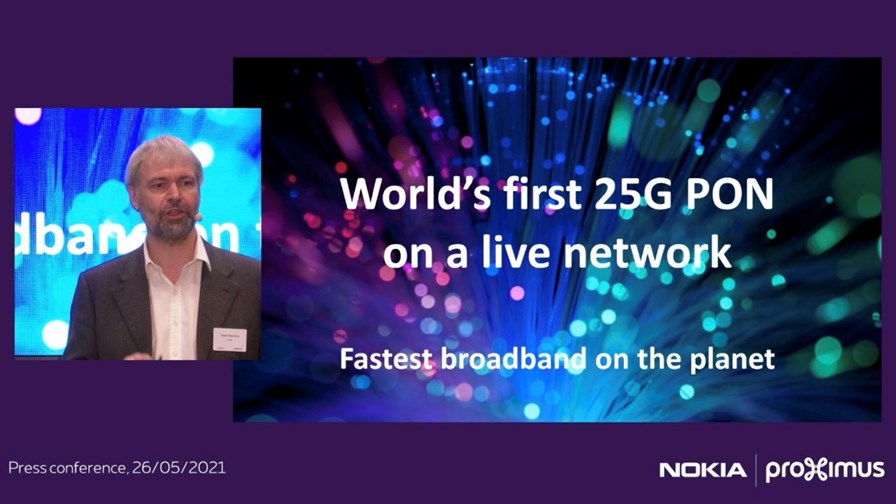 In today’s news roundup, Proximus hails a broadband breakthrough with Nokia, which has a lot of other things to share, while Xiaomi gains from Huawei’s woes.

Belgian national operator Proximus is claiming to have deployed the world’s “fastest fibre access network” with more than a little help from Nokia, which is enjoying a ramp in demand for next-gen fixed access network gear. The Belgian operator is deploying Nokia’s latest multi-PON line cards that enable operators to introduce new PON options without having to swap out the physical infrastructure and is boasting “the first ever 25G PON live network.” But while the partners use the term “network,” the current deployment is only between two locations in the city of Antwerp currently, with Nokia executives admitting during a webcast press conference today that its 25G PON tech still needed some work for large-scale deployments, but that it would be ready for large, prime-time rollouts in 2022, with enterprise and 5G backhaul applications expected to fuel initial demand. For more details, see this press release.

Nokia has been very busy this week… It has launched what it calls an AI “use case library” on Microsoft Azure public cloud platform, which, says the vendor, will allow CSPs to deploy an AI-enabled data project in just four weeks. “By integrating Nokia’s security framework with Microsoft Azure’s digital architecture, deployment is much faster while concerns around data sovereignty and security are eliminated and global regulations respected,” it notes in this announcement.

Also from Nokia… The vendor has unveiled new additions to its AirScale small cells portfolio for indoor and outdoor 5G coverage, including “enhanced hardware and support the majority of frequency bands, including requirements for C-Band spectrum in the US.” Read more.

And Nokia has won a deal from Malaysian operator Allo to provide the technology for a gigabit fibre network in the states of Melaka, Johor, Negeri Sembilan and the East Coast of Malaysia. Read more.

Chinese smartphone maker Xiaomi appears to be picking up the slack from beleaguered Huawei in the device market numbers: In the first three months of this year, Xiaomi says its sales and net profits “far exceeded expectations.” Revenues were up by almost 55% to RMB76.9 billion ($12 billion) and adjusted net profit came in at RMB6.1 billion ($950 million), an increase of 163.8% year-over-year. Find out more in this Xiaomi announcement. That isn’t the only good news for the company: In an embarrassing U-turn for the US authorities, a US court has overturned the decision by the Department of Defense that Xiaomi is a “Communist Chinese military company,” a ruling announced in January when Donald Trump was still President that would have barred US investors from trading in Xiaomi’s stock from November this year. Is the phrase “red faces all round” appropriate here?

Sandvine has unveiled what it calls its 5G Service Innovation and Intelligence portfolio, which is “designed to help service and cloud providers capture the 5G smart ecosystem opportunity and deliver exceptional digital experiences.” The portfolio includes a cloud-native 5G Service Intelligence Engine (aka Network Data Analytics Function, or NWDAF), pre-packaged use cases and “highly enriched real-time data and insights that provide value throughout the technology lifecycle. These capabilities help customers see, optimize, monetize and protect networks, as well as comply with regulations,” notes Sandvine in this announcement.

US private wireless network specialist Betacom has raised $15 million in funding and has launched what it claims is the first managed private 5G network service. Read more.

Will Huawei become a software-only company? That appears to be the aspiration of the Chinese vendor’s founder Ren Zhengfei, who sees that path as a way to avoid US sanctions, reports Reuters.