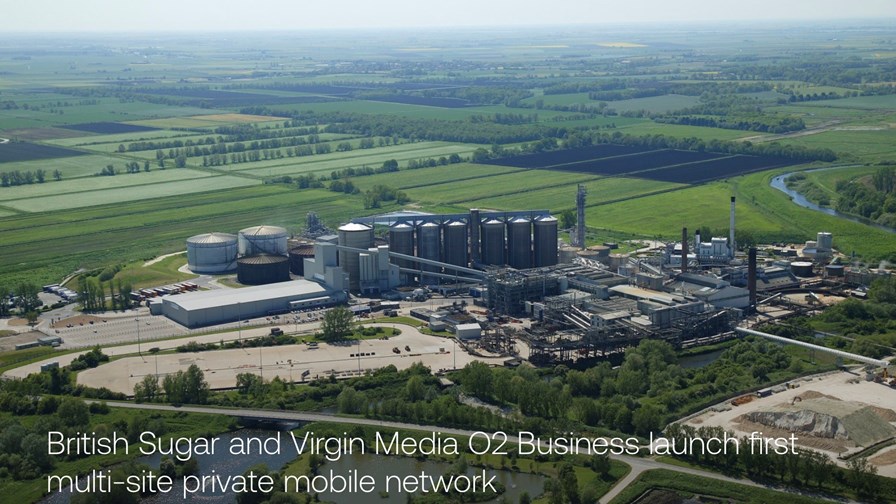 There’s been a steady stream of private network announcements and initiatives this week, with the icing on the cake coming courtesy of Virgin Media O2 Business, which has landed a deal to provide a dedicated 4G/LTE mobile network across multiple sites for British Sugar.

The move is tipped as a “first-of-its-kind” multi-site custom-built network launch and is boosted by a “multi-million-pound” seven-year tie-up between the operator’s business unit, British Sugar and strategic technology partner Nokia.

While Virgin Media O2 declined to disclose the exact value of the ambitious move, a representative told TelecomTV the operator will be tasked with providing “ongoing strategic consultation and support in developing smart factory use cases”, while Nokia will act as a provider of the underlying “low latency, ultra-reliable and secure private mobile network infrastructure”.

The private network has been already launched in British Sugar’s site in Wissington, Norfolk, and was already bearing fruit, the operator said in a statement.

Essentially, the custom-built network aims to bring a “factories of the future” upgrade to the sugar company’s four sites in the UK. To do so, it is set to connect multiple Internet of Things (IoT) devices and enable artificial intelligence (AI), automated production lines, robotics and drones to be involved in the manufacturing process.

AI will be used for monitoring operations in real time, and predicting maintenance and probable downtime. This will result in less disruption and wastage, and has the potential to deliver cost and energy consumption savings.

The current plan envisions the creation of more than 15 digital manufacturing use cases, but this number can grow as the network will be easily upgradable to 5G when British Sugar decides to implement more complex processes which will require next-generation capabilities, such as using robotics, driverless ground vehicles and connected drones.

Jo Bertram, Managing Director at Virgin Media O2 Business, explained private networks are “a big part of building the connected factories of the future, so British manufacturing can keep pace with the rest of the world”.

“By continuing to invest in smart tech, connectivity and innovation – and with a 5G upgrade in the plans – British Sugar is blazing a trail for the industry”, she added.

And yesterday, Australian operator Telstra tapped a partnership with Ericsson for the deployment of an on-premise dedicated 5G network for enterprise, while Germany and France unveiled a €17.7 million combined investment on four projects that develop private wireless network applications.

Private networks also looks likely to be one of the hot topics at the upcoming MWC22 show in Barcelona: See SCOPE – the five hot trends for MWC22.