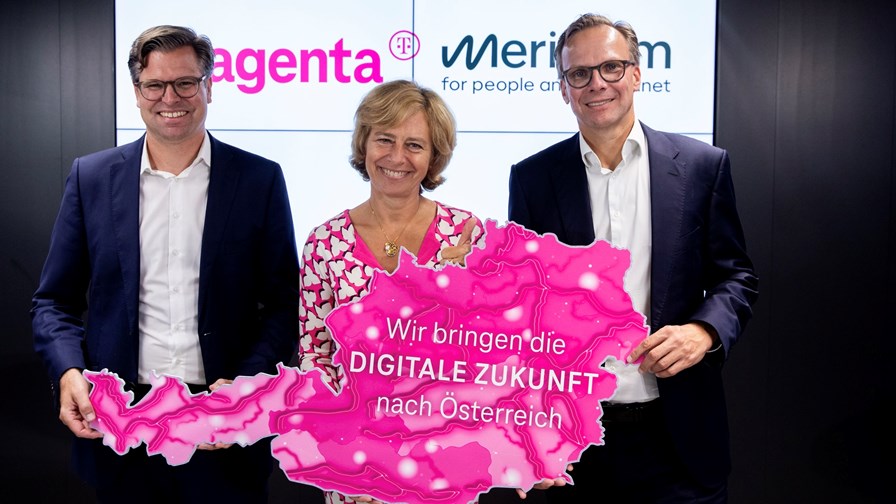 The Deutsche Telekom subsidiary announced that its joint fibre investment with Medidiam will reach more than 650,000 households and business premises in rural areas by 2030. The partners, which will make the network open to other broadband service providers, will also explore opportunities for public funding to help pay for the rollout.

Claiming the move will be “Austria’s largest private fibre roll-out initiative”, Magenta Telekom said the project will begin this year and that deployments are not reliant on any area having a particular number of committed customers ready to sign up for services.

The operator noted that the partnership with Meridiam guarantees a “dedicated and flexible roll-out with no additional costs or complications for local communities” that will be completed “within a record six years”.

Magenta Telekom CEO, Andreas Bierwirth (pictured above, right), boasted the joint move with the investment company will turn the “Alpine Republic into a digital republic”. The move, in his words, is also part of the operator’s efforts to be “the leading high-speed network provider”: It has already upgraded its existing fibre network to 1 Gbit/s speeds in recent years, and already claims to be “Austria’s largest and fastest growing gigabit provider, with 1.5 million households and businesses served” through cable broadband and fibre connections.

Stephan Wehrmann, business development director for Germany at Meridiam (pictured above, left), said the investment company is committed to delivering “sustainable infrastructure” and saw the move as one that will “make a long-lasting positive impact on society.”

The company has been investing in infrastructure projects in Austria since 2005, including pouring more than €150m to bring fibre to as many as 60,000 households in Austria’s largest district, Liezen.

The Austrian market is “very important” for Deutsche Telekom as well, according to Dominique Leroy, board member for the European segment of the German operator group (pictured above, middle). She added that a total of 2.5m customers will be “gigabit-enabled” by 2030 through various initiatives, including a move by Magenta Telekom announced in February to invest €1bn to expand its fixed and mobile network. This brings the total tally to €2bn for bringing fibre internet and 5G coverage to up to a million new premises.

As the world steadily embraces digital services and products, expectations are rising when it comes to capabilities of internet speeds, capacity and reliability. Therefore, it’s far from surprising to see a plethora of moves by CSPs to deploy fibre extensively. And, as is the case with any race, competition to be first to offer fibre-based broadband and 5G connectivity heats up.

In Austria, the Magenta/Meridiam tie-up (which still requires European Union regulatory approval) comes just a week after national operator A1 Telekom Austria (A1) struck a major wholesale deal with Hutchison Drei Austria (Drei) that allows the mobile operator to use A1’s fibre network – which, at some 67,000km, is claimed to be the largest broadband network in the country – to add FTTH services to its portfolio.

Such deals are “increasingly important in the Austrian telecommunications sector”, according to A1, therefore both companies claim to have their doors open for partnerships with other operators in the country.

A1 CEO Marcus Grausam explained that the operator is investing more than €500m in expanding its digital infrastructure and it wants to ensure it is “optimally used” by striking wholesale access deals with companies such as Drei.

According to Rudolf Schrefl, CEO at Drei, the fibre partnership between the pair is “trendsetting”. He added that this will bring down the price Drei’s customers pay for internet services in the future. More on this partnership is available here (in German).

And the fibre rollout action isn’t limited to these companies: Allianz Capital Partners announced late last year that it is investing €1bn in the fibre rollout plans of Österreichische Glasfaser-Infrastrukturgesellschaft, aka öGIG, to help it reach 1m Austrian premises – see Allianz ploughs €1 billion into Austrian FTTP.

Austria isn’t the only market where Deutsche Telekom has teamed up with an investor partner for fibre broadband rollouts. In Germany it hooked up with IFM Investors for the creation of GlasfaserPlus, a joint venture valued at €1.8bn. The plan is to connect 4m premises in rural areas with fibre by 2028, adding to Deutsche Telekom’s goal of bringing gigabit connectivity to 10 million households by 2024 – see Deutsche Telekom attracts €900m co-investor for rural fibre rollout.

In 2019, it partnered with energy and telecommunications company EWE on a joint venture that aims to deliver fibre access lines to 1.5m households and business locations in Germany: That joint investment is worth up to €2bn over ten years.