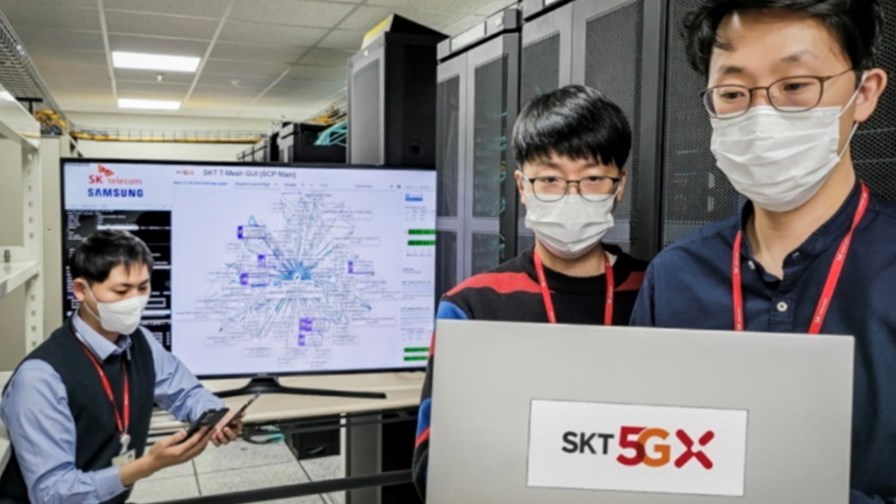 5G core developments in South Korea, a broader role for Mavenir at Dish Network and an acceleration of Vodafone’s environmentally-friendly efforts are the top of today’s substantial news nugget pile.

Samsung and SK Telecom say they have pooled their respective R&D efforts to jointly develop and trial a highly efficient and adaptable next-generation, standards-based 5G core system. The system brings together Samsung’s cloud native 5G core technology and the operator’s Service Communications Proxy (SCP), which, the partners claim, “enables operators to manage their 5G networks more effectively and efficiently.” According to SK Telecom, SCP “intelligently controls [the] communication of NFs [network functions] based on traffic status and behavior. That is, it allows only necessary NFs to communicate with each other depending on the network traffic, thereby saving resources.  Samsung and SKT have successfully completed the interoperability trial between SKT’s cloud native SCP and Samsung’s cloud native 5G core, and were able to prove that, with SCP, the communication efficiency among NFs has improved by 30%.” See this press release for more details.

Dish Network, which is building an Open RAN-based greenfield 5G network in the US, has expanded its relationship with Mavenir to include the vendor’s “cloud-based carrier messaging solution, which leverages Rich Communication Services (RCS) and Messaging-as-a-Platform (MaaP) technologies.” RCS, of course, is the oft-maligned messaging platform that, according to a recent report, could help operators drive incremental revenues from advertisers and other third parties. Mavenir had already landed a deal in Apri this year to supply Open RAN software to the operator. For more details on the messaging platform deal, see this press release.

Vodafone believes it can reduce its total global carbon emissions to ‘net zero’ by 2040, 10 years earlier than its previous deadline: By that year, the operator aims to have eliminated all carbon emissions from its own activities and from energy it purchases and uses (Scope 1 and 2), as well as cutting to zero its emissions from “Scope 3 sources, including joint ventures, all supply chain purchases, the use of products it has sold and business travel.” See this announcement for more details.

Nokia has struck an IoT platform deal with China Mobile that will see the Chinese operator use the vendor’s Worldwide IoT Network Grid (WING) managed service to support the needs of enterprise users in China and international markets.

Nokia has also announced a wide-ranging 5G engagement with Canadian operator Telus, including the supply of edge routers, policy control and subscriber data management tools, indoor picocells and more. The Finnish vendor was previously announced as one of three 5G RAN suppliers to Telus.

Huawei has, predictably, been putting its case for the UK reversing its Huawei policy now that President Trump is seemingly in the final stretch of his White House tenure. An interview in the UK’s left-leaning Guardian newspaper has Huawei’s Victor Zhang identifying a further widening of the UK’s north/south divide as a consequence of locking Huawei out of the UK’s 5G networks. We’re not sure that approach is a particularly good one, as it bears all the hallmarks of being chosen to appeal to the Guardian community more than to the UK’s Conservative government.

2019 was a bad year for research and development in the UK telecoms industry. In 2018 it grew at 25.4 per cent, but last year it was less than one per cent. What 2020 will turn out to have been like is anyone's guess. R&D tax relief specialist Catax says spending hit £947 million in 2018 and rose to just £956 million in 2019, up a mere 0.95 of a percentage point. To put things in perspective, back in 2008, the year of the global financial crash, UK telecoms R&D spend was £1.4 billion. What the impact of Covid-19 will be eventually is far from clear. Although some research will have been discontinued or gone by the board altogether, work on disciplines such as 5G, handset development, Open RAN and quantum computing continues more or less unabated, so overall, things may, in the end, not be as bad as might be expected. Unsurprisingly, the pharmaceutical sector has enjoyed the biggest increase in R&D expenditure, rising by 3.3 per cent to £4.8 billion. Across all the UK's business sectors R&D spend has grown overall and is now worth £25.9 billion. Cafax says the UK currently has 263,000 people employed full-time in R&D, but only 10,000 of them are in the telecoms sector.

The German government is having a hard time trying to reach consensus over what might constitute a security threat pressing enough to exclude a vendor’s equipment from its national networks - in other words ‘how do you solve a problem like Huawei’? According to Euractive, the latest version of the German IT Security Law follows months of wrangling in Chancellor Angela Merkel’s coalition – and it’s not over yet.

BT goes all "shipshape and Bristol fashion”: As solid concrete evidence of its confidence in and commitment to the future, BT, the UK's incumbent telco, has announced it is to build a massive new office complex in the centre of the historic, prosperous and trendy West Country city of Bristol. The 13-storey building will be sited close by Bristol's impressive main railway station, "Temple Meads", built in the late 1830s by the immensely original and influential Victorian engineer Isambard Kingdom Brunel, the man who also built the world-famous Clifton Suspension across Bristol's Avon Gorge. Some 2,000 of BT's 7,000 Bristol-based employees will move into the Assembly Bristol building in early 2022. The new office is part of BT's long-term plan to reduce the number of its offices across the UK from 300 to 30 by 2023. For centuries Bristol has been at the forefront of technology and engineering and back in 1809 the city was transformed by the opening of the "Floating Harbour". More than 80 acres of tidal river was dammed and locks were built to allow visiting ships to remain afloat the entire time they were in port. Prior to that Bristol's huge daily tidal range of 40 feet meant that on every tide the ships in the harbour were left high-and dry for hours at a time. As the tide ebbed vessels literally keeled over in the mud straining timbers and causing damage to rigging and masts. Any cargo, stores and maritime fitments not properly and comprehensively lashed down would cascade from one side of the heeling ship to the other. Everything had to be stowed away securely and the decks kept clear, hence the phrase "all shipshape and Bristol fashion". As Sir Michael would say, "Not many people know that…”

Ambitious French operator Iliad has been successful with its €2.2 billion takeover bid for Poland’s Play, as shareholders representing 96.7% of the Polish operator’s shares have accepted Iliad’s offer. “This acquisition represents an important step for Iliad, which now has 42 million subscribers in Europe across France, Italy and now Poland,” stated Thomas Reynaud, Chief Executive Officer of Iliad in this press release.

Joe Biden’s presidential transition team is using Google Workspace and Titan Security Keys in lieu of email and cybersecurity services offered by the US General Services Administration (GSA), according to a report from The Wall Street Journal. Team Biden has also reportedly enrolled in Google’s enhanced protection programme for ‘high risk’ accounts. For additional details, see this Forbes story.