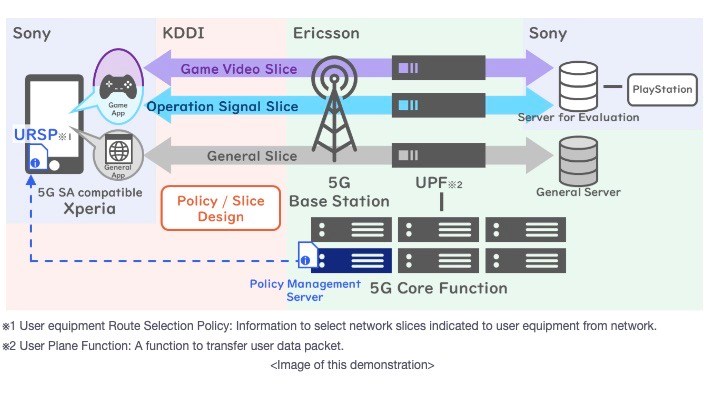 Japanese telco KDDI and consumer electronics manufacturer Sony claimed to have achieved the world’s first demonstration of using multiple network slices separately for one application on a standalone (SA) 5G network. In a joint statement, the two companies explained that the showcase, which was conducted on a single device, has confirmed that “smoother gameplay can be achieved by using network slices that have different properties for video signal and control signal, respectively”. In the demo, the pair used a 5G core network and Sony Xperia smartphones compatible with user equipment route selection policy (URSP). Going forward, URSP and customised network slices are set to “allow for reliable communication with low latency, and video signals will be optimised according to the wireless environment, enabling even more stable game play even when the wireless environment changes,” KDDI and Sony noted. The pair’s move is motivated by efforts to create new entertainment services and business use cases based on 5G SA. The demo was carried out in collaboration with Ericsson, which provided its 5G core equipment for the purpose. “This significant achievement with KDDI, an important customer of ours, and Sony, a key partner, paves the way for all sorts of applications in network slicing,” commented Chris Houghton, SVP and head of Northeast Asia at Ericsson, in a separate statement.

The UK population increasingly has access to fibre broadband services following a “record” rollout throughout the country, but still only a fraction is sold on the idea of upgrading to take advantage of faster connectivity speeds. This is the conclusion of Ofcom, the state telecoms regulator, in its annual Connected Nations report. A total of 12.4 million households can access a full-fibre connection, an increase of 4.3 million from 2021. However, despite rising deployments, only around 25% of households are signing up to fibre broadband services. The watchdog doesn’t offer any suggestions as to why uptake is so low, but it might be linked to pricing. Ofcom did, however, suggest that customers who have not committed to a contract “could potentially upgrade to a discounted full-fibre package without paying more than they currently do”. In addition to full fibre, people can also make use of upgraded cable networks to benefit from at least 1Gbit/s download speeds. Ofcom has found that in total, gigabit-capable broadband is available to 70% of the UK (amounting to nearly 21 million homes), via a range of technologies, up from 47% last year. Still, the authority recommends that full fibre is the optimal solution for households that “need to stream, work, game, video-call and study online all at the same time”. Another finding shows that almost the entire country (97% of all homes) can get “superfast broadband”, which it defines as any broadband connection with download speeds of a minimum of 30Mbit/s, but around a quarter (27%) of those with access to such services have not yet taken it up. Almost 80,000 homes and businesses (especially in hard-to-reach areas) lack access to, as Ofcom puts it, “decent” broadband with download speeds of 10Mbit/s and upload speeds of 1Mbit/s. Moving away from fixed access, Ofcom estimated that around seven in every 10 UK properties are located in areas with 5G availability from at least one mobile network operator, as rollouts of the technology are ramping up.

Still with Ofcom… The watchdog has slammed Sepura, a UK telecommunications equipment provider, with a £1.5m fine for an alleged breach of competition law. Following a probe, which began in June 2019, the telecoms authority has decided to impose the penalty after finding Sepura “exchanged commercially sensitive information with competitor Motorola about pricing intentions during a procurement process” back in September 2018. This information exchange related to a tender process for devices and services for use on Airwave, a private mobile radio network used by the UK’s emergency services. “We have concluded that this exchange of messages had the object of restricting or distorting competition in the supply of TETRA [Terrestrial Trunked Radio] devices, accessories and related services for use on the Airwave network in Great Britain, and affected trade within the UK”, noted Ofcom. Sepura was the only company to be hit with a financial penalty as Motorola was the first to come forward about the anti-competitive practice, which granted it immunity from fines as per the Competition and Markets Authority’s policy. Read more.

Historical times for Brazilian operator Oi! The company has resurfaced from a six-year bankruptcy, putting a stop to the biggest ever reorganisation process in the Latin American country. Oi went bankrupt in 2016 when its debt amounted to $19bn. But yesterday, it announced an end to the process after a Brazilian court concluded that the company has complied with its debt commitments. In a public note to investors, the telco claimed to have “substantially” reduced its debt to‎ 18.3bn Brazilian real (BRL) (US$3.5bn) at the end of the third quarter of 2022, after completing various steps, including selling its non-core assets - such as offloading datacentres, selling mobile towers and trading its mobile business to Telecom Italia’s Brazilian subsidiary, VIVO (Telefônica Brasil) and Claro. The company explained it has also settled all its debts with state development bank BNDES, a move it argued has helped the telco to launch its fibre optic broadband operation, which today ranks as “the second largest in the country with around four million users”. Now that this dark chapter of its history is closed, Oi is eager to execute its strategy and fulfil the remaining obligations within the reorganisation process. To do so, the company shared that it is “exploring all available alternatives to restore its sustainability and long-term feasibility”. It plans to accelerate its core business revenues, create new revenue streams, undergo organisational transformation and adapt its cost structure. As such, the resurrected company will consist of Oi Fibra, covering the consumer and small and medium enterprise markets; Oi Soluções, a unit that integrates IT and connectivity solutions for large companies in the B2B market; and shared control of wholesale fibre network V.tal.

As part of the Shared Rural Network (SRN) initiative, Three UK and EE have, separately, taken steps towards fulfilling connectivity gaps across the country. Three UK noted it has “put the first spade in the ground on the first joint site” of the SRN, located on Scotland’s Isle of Mull. The site is expected to be live in early 2023 when it is set to deliver connectivity not only to Three UK’s customers but also to Vodafone and Virgin Media O2 subscribers. This is part of a larger programme to build 66 sites across Argyll and Bute, boosting geographical 4G coverage from 56% of Scotland’s landmass to at least 72% by 2024. Three UK will also begin construction on other two sites, one in Argyll and Bute, and another in Aberdeenshire, before Christmas. Meanwhile, BT’s mobile division, EE, claims to have built or upgraded more than 500 4G sites across the UK since December 2021, as part of the SRN programme. According to the company, its has upgraded a total of 1,362 sites since the SRN deal was sealed in March 2020. EE has also pledged to make another 900 upgrades to UK rural areas by 2024. As the year draws to a close, Vodafone and Virgin Media O2 remain tight-lipped on their SRN progress. But, to amend the lyrics to a popular Meat Loaf song: Two out of four ain’t bad.

Turkish telco Turkcell is now able to distribute its messaging platform BiP in Pakistan after securing a partnership with international operator Veon (which has mobile network operations in markets across Asia, Europe and Africa). The service will be made available through Jazz, the local division of Veon, to all 194 million mobile subscribers in the South Asian country, according to Veon. “Expanding our digital services is a critical growth factor for Turkcell, as we try to deliver on the evolving needs of our customers,” commented Turkcell CEO, Murat Erkan, adding that following an expected usage growth in Pakistan, the pair will aim to broaden the service’s availability to more of Veon’s operating countries. Veon’s group CEO, Kaan Terzioğlu, described the messaging platform as “an excellent service that is already proven in different parts of the world”, adding that its expansion in Pakistan by Jazz will benefit both users and the digital ecosystem. See more.