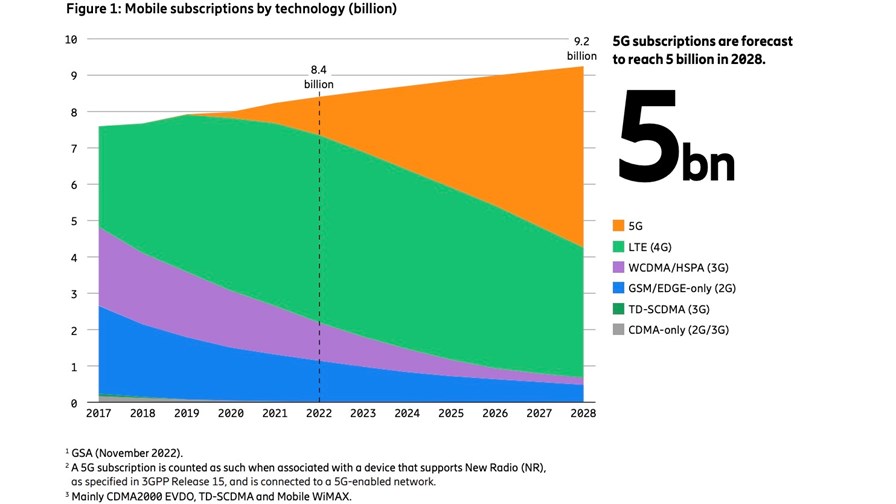 Ericsson has shared its latest market forecasts, with the giant Swedish vendor expecting global 5G subscriptions to grow from 1 billion by the end of this year to 5 billion by 2028, accounting for about 55% of all mobile subscriptions “despite current and developing economic challenges in many parts of the world”. By the end of September this year, the world’s network operators, almost 230 of which have launched 5G services, had signed up about 870 million 5G customers, with some 110 million being added during the third quarter (July-September). A key driver of the current growth is, of course, China, where all three major operators have been investing in 5G networks and offering 5G “packages” to customers… so successfully, in fact, that the reported number of 5G packages sold had already exceeded the 1 billion mark by the end of October. It’s understood that the sale of a 5G package to a customer in China doesn’t mean that the customer is then immediately using any 5G services, it’s just that the option to do so is included in the service sold, so the Ericsson team is having to do some interesting calculations to include China in its 5G numbers. It does note in its report, though, that for the purposes of its calculations, “a 5G subscription is counted as such when associated with a device that supports New Radio (NR), as specified in 3GPP Release 15, and is connected to a 5G-enabled network”, and has calculated for the purposes of its research that China is set to account for 644 million of the 1 billion 5G subscribers expected by the year's end. The latest report includes a specific forecast for 5G in India, where Reliance Jio and Bharti Airtel have just started launching their services. According to the Ericsson team, “rapid 5G deployments by Indian service providers will enable 5G subscriptions to reach around 31 million by the end of 2022 and 690 million by the end of 2028,” with 5G accounting for “around 53% of mobile subscriptions [in India] at the end of 2028.” Read more.

The planned merger of Malaysian operators Celcom and Digi by their respective parent companies, Axiata and Telenor, has finally been completed, creating the country’s largest mobile operator, which is valued at US$10bn. Axiata and Telenor will each hold a 33.1% stake in the new entity, Celcom Digi, which will have about 20 million customers and annual revenues of around 13bn Malaysian ringgits (MYR) (US$2.9bn), based on combined numbers from 2021. “Celcom Digi is strategically poised to invest in network expansion and support the growth of Malaysia’s digital ecosystem,” stated Axiata Group chairman, Tan Sri Shahril Ridza Ridzuan. “We are also heartened at the role this tech giant can play in spurring talent development here in our very own backyard, as Malaysia charts advancements in 5G innovations, automation, IoT, AI and cyber resilience, among others. Moving forward, I am confident that Celcom Digi – backed by the global experiences, excellent governance standards and financial strengths of Axiata and Telenor as shareholders, is well placed to serve Malaysian consumers and enterprises seeking to step up on digital competitiveness in the current era,” he added. According to the parent companies, Celcom Digi is set to invest “up to” MYR250m ($56m) over five years in building a “world-class innovation centre” in Kuala Lumpur. “The aim is to catalyse the 4IR [fourth industrial revolution] digital transformation and strengthen the local ecosystem through the adoption of IoT, AI, cloud computing and 5G. Bridging the digital divide in rural areas to spur greater socioeconomic participation will be a priority,” the duo noted. The merger has been long in the making, but the details were first finalised in June 2021 when both Axiata and Telenor knew they would have some major regulatory hurdles to overcome to get the deal completed. But, even amid the turmoil of Malaysia’s emerging 5G sector, the marriage vows have finally been taken and Celcom Digi will begin life as the country’s largest mobile operator from 1 December.

Wipro has teamed up with Verizon Business to develop a network-as-a-service (NaaS) offer for enterprises that will include “a range of pre-configured and tested service chains on a subscription-based consumption model, designed to drive network consumption infrastructure on demand,” noted Verizon in an announcement about the new partnership. Wipro aims to “transition customers from legacy cycles of deploying hardware, applications and services to an automated, self-healing, and highly secure network service environment.” Read more.

The global market for mobile core platform technology is still faltering, with the value of the market in the third quarter dipping year on year, despite the launch of nine additional 5G standalone (SA) networks during the July to September quarter, according to research house Dell’Oro Group. “The China region had a positive year-on-year growth rate for the quarter, but it was not enough to offset the decline in the rest of the market,” stated Dave Bolan, research director at Dell’Oro Group, as investments in legacy mobile core network and IP multimedia subsystems (IMS) declined. The nine new 5G SA launches during the third quarter were at Bell (Canada), AT&T and Verizon (US), stc Bahrain, Telekom Deutschland, Optus (Australia), and Claro, TIM and Vivo (all in Brazil), though Bolan noted that “many of these new 5G SA networks recently launched were not countrywide, limiting the growth”. Dell’Oro did not publish a value for the market in the third quarter, but the mobile core market is believed to be worth in the region of $2bn to $2.5bn per quarter.

Samsung has expanded its 5G Open RAN engagement with NTT Docomo by supplying a range of new radios – including those supporting the 3.7GHz, 4.5GHz and 28GHz bands – to the Japanese operator in addition to the existing 3.4GHz radio it already supplies. The companies have also been “testing the interoperability of these new radios with basebands from various vendors in NTT Docomo’s commercial network environment,” noted Samsung in its announcement about the expanded relationship. “We have been collaborating with Samsung since the beginning of 5G and through our Open RAN expansion, and we are excited to continue extending our scope of vision together,” noted Masafumi Masuda, vice president and general manager of the radio access network development department at NTT Docomo. “Solidifying our global leadership, we will continue to build momentum around our Open RAN innovation and to provide highly scalable and flexible networks to respond quickly to the evolving demands of our customers,” he added. Samsung was named as a 5G equipment provider to Docomo in March 2021. To find out more about NTT Docomo’s Open RAN rollouts and how they fit into its 5G strategy, check out this recent interview with the operator’s global head of Open RAN solutions, Sadayuki Abeta.