The 5G race is far from over, declares President Trump 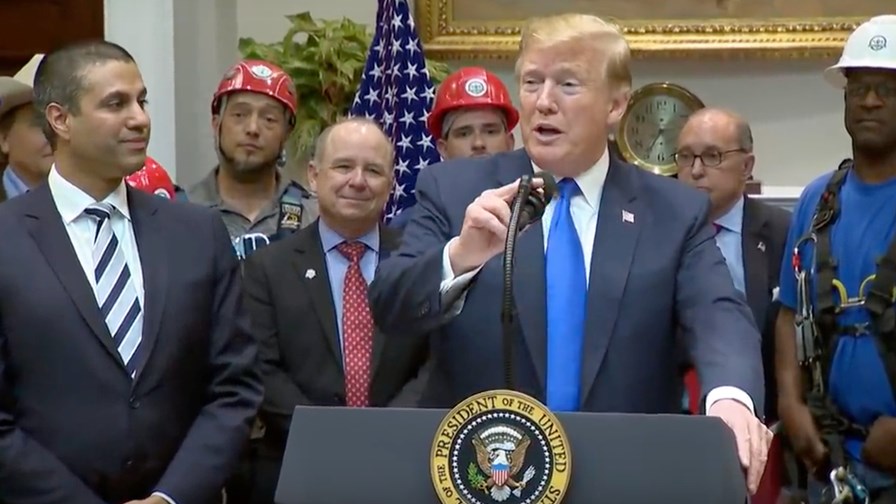 What is it with the obsession to be “first” with 5G? Okay, so we have switched on some 5G NR sites covering half a city block and have a few pre-commercial compatible fixed wireless hotspots to give to friendly customers. That means we are first; we have won The Race to 5G. Game over, let’s all go home now.

In fact, the only thing that surprises me more than the obsession to be first is the incredible fact that no-one has yet registered the domain “theraceto5G.com” – so be our guest, go ahead and register it now, before the race is well and truly over. You should still be able to get it for $2.99.

Perhaps the White House should snag the domain, given its press conference and meetings last Friday. “President Donald J. Trump is taking action to ensure that America wins the Race to 5G,” proclaimed a White House press release, announcing to the world that “thanks to President Donald J. Trump, America is now leading the global race to deploy secure and reliable 5G.” Right.

That’s right, FCC Chairman Ajit Pai was standing next to the President and basking in his glow, although what he thought about 6G was not reported, thank goodness. He did, though, provide some details of the regulatory commission’s next steps.

“America must win the race to 5G,” decreed Pai, citing two key reasons. First, “national competitiveness” in terms of the economy and second because “5G will improve Americans’ lives in so many ways.” Citing various research reports and industry association declarations, Pai added that “5G is a success story — an American success story.”

However, he adds that more needs to be done, and used the opportunity to announce two new FCC initiatives. In December this year the Commission will start its third 5G spectrum auction, selling off 3,400MHz of bandwidth across three mmWave frequency bands – 37GHz, 39GHz and 47GHz. The FCC also intends to create a new $20.4 billion Rural Digital Opportunity Fund to help extend broadband to up to four million homes and small businesses in rural America.

Just over a year ago, President Trump appeared to be favouring a nationalised 5G networks – you can read about the furore that caused here – thanks to the leak of a 6-page PowerPoint presentation and a 24-page memo by a senior National Security Council official. On Friday he finally quashed that idea. He would rather the private sector spend the estimated $275 billion on building 5G networks.

“As you probably heard, we had another alternative of doing it; that would be through government investment,” announced the President. “And leading through the government, we don’t want to do that because it won’t be nearly as good, nearly as fast.”

The clarification was warmly welcomed by the CTIA industry group.

“Today’s statement by the President puts an end—once and for all—to any misguided notions of nationalising spectrum resources or government-mandated wholesale 5G markets,” said Meredith Attwell Baker, President and CEO of the CTIA, adding that the US wireless industry has invested $226 billion in infrastructure over the last nine years.

So, back to “the race” and another dig at Huawei (although the company wasn’t mentioned by name). President Trump concluded by saying that by the end of this year, the United States will have 92 5G deployments in markets nationwide, and that the next nearest country, South Korea, will have 48. The definition of “deployments” was left unspecified.

“But we must not rest; the race is far from over,” said President Trump. “American companies must lead the world in cellular technology. 5G networks must be secure. They must be strong. They have to be guarded from the enemy — we do have enemies out there — and they will be. They must cover every community, and they must be deployed as soon as possible.”

5G has now become heavily politicised; we should get used to the fact. Politicians around the world will be using it to support a variety of policies – not all of them in the interests of our telecoms industry. Now, will someone please go register theRaceto5G.com before the chequered flag gets waved and we start on “number 6”? Sounds like an ideal website for Huawei…