Today Sprint (NYSE: S) and Google announced that they will expand their Mobile Virtual Network Operator (MVNO) partnership to include 5G. As part of Google and Sprint’s continued collaboration, both parties have committed to delivering innovative technology to Google Fi customers, enabled by 5G services from Sprint. 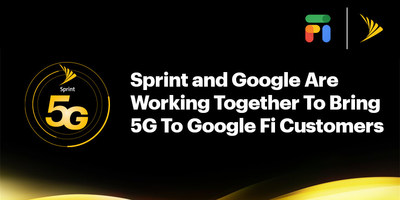 With Sprint’s 5G technology that uses the 2.5 GHz spectrum and cutting-edge Massive MIMO radio technology, there will be a dramatic increase in network capacity and density which is designed to deliver the fastest connections with significant improvement in latency. When this rolls out, Google Fi customers with Sprint 5G compatible Designed for Fi phones in a 5G coverage area will be automatically connected to the network, quite similar to today’s seamless transitions between cellular networks, depending on the location.

Google Fi, Google’s wireless service that uses intelligent technology to give their customers the best available network using a combination of wireless providers and Wi-Fi where available has been active on the Sprint network since 2015.

"We are incredibly excited to expand our existing relationship with Google to include 5G," said Jan Geldmacher , president of Sprint Business. "This announcement also showcases our dedication to collaborating with Google as we prepare to launch one of the world’s first mobile 5G networks covering multiple major cities."

"Connecting our customers to great high speed coverage is a vital part of the Google Fi service, made possible by our carrier partners," said Matt Klainer , Vice President of Consumer Communications Products at Google. "We’re thrilled to have Sprint working towards an upgrade for the Fi network to include 5G."

Sprint 5G Launching in First Half of 2019

Sprint is executing its award-winning 5G strategy with 2.5 GHz spectrum and Massive MIMO technology to launch its blazing-fast service beginning in nine top cities in the first half of 2019. They include Atlanta , Chicago , Dallas , Houston , Kansas City , Los Angeles , New York City , Phoenix and Washington, D.C. From the start, the company is designing mobile 5G footprints covering these downtown metros. Using its super-fast, mid-band 2.5 GHz spectrum, Sprint plans to offer coverage in the downtown area of these cities for its highly mobile, on-the-go customers.

Sprint’s 5G build out is well under way with hundreds of Massive MIMO radios deployed last year. Massive MIMO is a breakthrough technology that dramatically improves the capacity of Sprint’s LTE Advanced network with equipment that is software upgradable to 5G. Sprint’s 64T64R Massive MIMO radios support split-mode, enabling the company to offer LTE and 5G simultaneously on the same radio. Initial results from early deployments show Massive MIMO is driving a 4X average increase in capacity and speed with peak increases up to 10X over LTE. With Massive MIMO at the foundation of its mobile 5G service, Sprint can keep meeting its customers’ demand for unlimited data and high-bandwidth applications.

5G promises new levels of innovation and progress to connect people, places and the billions of things Sprint customers do with blazing-fast speed and ultra-reliable wireless connectivity.