LAS VEGAS , Jan. 8, 2019 /PRNewswire/ -- The city of Greenville, South Carolina will work with Sprint (NYSE: S) to build out smart city infrastructure and ecosystem, set to leverage the power of 5G and the ground-breaking Sprint Curiosity™ IoT. The announcement, made at CES® 2019, entails the installation of innovative Massive MIMO technology, dedicated IoT network technology and more across the city. 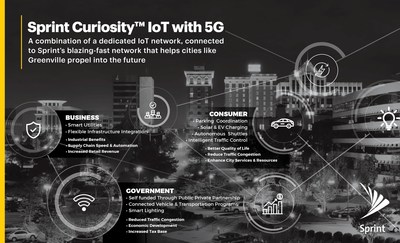 "Greenville government officials and staff are placing their trust in Sprint to power what will be one of the most forward-thinking smart city ecosystems on the planet, leveraging the power of Sprint mobile 5G and Curiosity IoT networks to bring smart city use cases to life," said Ivo Rook , senior vice president, IoT & product development at Sprint. "We are proud to be supporting the fourth fastest growing city in the country to develop the infrastructure of the future."

Concepts will be a reality with 5G network and "micropositioning" technology enabling connected vehicles, autonomous drones and any other smart machines to operate, navigate and react in real time, in a dedicated area of the city. Leading companies including Smart Greenville, W8less and LG, among others, are working together to bring exciting ideas to life. Together, new technology in the city will attract digital start-ups and research and development in autonomous, AI and robotics.

"Cities used to invest in roads, rails and airports; the infrastructure of the future to attract investment is digital," said Knox White, Mayor of Greenville, S.C. "Sprint’s Curiosity IoT with mobile 5G is readying cities to attract the business of the future."

Release 16 brings the full power of 5G one step closer