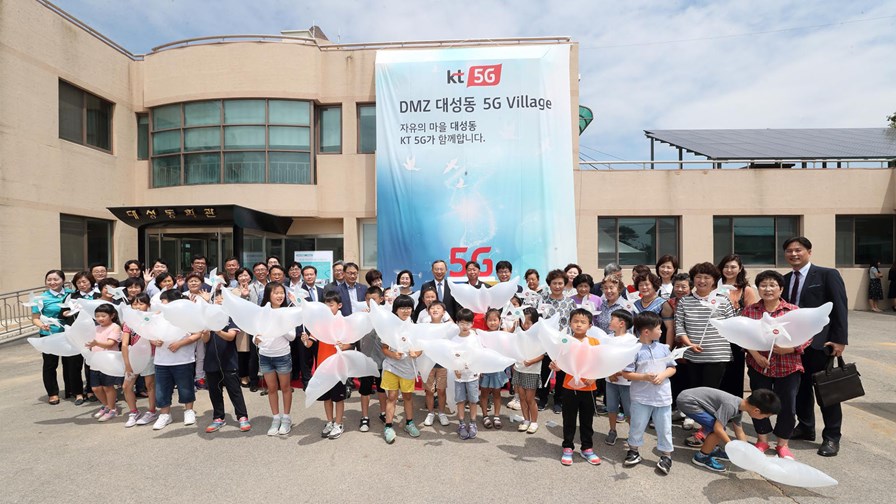 KT Corporation (KRX: 030200; NYSE: KT) , South Korea’s largest telecommunications company, has expanded its world-first nationwide commercial 5G network to include an isolated village in the Demilitarized Zone (DMZ), which is only 400 meters (437 yards) away from the North Korean border.

KT held an opening ceremony yesterday for its 5G village in Daeseong-dong, or Freedom Village, the only town located on the South Korean side of the 4-km (2.4 mile) wide DMZ. The ceremony was attended by KT Chairman Hwang Chang-Gyu, residents, elementary school teachers and their students, and Joint Security Area (JSA) soldiers.

South Korea became the first country in the world to bring 5G into reality on April 3, after Chairman Hwang laid out the company’s vision for the world’s first commercial 5G network at the Mobile World Congress (MWC) in 2015, 2017 and 2019. KT also officially sponsored the 2018 PyeongChang Winter Olympic Games to showcase the world’s first 5G trial services.

“We hope that KT’s 5G Village will greatly improve the lives and safety of residents,” Chairman Hwang said at the opening ceremony of DMZ Daeseong-Dong 5G Village. “As our mission states, KT will continue its support and commitment for this village and its people to contribute to peace on the Korean peninsula as well as South Korea’s global 5G leadership.”

KT’s 5G village in the DMZ provides various 5G network-based ICT solutions to improve the daily lives of residents in the areas of welfare, education and tourism. The company has set up the main control center at the town hall to oversee energy efficiency, air quality and smart farming through the 5G network connecting all 46 households across the village.

5G Village in the DMZ’s Daeseong-dong is part of KT’s efforts to develop ICT infrastructure for people in isolated areas. The opening comes before U.S. President Donald Trump’s likely visit to one of the world’s most heavily armed border zones this weekend amid reviving optimism that the U.S. and North Korea may resume peace talks on denuclearization after their February talks in Hanoi ended with no agreement.

Dubbed “Mr. 5G,” Chairman Hwang urged world leaders to together pioneer the new 5G era as a distinguished speaker at the Global Entrepreneurship Summit (GES) 2019, which was co-hosted by the U.S. Department of State and the Kingdom of the Netherlands in The Hague from June 3 to 5. U.S. Secretary of State Pompeo and Prime Minister Rutte of the Netherlands were joined by 2,000 participants from around the world for this year’s GES at The Hague.

KT is the first provider in the world to offer unlimited data plans without a speed cap and a time period for its next-generation network services. 5G is up to 20 times faster than the current LTE or 4G networks, allowing super-fast and ultra-low latency services such as cloud-based streaming games, Augmented Reality (AR)/Virtual Reality (VR) and autonomous driving.

KT, formerly known as Korea Telecom, is racing to expand 5G coverage across the country, including the capital Seoul and its surrounding metropolitan area, six other metropolitan cities, most of all 85 major cities, 70 large shopping malls and discount stores and 464 college campuses. The company provides 5G coverage information to the public through a visualized map on its corporate website (https://coverage.kt.com), updated regularly by cities and districts.