Ofcom has announced how valuable airwaves will be released to meet the growing demand for mobile broadband, including new measures to safeguard competition.

People and businesses increasingly need reliable, high-speed mobile broadband to support devices such as smartphones and tablets. Ofcom is helping to meet this demand by releasing extra spectrum, allowing mobile operators to increase their networks’ capacity.

Later this year we will auction licences to use 190 MHz of spectrum in two ‘frequency bands’, increasing the airwaves available for mobile devices by almost one third.

40 MHz of spectrum will be auctioned in the 2.3GHz band . This band is already supported by mobile devices from manufacturers such as Apple and Samsung. These airwaves could be used immediately after release to provide extra capacity, meaning faster downloads and internet browsing for mobile users.

In addition, 150 MHz of spectrum will be auctioned in the 3.4GHz band . These airwaves are not compatible with most current mobile devices, but are expected to be usable by future phones and tablets. The 3.4GHz band has been identified as central to the rollout of 5G mobile across Europe.1

The auction rules are designed to reflect recent market developments and safeguard competition over the coming years.

When auctioning the spectrum, we will impose two different restrictions on bidders . These will limit the amount of spectrum operators can win in the 2.3GHz band; and place overall limits on the spectrum an operator can win across the 2.3GHz and 3.4GHz bands in aggregate.2

Taken together, the effect of the caps will be to reduce BT/EE’s overall share of mobile spectrum; the company can win a maximum 85 MHz of new spectrum in the 3.4GHz band.

The overall cap also means that Vodafone could gain a maximum 160 MHz of spectrum across both the 2.3GHz and 3.4GHz bands.

Based on today’s spectrum holdings, there will be no restriction on the amount of spectrum that any other bidder could win.

As we have previously said in our Strategic Review of Digital Communications, we will also look to include new obligations in future spectrum licences to ensure rural coverage

continues to improve, and are making further spectrum available for mobile in the 700MHz band in 2020.

This band is well suited for improving rural coverage and reaching deep inside buildings. It is currently used by Freeview TV and wireless microphones, and we will seek to place new coverage obligations on companies who win these licences at the next award.

We still intend to make the 3.6 to 3.8GHz band available for mobile as soon as possible, and will shortly publish our proposed approach.

We have also taken account of market developments that help the competitive position of some existing operators.

Operators have always held varying amounts of spectrum in the UK, more so than in many other European countries. However, the mobile market is still among the most competitive in Europe, and has been serving consumers well.5

Philip Marnick, Ofcom’s Spectrum Group Director, said: “Spectrum is a vital resource that fuels the UK’s economy. We’ve designed this auction to ensure that people and businesses continue to benefit from strong competition for mobile services.

“We want to see this spectrum in use as soon as possible. With smartphones and tablets using even more data, people need a choice of fast and reliable mobile networks. These new airwaves will support better services for mobile users, and allow operators to innovate and build for the future.” 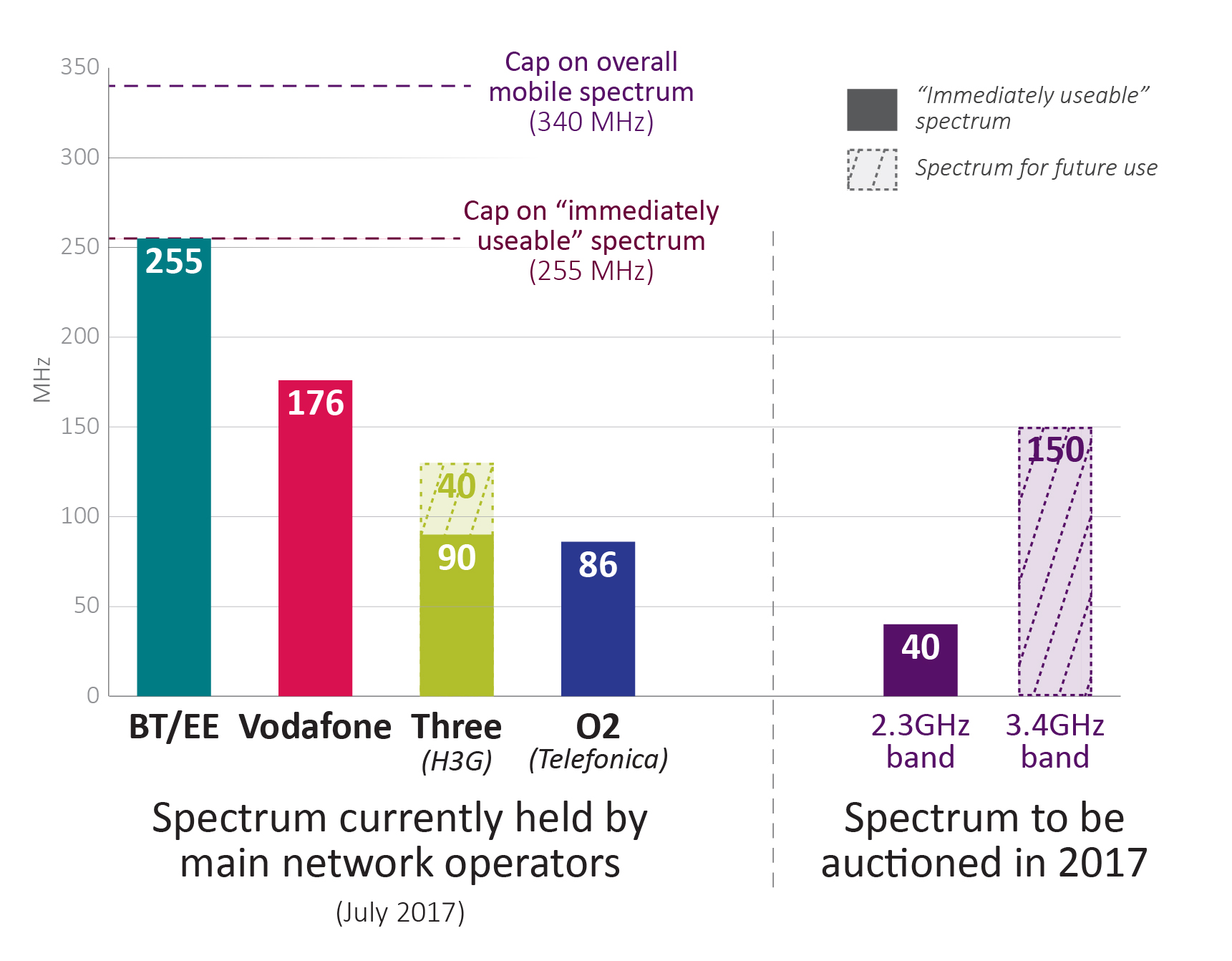