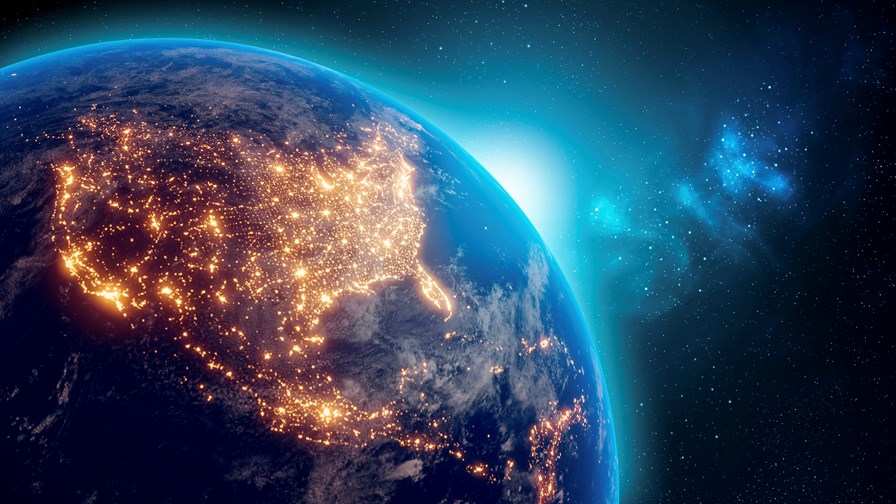 North American users are rapidly embracing 5G, which is expected to account for more mobile connections than 4G by 2025 and lay the groundwork for accelerated growth in the fixed wireless access (FWA) broadband and internet of things (IoT) services sectors over the next three years, according to a report from GSMA Intelligence, the research arm of the industry association.

In its Mobile Economy North America 2022 report, the GSMA Intelligence analyst team forecasts that 5G will overtake 4G as the most popular mobile access technology in the region and become the dominant mobile technology as soon as 2023. The study covers the US, Canada and the Caribbean countries, excluding Mexico.

By 2025, 5G connections (excluding IoT) will hit 280 million and account for 64% of all mobile connections in North America, up from 14% in 2021. By that time, the US is expected to have the second-highest 5G adoption rate in the world, surpassed only by South Korea, while Canada is expected to rank fourth behind Japan (see table, below). 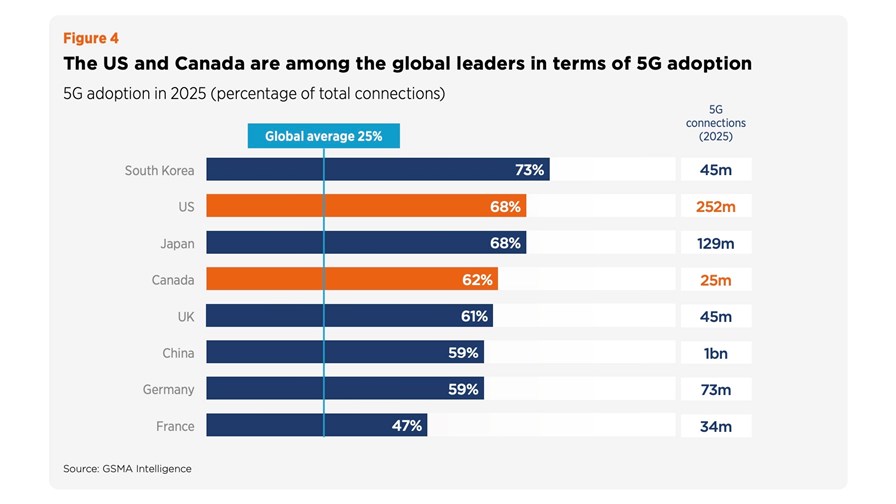 Top markets in terms of 5G adoption by 2025 - GSMA Intelligence

“5G will account for almost all mobile capex in the period to 2025 as operators step up deployments of mid-band spectrum, taking overall population coverage to 92% in Canada and 100% in the US by 2025”, noted the GSMA Intelligence report.

And while the US and Canada are expected to perform well in terms of 5G penetration, the technology is still a rather “medium-to-long-term prospect” across the Caribbean as operators are still focused on maximising the capacity of 4G.

The report also highlights it as a driving force behind FWA uptake, which is rendered “a more competitive solution” by 5G, given that it enables faster broadband speeds than 4G, and reduces the speed deficit more than fixed fibre and cable connections, while improving FWA network capacity. The report also suggests that most (if not all) of the main telcos in the US – including T-Mobile, Verizon and UScellular – are using 5G FWA to gain fixed broadband market share from cable providers. The GSMA stated that T-Mobile is currently the biggest single provider of 5G FWA services, with 984,000 FWA subscribers by the first quarter of 2022 and a goal of achieving 7 million to 8 million subscribers by 2025. By comparison, Verizon had a total of 433,000 customers in the home and business segments in the first quarter, and was aiming to have between 4 million and 5 million FWA subscribers by 2025.

The report went on to suggest that Canadian operators are also exploring opportunities in the 5G FWA field, especially in rural areas.

In terms of opportunities for telcos to gain traction by delivering services to businesses, the study suggested private 5G networks are “garnering significant attention as enterprise digitisation drives the need for secure, low-latency connectivity”. Examples given in the report include a partnership between AT&T and Microsoft to build a private 5G solution, Verizon’s private network On Site 5G, and Google Cloud’s launch of a portfolio of private wireless networking solutions – see What’s up with… Vodafone, Google Cloud, 5G growth.

Additionally, edge computing and network slicing capabilities offer growth opportunities, but the GSMA Intelligence analysts emphasised this is dependent on the wide adoption of 5G standalone (SA) systems, which have not been deployed as fast as many expected.

The report emphasised that spectrum availability is key for affordable 5G in the region and successful rollouts of the technology depend “heavily” on operators’ 5G spectrum holdings across all bands – low, mid and high – to deliver enhanced speed and geographical coverage.

“Additional spectrum can boost the provision of cost-efficient investment and enhance network quality in North America, which can become a central pillar of

Overall, mobile technology and services are estimated to have generated 4.2% of North America’s GDP in 2021, with the contribution amounting to $1tn of added economic value. On that note, 5G is forecast to bring notable gains, contributing $122bn to the GDP of the region in 2030.