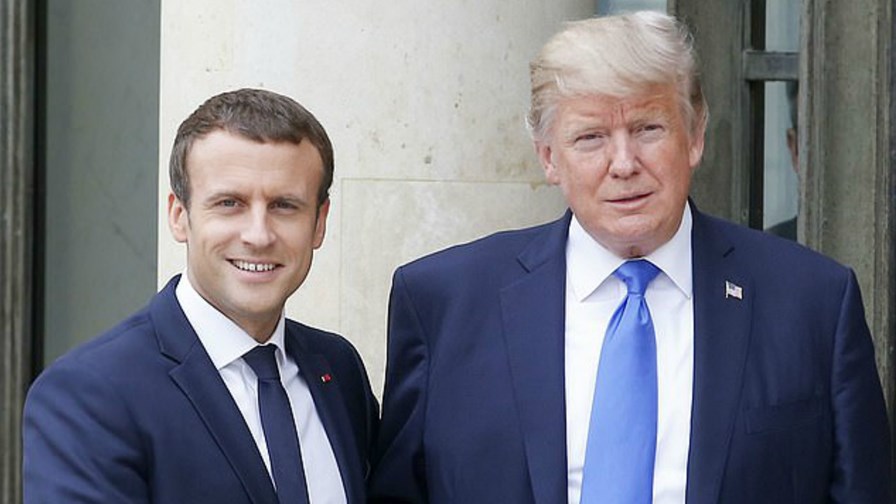 France’s President Macron has struck back against Trump’s threat to choke off US component supply to Huawei and thereby potentially throw a spanner in the works of much of Europe’s 5G roll-out (see - Trump tightens the screw on Huawei (and threatens European 5G viability). In an interview with Bloomberg, Macron indicated he wasn’t about to give in to the US bully-boy tactics - the first European leader to actually show some backbone since Trump’s announcement that he had authorised the US commerce department to prevent exports of US components if it threatened national security.

“Our perspective is not to block Huawei or any company,” Macron said at a technology conference in Paris. “France and Europe are pragmatic and realistic. We do believe in cooperation and multilateralism. At the same time, we are extremely careful about access to good technology and to preserve our national security and all the safety rules.”

France, Germany and the UK are all thought to be in favour of risk “mitigation” which would involve rigorous inspection and certification of all technology, not just Huawei’s, being introduced into their national networks. The UK is reportedly considering banning Huawei from the core network as well.

In fact much of the first round of 5G investment in Europe will involve so-called non standalone New Radio (NR), a roundabout way of saying that 5G NR spectrum bands and protocols will piggyback on the existing 4G access network and core via 5G enabled antennas.

Now the new threat from Trump is designed to make any supply agreement with Huawei highly problematic. According to Bloomberg, Huawei’s reliance on US technology is considerable. It currently spends about $11 billion a year on US components and 33 US companies are amongst its top 92 suppliers.

As we considered yesterday, the obvious response (apart from abject surrender to the bully - never a good idea) is to at least flex the possibility that work-arounds (with European government support) would enable infrastructure contracts to be completed and extra network equipment or componentry to be ordered and installed as required, maybe via European partners and Huawei entities established in Europe.

One clue as to how this might be part accomplished emerged today with the news that Huawei was planning to make extra investments in its Paris ‘OpenLab’, established in 2018. The Chinese vendor says it is poised to invest €35 million more on the installation which will  provide a platform for experts from different industries to identify their future needs in digital transformation, and to develop industry-specific solutions. In just one year, 50 partners worked on 15 industry solutions covering retail, manufacturing, and smart cities. Over the next five years, Huawei’s investment of 35 million Euros in its OpenLab in France will make it a stronger platform for cross-industry collaboration, it says.

Europe’s networks (plural - news reports in the UK annoyingly keep referring to a ‘UK network’ as if it were one monolithic construction - that, naturally, makes it appear more prone to catastrophic infection’ by a single bad actor) will certainly face ‘headwinds’ should the US end up fully applying its commerce department component ban. They must be seriously calculating whether they can hold onto Huawei as a supplier until there is either a change at the top in the US or Huawei meets China’s targets for technological independence in the mid 2020s.