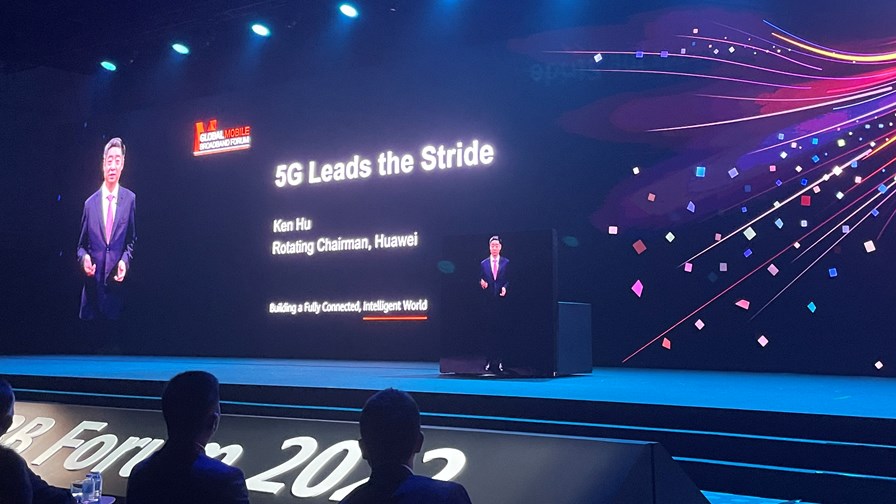 Huawei’s rotating chairman Ken Hu as a hologram, giving a keynote at MBBF 2022 in Bangkok, Thailand.

BANGKOK – Global Mobile Broadband Forum 2022 – Mobile operators need to collaborate more and come up with compelling innovations if they want to reap the financial benefits from their network investments, especially when it comes to grabbing opportunities in the enterprise field.

This was the main takeaway from this year’s Global Mobile Broadband Forum (MBBF), which was attended by senior executives from mobile operators and other ecosystem players from different parts of the world. Huawei’s global influence in telecom infrastructure might be waning, but it is still the single largest supplier of network technology globally and can still draw a crowd (though of course it generates a lot of its carrier unit business from China’s three main operators).

Huawei’s rotating chairman Ken Hu (pictured above), who appeared on stage as a hologram (an increasingly popular way to impress conference and meeting audiences), noted that 5G was already “in the fast lane”, with 230 commercial networks and more than 700 million subscribers globally within just three years of the first service launches.

While this is strong progress, Hu echoed many others in the telecom sector by noting that the industry needs to do more to unleash the full value of 5G, something he said would help generate economic activity and help the “struggling” world economy.

Hu was bullish that 5G can be “a key enabler for digital transformation” of businesses, though this is hardly something the industry hasn’t heard before. “5G’s wide coverage and faster speeds are perfect for scenarios like smart grids and smart transportation. In other domains like mining and manufacturing, companies can leverage 5G’s reliability and the fast uplink” for inspections and remote control, he added. All of this, he pointed out, can digitalise industries and “unlock new growth for carriers”.

China’s major operators generated US$500m in revenues from enterprise 5G connectivity services in 2021, according to Hu, and such services have, in turn, generated ten times that value from services beyond connectivity, such as data and integrated ICT services, though of course, such financial projections are tricky to qualify.

While there is much focus on the potential of 5G services in the enterprise market, there’s still plenty to be done in the consumer mass market sector too, noted Hu, even just from creating new “premium packages that guarantee speed and low latency”.

Huawei’s rotating chairman urged for collaboration on building out networks and optimising them for different types of user experiences, such as those based on video applications. Hu also pushed for the adoption of the next stage of the 5G evolution – which Huawei is calling 5.5G but is more widely known as 5G-Advanced – for innovations such as extended reality and cloud gaming.

“To keep pushing experience to the next level, we also need to push network capabilities to the next level. 5.5G is the path forward. Together with carriers and industry partners, we have proposed four features for 5.5G networks: 10Gbit/s downlink, 1Gbit/s uplink, support for 100 billion connections and native intelligence,” Hu stated.

Thomas Hundt, chief strategy and technology officer at Axiata Group, concurred with Hu’s appeal for industry collaboration, adding that this will help the telco group manage rising capital expenditure. “We believe that this capex tsunami that we have to continuously manage is very, very challenging for us to afford, but also the infrastructure and the assets that we have to put into play are eventually utilised better if we share, if we collaborate in the industry and partner,” he said.

The two largest mobile operators in Thailand, Advanced Info Service (AIS, which has about 44 million customers and a 46% market share) and True (which has about 32 million customers but is in the process of merging with dtac to form what would become the country’s largest operator) expect 5G uptake to grow in the south-east Asian country now that more affordable devices are generally available.

Only in the past month have entry-level 5G models from Samsung, Xiaomi and other brands hit the shelves in Thailand at prices below $200, noted Saran Phaloprakarn, head of the mobile and consumer products department at AIS Thailand. The operator has also implemented a subsidising strategy for 5G handsets, which has improved the ecosystem, he added.

Moving forward, AIS Thailand will focus on network slicing, as well as highlighting the high-speed and low-latency capabilities of 5G, but Phaloprakarn cautioned that such features will require a more advanced 5G ecosystem and the deployment of millimetre wave (mmWave) spectrum which, in turn, is only of use if handsets that support such frequencies are available.

“We hope that this year, or maybe next year, there will be mmWave devices and an ecosystem [that is] ready so that we can deploy the enhanced mobile broadband and unleash the potential of 5G,” he said, noting that the benefits of moving customers from 4G to 5G include faster and more reliable data connections, agile automation, and efficiencies.

These views were shared by AIS’s main rival in the market, True, with the company’s co-group chief commercial officer, Tanaphon Manavutiveth, also stressing the importance of a mature ecosystem. “The key success factor for us here in Thailand is that the ecosystem is ready” and there are many factors playing a role, such as cost efficiencies and support of regulators and the Thai government in general, he said.

Manavutiveth outlined the market as a leading adopter of 5G in the region of ASEAN (Association of Southeast Asian Nations). The technology’s uptake is at 9.2%, the second highest only behind Singapore, which has a penetration rate of 13.9%. He also noted that Thailand’s 5G subscriber base is expected to reach almost 10 million by the year end. Shipments of handsets capable of supporting the technology have been steadily growing from 5% last year to an expected 15% of total mobile devices shipped in 2022.

True’s Manavutiveth added that the company is eager to collaborate and work on 5G use cases: “We are looking to help expand 5G to grow as fast as we can.”