For Ericsson, its second quarter has been a mix of sweet and sour, with its worst fears realized in China.

In reporting its generally encouraging second quarter financials today, the Swedish vendor announced a monster 5G deal with Verizon worth $8.3 billion over five years, its biggest ever single contract: But that news was overshadowed by a dramatic sales slump in China and a very clear message from President and CEO Börje Ekholm that things are unlikely to improve in what is one of the vendor’s most important markets.

If it wasn’t apparent before, it’s very clear now that geopolitics is having a significant impact on the shape of the market and procurement decisions in multiple markets: So far this has mainly been restricted to a negative impact on Huawei and ZTE and their component suppliers, largely as a result of lobbying by multiple US administrations (but most fervently during the Trump era), but now it’s spreading, with Ericsson the latest casualty.

In reporting second quarter sales of SEK 54.9 billion ($6.34 billion) – down by 1% year-on-year but 8% better if currency exchange changes are stripped out – Ericson noted that this was despite a SEK2.5 billion ($289 million) slump in sales in Mainland China compared with the same quarter a year ago (a decline of 60%). (For Ericsson's full second quarter results announcement, see this press release.)

That’s a brutal drop, but one that had been a possibility ever since the Chinese authorities warned that Sweden’s decision to exclude Huawei from the Scandinavian country’s 5G network infrastructure market could spell bad news for Ericsson, which had cemented itself as the third main 5G gear vendor to China’s major network operators (behind local vendors Huawei and ZTE). Ekholm had warned previously of a potential backlash aimed at Ericsson when the current round of 5G tenders is finalized, but that tender process is still ongoing so the second quarter impact signals a reduction in spending by Chinese customers related to previously agreed deals, with Ericsson’s Networks and Digital Services divisions hit the hardest.

“We have previously communicated a high risk that we will be allocated lower market share in China due to Sweden's decision to not allow Chinese vendors in the Swedish 5G network, and this can lead to significantly lower market share going forward, compared to what we have today,” noted Ekholm during Friday morning’s earnings conference call.

He continued: “And when we look at the second quarter, we have seen that our sales in mainland China have fallen by about SEK2.5 billion, a 60% reduction compared to Q2 last year. We don't really know the definite outcome of the tenders that are ongoing, but we want to say that it's prudent to now plan for a significant reduction in market share, both in Networks as well as Digital Services. And regarding Digital Services, we can see that the material loss in market share in China in mainland China would lead to a delay in reaching the targets in Digital Services. We have, in addition, during this quarter we have taken a write off over SEK300 million [$34.6 million] related to pre-commercial product development for the Chinese market, and this is basically pushing out our ability to reach break even” in that division.

To hammer home the message, Ekholm, responding to a question about whether the slump in sales might be recovered later, noted that the revenues are “not coming back… we think it's prudent to plan for a significant reduction in market share [in China]… We know of the geopolitical tension with Sweden, we know what goes on there. We can speculate and we can have hypotheses, but the consequences are very clear in our sales volumes…  don’t assume it's coming back.”

The news prompted investors to drop Ericsson stock like a hot coal, and the vendor’s share price took an 8.2% hit in morning trading on the Stockholm exchange to SEK105.22

Ericsson China crisis overshadowed everything else, including the vendor’s massive 5G network infrastructure deal with Verizon, valued at $8.3 billion over five years and the “single largest deal in the history of Ericsson,” the company noted. The US operator, which has Samsung as its other main 5G radio access network supplier, will deploy Ericsson's 5G MIMO C-band, low-band and millimeter wave (mmWave) solutions: The vendor noted that its Massive MIMO, Ericsson Spectrum Sharing and Ericsson Cloud RAN systems “complement the high-performing Ericsson Radio System portfolio to support 5G services.” (See Samsung lands $6.6 billion 5G deal at Verizon.)

Fortunately for Ericsson there are some other positive signs too that give Ekholm and his team confidence that the vendor is “well positioned to take advantage of continued market momentum with our competitive 5G product portfolio and cost structure.”

For one, its gross margins are moving in the right direction and have been for the past two years, as the chart below shows. 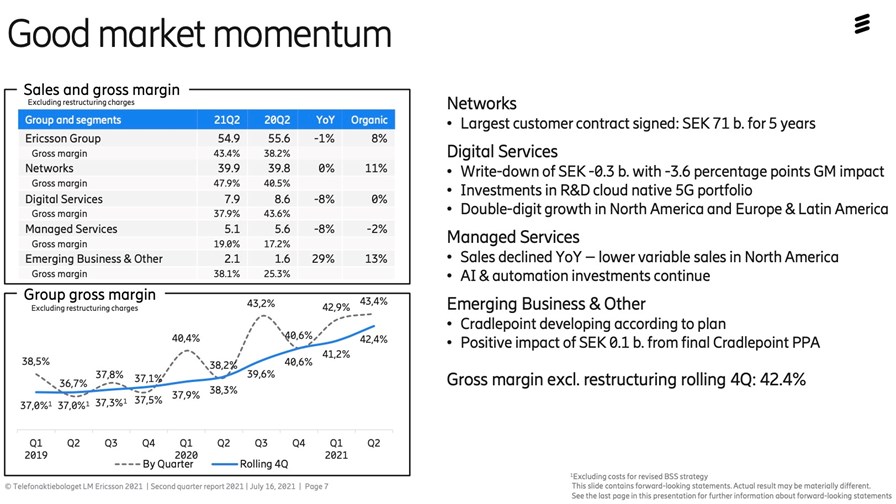 In addition, trusted market research house Dell’Oro has just updated its outlook for the global RAN market for this year, upping its year-on-year growth guidance from 3% to 10%, and while China accounts for a significant portion of that hike (the market there is set to grow by 12%), North America and Europe, with new projected annual RAN value growth of 12% and 9% (previous expectations, 2% and 3% respectively), will deliver additional business for Ericsson.

And, of course, the Swedish vendor is well embedded in many operator 5G plans, claiming to be playing a role in 93 of the 169 commercial 5G networks currently launched, and is positioning itself to play a bigger role in the enterprise wireless market as it develops and builds on its acquisition of Cradlepoint. (See Ericsson buys Cradlepoint in $1.1 billion deal.)

Ericsson has plenty of challenges on its hands – its IPR business has hit a few roadbumps recently too to add to the impact of the slump in China, and Open RAN continues to loom as a future potential thorn in its side, for example – but its geographic spread and 5G relationships, the increasing maturity of 5G and growing interest in related services and tech deployments by enterprises, plus the ongoing international retreat in the telecoms network infrastructure sector by one of its biggest historical rivals (Huawei), mean it has plenty of growth opportunities on which to focus.