BT lays out its next-gen network roadmap, with convergence and 5G at its heart 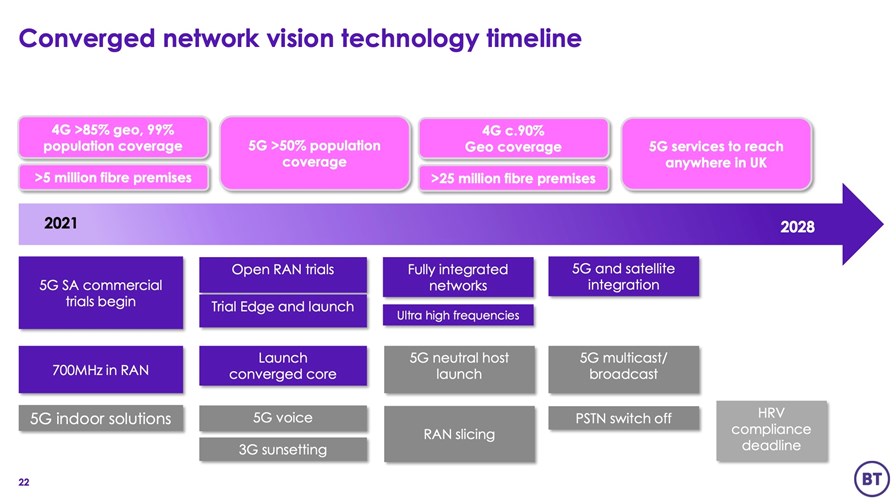 BT has laid out its network evolution plans for the coming decade with a roadmap that puts it on course to offer a 5G connection “anywhere” by 2028 and to have key parts of its infrastructure fully converged prior to that deadline.

Without saying as much in as many words, the plan looks like the final step in the BT/EE integration process (which began in 2016), bringing together the supporting platforms and operations so that the only divergence from a networking point of view is the final access medium (wireless, fixed).

BT’s timeline hinges on some strategic and enforced goals, namely: The migration to a 5G standalone architecture that will enable it to tap into the full potential of the next-generation mobile network (such as slicing); and the removal of equipment supplied by Huawei aka the ‘High Risk Vendor’ or 'HRV" by 2027 (see diagram above).

Those are the key drivers for BT, as laid out in a presentation given early Wednesday by CTO Howard Watson and BT Consumer CEO Marc Allera. A good part of the presentation was given over to how great BT’s current 5G network coverage and service is compared with its rivals, and industry analysts picked up on this as a reaction to Vodafone UK’s improving fortunes and heightened profile, and the threat of the Virgin Media/O2 combination. (See Virgin Media O2 launches with 5G, fibre pledges – now what?)

“A big network focus is understandable, particularly in light of good momentum from Vodafone,” noted CCS Insight’s Director of Consumer and Connectivity, Kester Mann, while Paolo Pescatore, founder at PP Foresight, notes that “BT is going on the charm offensive in the wake of O2 and Virgin Media coming together. For sure, 5G coverage will improve.”

If BT can meet its goal, it will be impressive: It is saying that a 5G connection will be available anywhere in the UK (which like any country has some very hard-to-reach places, especially in Wales and Scotland)” Most of the connections will be available from the operator’s macro network, but where that cannot reach, but is pledging to make 5G “on demand” using portable/roving base stations, drones and even (and this could be interesting) high-altitude platforms (HAPS). The BT team’s presentation did also include satellite in the list of options to provide broader 5G connectivity but, before anyone gets too excited, the role of the OneWeb satellite fleet (as per the MoU signed recently) will be to provide backhaul for 5G traffic.

The operator also outlined plans to switch off its 3G network by 2023 and the 2G network later this decade. “By sunsetting these networks, we reduce the complexity of our overall network, free up resources, and [allow us to] reuse valuable spectrum for 4G and 5G,” noted Watson.

The multiple faces of convergence

The advantages and efficiencies that BT should gain from these moves will be absolutely critical to its ability to compete at a service and economic level with its rivals and to deliver the services that any type of user (consumer, enterprise, government, wholesale) will demand.

The operator has long been working towards a single, converged transport infrastructure instead of a mish-mash of multiple optical and packet networks, with Ciena and Nokia playing important technology partnership roles. It’s not there yet “and it’s going to take a while,” but that single supporting transport network is on course to be in place within the next few years, says Tom Bennett, Director, Partnerships and Innovation, at BT.

And now it’s on the way to having a single converged core platform for subscriber data management, policy control, API management, service monitoring and more for all of its customers, fixed and mobile. That technology is coming from Ericsson, which landed the plum deal to provide its cloud native dual-mode core (managing 2G/3G/4G and 5G) in April last year: That core will run on BT’s Network Cloud platform, which is already highly distributed (more than 100 nodes), as BT’s chief network architect Neil McRae explained recently in an exclusive interview, in which he revealed also that Nokia and Oracle are also supplying some of BT’s next-gen core platform capabilities. (See Neil McRae on 5G and BT's Network Cloud.)

But it will be a while before that full convergence becomes a reality: BT’s presentation cited the “mid 2020s” for this goal, but that could mean anything up to 2027: Bennett says that BT is absolutely committed to the convergence plan for the transport and intelligent core systems, but that there are a lot of steps still to be taken and it could be towards the end of the stated timeframe before the full benefits are gained.

That puts BT some way behind its previous target, according to Pescatore, who (with a memory bank of which many of us would be proud) notes that “during the consumer update back in May 2018, Allera presented a vision of a ‘smart’ converged network to be completed by 2022. This has now been pushed back to mid 2020s.”

In the meantime, BT is working towards a full 5G Standalone deployment (New Radio access and core), with commercial trials with customers, alongside edge computing trials, starting this year, with commercial deployment during the next few years, when services such as dedicated network slices and drone highways will be enabled, and services such as cloud gaming, live AR/VR and autonomous private network applications enhanced by lower latency (sub 20ms).

And while other operators, particularly BT’s larger European peers, voice their enthusiasm for Open RAN as part of the near-term 5G plans, the UK national operator is holding fire on that pront as it focuses on other priorities, explained Watson. (See BT’s CTO: Huawei swap-out first, Open RAN later.)

What will this mean for BT’s flexibility/time-to-market, operating costs and sustainability goals, metrics that are becoming increasingly important?

BT says its goal is to keep its opex flat whilst densifying network and expanding coverage, and to “increase its energy efficiency over time” (a more vague response is hard to imagine). As for enhancing its ability to onboard and offer new services more quickly by having a next-gen core, the operator says the “cloud native standalone network with a dedicated slice for new services trials can be set up in days and migrated to commercial service in weeks, with IT integrations being the long lead time deliverables.”

Overall, the plan is “evidence of joined-up thinking across its businesses,” notes CCS Insight’s Director of Network Infrastructure Richard Webb. “It establishes some aggressive targets for fundamentals such as network coverage on both the mobile and fixed-line network, as well as a roadmap towards yet-to-be-defined service areas. The 5G Standalone roll-out is also exciting as this gets to the more advanced capabilities of the network from which new user experiences can be created — it will potentially be a platform for things such as virtual reality/augmented reality services as just one example.”

He also highlighted the important role of “the ‘3 As’ of automation, AI and analytics, plus machine learning and edge computing, and software-defined cloud networking” in enabling BT’s future services portfolio.

For Webb, ultimately, this “shows something of BT’s strategy for its own transformation into an enhanced connectivity, IT and digital services provider through the 2020s.”

And in six or seven years’ time, we’ll find out if it has been enough.