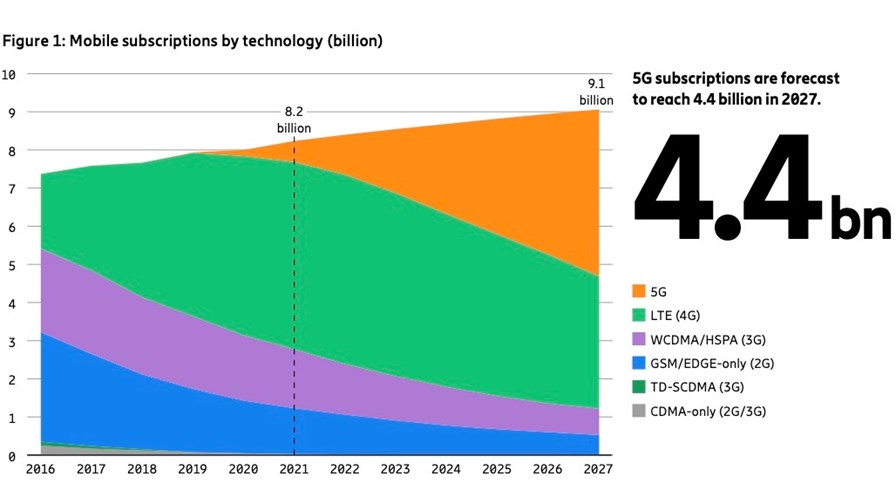 With almost a quarter of the world’s population already reached by 5G coverage, the number of 5G subscriptions is rising fast, hitting 620 million at the end of the first quarter this year and on course to pass 1 billion by the end of 2022, according to statistics and forecasts included in the latest Mobility Report published by Ericsson.

Looking further into the future, the research team expects the number of global 5G subscriptions to reach about 4.4 billion by the end of 2027, when the total number of mobile connections worldwide is set to hit 9.1 billion (see graphic above).

And as the total number of connections grow, 4G and 5G connectivity dominates the mobile landscape, and people increasingly use their smartphones for an increasing portion their data connectivity needs, so mobile data volumes are increasing at a dramatic rate, driven mainly by the viewing of video content. According to the Ericsson team, total mobile network data traffic (including fixed wireless access connections) doubled between Q1 2020 and Q1 2022, when it hit 93 exabytes-per-month. That number is set to hit a staggering 368 exabytes-per-month by 2027 as data-hungry applications such as the uptake of virtual, augmented and mixed reality applications starts to have an impact towards the end of the forecast period.

That’s because the number of operators using FWA as part of their broadband service strategies is growing significantly. Of the 311 operators around the world surveyed in April this year by the Ericsson team, 238 had a FWA offering, up from 135 in August 2019. And a growing number of these are using their 5G networks to offer FWA services: “During the last 6 months, the number of service providers offering 5G FWA services has increased from 57 to 75,” notes the research team in the report.

As a result, the number of FWA subscribers globally is forecast to reach 106 million by the end of this year (almost all still 4G connections), up from 58 million in 2019, and reach 226 million by 2027, by which time nearly half of all FWA connections running over licensed cellular networks will be 5G.

The report also includes a broad range of statistics and forecasts related to IoT and VoLTE connections, and forecasts that the number of 5G standalone (SA) networks is set to double this year from the “more than 20” that had been launched by the end of 2021. You can download the report here.