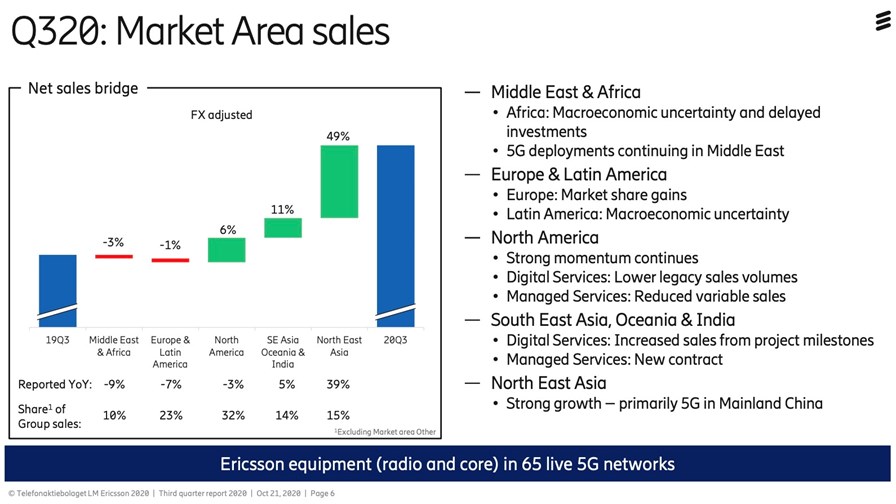 Ericsson reported revenues of SEK 57.5 billion ($6.58 billion), up by 1% compared to the reported sales a year ago but up by 7% when adjusted for “comparable units” and currency fluctuations. Gross margins improved to 43.1% from 37.7%, while the vendor recorded an operating profit of SEK 8.6 billion ($984 million) compared with a loss a year ago.

It also claims “leadership” in the 5G market, with 113 commercial deals and its technology installed in 65 live 5G networks, and growing market share in the mobile networks market, most of which, claims the company’s CEO Börje Ekholm, “come from non-Chinese competitors” (which suggests Nokia). “We're not winning due to geopolitical situation. It's all about winning in front of the customer and delivering the best portfolio and cost competitive portfolio,” he boasted during the vendor’s webcast earnings presentation on Wednesday morning.

Investors liked the news: The company’s share price shot up by almost 8% to a five-year high of SEK 106.20 on the Stockholm exchange.

The increase in revenues was driven “mainly” by 5G sales for the Networks division in China but also by “high activity levels” in North America. And, as Ericsson had expected, the 5G business in China has now reached the stage and the volume level where it is profitable and will continue to be so in the fourth quarter, noted Ekholm.

That 5G business in China helped drive a 49% year-on-year increase in sales (adjusted for currency exchange rates) in the North East Asia region (see the chart above) and a 13% “organic” increase in Network division revenues.

But it was notable, only a day after Chinese vendors Huawei and ZTE were excluded from Sweden’s 5G market on security grounds, how the CEO began his webcast with diplomatic praise for China, its economy and its digital ecosystem.

“It’s very important for us, strategically important for us to be in China, and that's because it's a global powerhouse for innovation and technological change, and driven by many great entrepreneurs,” stated Ekholm.

He added that while it’s true that China has “massive scale…  I think the entrepreneurial spirit we see there is a key driver of China’s success in the world. 5G is being built out very fast in China, with good coverage. 4G drove the consumer app economy, and China, the US and the Nordics were the first countries to roll out 4G. And that allowed entrepreneurs in those regions actually to innovate on top of the network, building what has become the app economy. So it's no surprise that we see the consumer quality consumer app economy today dominated by Chinese and American companies. Now we're seeing the same thing on 5G. So building out 5G will allow Chinese entrepreneurs, as well as Americans… to innovate in this new space.”

The CEO also, as he did three months ago, urged Europe to pull its finger out.

“It’s important for the rest of the world, and notably Europe, to take some impressions from the fast build out pace we're seeing in China. And this will lead to new companies being developed by entrepreneurs and innovators – for [Ericsson] to be part of seeing the emergence of that ecosystem, and realising what that will drive for feature requirements in the future, will be critical. We see [in the next] five years a huge opportunity for more open and global innovation, and it's built on this requirement of a high-performance, secure wireless network infrastructure – the value of running applications on top of the 5G network will be significantly higher… 4G was a consumer drive, and 5G will now be the backbone for digitalising enterprises.”

He added: “The strategy that the Chinese operators are deploying is to build out the network because it’s a platform for innovation, and it's a platform for driving the rest of the economy – in Europe we tend to focus more on the investments in 5G, but the reality is that the value of the applications you're going to run on top of 5G is much higher. The Chinese operators recognise that, and the Chinese system is recognising that… driving more investments to build out a network infrastructure. We see almost the opposite in Europe.”

So is Ekholm worried that China might counter the Swedish authorities’ decision to ban Chinese vendors from 5G rollouts by limiting Ericsson’s role in China? He responded to such a question from an investment analyst during the webcast, but once again was diplomatic in his response.

“We see good demand in China, we have no reason to think it will not continue…  Countries have to decide on the geopolitical situation, on national security, on their own and that's something we let them do. We focus instead on what we really can impact…  the competitiveness of our portfolio, providing our customers with the right features and right product. The reality is we thrive in a situation where there is competition – competition drives out the best from us. We will be more innovative, provide better solutions to customers. So I welcome that we have global competition.”

There’s no doubt, though, that Ericsson will be keeping an eye on China’s Export Control Law that will come into effect on 1 December and which could impact companies doing business in China or with Chinese companies.

It’s not all about China, though… The Ericsson CEO is also pumped about Ericsson’s prospects in the enterprise sector, both in terms of developing products for service providers and also to sell direct to business users.

Ekholm sees this part of the vendor’s business being developed both organically and though acquisitions, with the purchase of indoor/private network wireless technology specialist Cradlepoint – announced last month for $1.1 billion and set to close in the next couple of weeks – as a prime example of how new business opportunities can be developed. (See Ericsson buys Cradlepoint in $1.1 billion deal.)

While Ericsson will “continue to work with our service provider customers, we're also going to be in the material business for enterprise use cases… we will look for standalone opportunities” that will drive extra traffic onto telcos’ networks as well as offer direct business opportunities for the vendor.

It’s fair to say that Ekholm has his eyes on further similar acquisitions that could boost Ericsson’s role in the enterprise networking market.