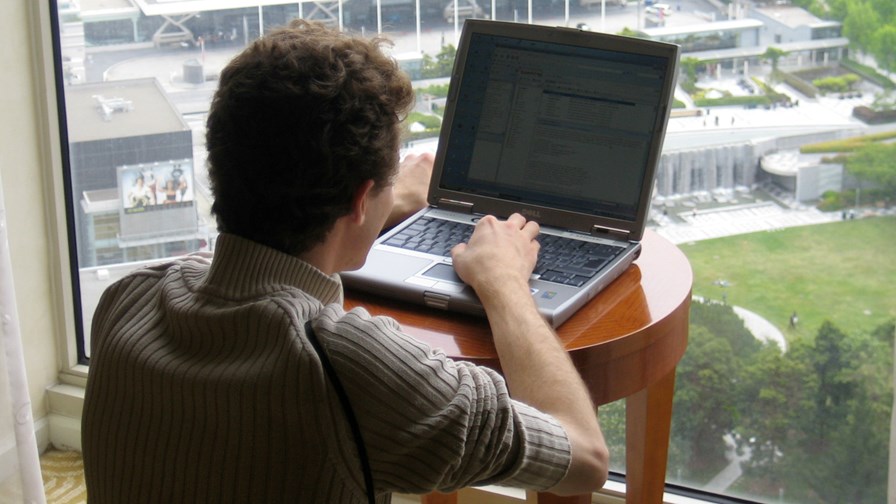 Grabbing some free WiFi from a hotel room, via Flickr © tiseb (CC BY 2.0)

The US regulator, the Federal Communications Commission (FCC), has fined Marriot hotels $600,000 for blocking personal hotspots and making guests pay through the nose for slow and old fashioned in-house Wi-Fi.

It's a derisory penalty that Marriot will make back straight away by doing something as simple as ceasing to provide cotton buds in hotel bathrooms or reducing the number of olives in an expensive bowl of nibbles at the bar. After all, American Airlines once memorably saved $400,000 in a year by eliminating just one olive from every salad it served, so there is a precedent. However, it's not the monetary fine that has Marriot smarting, it's the attendant, and fully deserved, bad publicity.

Some years ago I wrote a series of articles on the impact the Internet and other new comms technologies were having on the hotel industry and I interviewed a lot of senior hotel staff during the process. It was then that I found out that, universally, the biggest bone of contention at check-out time came when departing guests saw their "extras" bill and then complained about being ripped-off on call charges.

It was by far and away the biggest source of customer complaints and noisy and bad-tempered scenes at the front desk. It didn't look good and check-out staff and management were given a broad remit to reduce disputed call charges on the spot and without reference further up the supervisory chain. One moan, one fist banged down on the counter, and the bill would be cut - but even then the hotel still made massive profits on the residual call charges made by, what were at that time, a captive clientele.

All that changed with the advent of mobile phones. Who now would ever use a still massively overpriced hotel phone except to call room service or the concierge? With the arrival of mobile technology one long-lived and over-milked hotel cash cow dried up immediately and for good. Then came the wired Internet. People wanted, indeed frequently needed, to be on-line and US and UK hotel chains in particular were quick to exploit a new way to gouge guests on extras and incidentals by providing, often very slow and iffy, Internet access at vastly inflated prices. Once again the hotels had a captive customer base and once again most people grudging paid the extortionate prices demanded at least once - but then many voted with their feet and wallets and went to competitor hotels that provided free Internet services.

And then Wi-Fi arrived and, to much rejoicing, the use of hotel-provided cabled Internet access fell off a cliff and splattered nastily and unmourned across the bottom-line rocks. So, what do many big hotels chains do now? They make it as difficult as possible for guests to use their own WiFi devices and hot spots by using blocking technology and other underhand methods to force people into using their expensive home-grown alternative.

In this particular case the FCC says the Marriott chain admitted to using a jamming technology in "at least one" of its hotels (any wagers on there being more than just that one establishment? No, I thought not) to prevent guests from accessing the Internet via mobile broadband.

Q. What's a "rogue wireless hotspot"? A. One that denies Marriot the chance to gouge Wi-Fi prices, of course

In its written judgement the regulator writes that "Marriott employees" [at the amusingly named Gaylord Opryland in Nashville, Tennessee] "used containment features of a Wi-Fi monitoring system to prevent individuals from connecting to the Internet via their own personal Wi-Fi networks, while at the same time charging consumers, small businesses and exhibitors as much as $1,000 PER DEVICE to access Marriott's Wi-Fi network. Some might regard that as a lowbrow way to make high profits."

The judgement continues, "In some cases, employees sent de-authentication packets to the targeted access points, which would dissociate consumers' devices from their own Wi-Fi hot-spot access points and, thus, disrupt consumers' current Wi-Fi transmissions and prevent future transmissions." In other words, what actually happened was the the hotel deliberately disconnected users from their laptops, tablets and mobile handsets.

This, the FCC points out is in breach of Section 333 of the Communications Act and Travis LeBlanc, the chief enforcement officer at the FCC said, "It is unacceptable for any hotel intentionally to disable personal hotspots while also charging consumers and small businesses high fees to use the hotel’s own Wi-Fi network".

The FCC is not amused and the Marriot chain, in addition to paying what is a pettifogging fine will, henceforth and for the next three years, have to file mandatory quarterly compliance reports with the FCC confirming and proving that its dodgy practices have ceased and that it is obeying the regulator's judgement.

However, despite acceding to this demand and accepting the fine, brass-necked Marriot insists that its policy and actions were legal and designed only to tackle the insidious menace of "rogue wireless hotspots."

In a rebuttal statement the hotel chain writes, "Marriott has a strong interest in ensuring that when our guests use our Wi-Fi service, they will be protected from rogue wireless hot spots that can cause degraded service, insidious cyber-attacks and identity theft. Like many other institutions and companies in a wide variety of industries, including hospitals and universities, the Gaylord Opryland protected its Wi-Fi network by using FCC-authorised equipment provided by well-known, reputable manufacturers. We will continue to encourage the FCC to pursue a rule-making in order to eliminate the ongoing confusion resulting from today's action and to assess the merits of its underlying policy." Yeah, right. Why pay the fine and accept the other strictures then?

Sex first, then a knife fight

While US Federal law does proscribe individuals from using devices that interfere with cellular, GPS and other wireless networks, that provision does not apply in the Gaylord Opry case, as FCC Enforcement Bureau Chief LeBlanc made explicit.

He told the Marriot chain, "It is unacceptable for any hotel to intentionally disable personal hot spots while also charging consumers and small businesses high fees to use the hotel's own Wi-Fi network. This practice puts consumers in the untenable position of either paying twice for the same service or forgoing Internet access altogether. Consumers who purchase cellular data plans should be able to use them without fear that their personal Internet connection will be blocked by their hotel or conference centre. Period." So, now the Marriot must cease and desist from blocking WiFi in and at the properties it either owns or manages - or else.

As frequent business travellers will be only too aware, it is the premium hotel chains that routinely overcharge on "extras and incidentals" (a $10 small bottle of a water anyone, or perhaps a Milky Way coming in at a mere $8?). Gouging is a way of life at these establishments where the justification seems to be that the majority of 'guests' are on expenses accounts anyway, so they don't care what anything costs. Well, yes they do actually. They resent being taken for mugs when other, cheaper hotels belonging to the same companies provide free Wifi as a matter of course. And the answer, of course, is not to use hotels that charge for wi-fi access. Plenty don't so give them your custom instead.

The reality is that what Marriot has been doing is exactly analogous to another hotel nearby preventing guests who have already paid for a room at the Marriot from entering the hotel, then forcing them across the road at gunpoint to the new hotel and compelling the customer to pay for a room there. It's rotten and Marriot has been rumbled. Let us hope that any other hotel chains that have been indulging in the same shameless chicanery get the message and stop ripping-off Wi-Fi users immediately. Mind you, they'll then just hide the cost elsewhere in the bill on some other "incidental extra" like the provision of a bed or a door on the room.

By the way, while sourcing material for this article I cam a cross a report by health inspectors in New York whose unenviable task it was to examine and assess hotel rooms in the light of the recent bed bugs scandal in the city. The conclusion did make me laugh. It said, "Our investigations showed that given the amount of organic matter and bodily fluids so liberally spread around (even in fumigated and 'cleaned' rooms)  and liberally splashed or daubed on furniture, doorways, working surfaces, drapes, towels, TVs, crockery and light switches the only conclusion we can draw is that, on arrival at an hotel, the majority of US guests first have sex and then graduate to a knife fight."