Enterprise WLAN market sees best growth in over a year 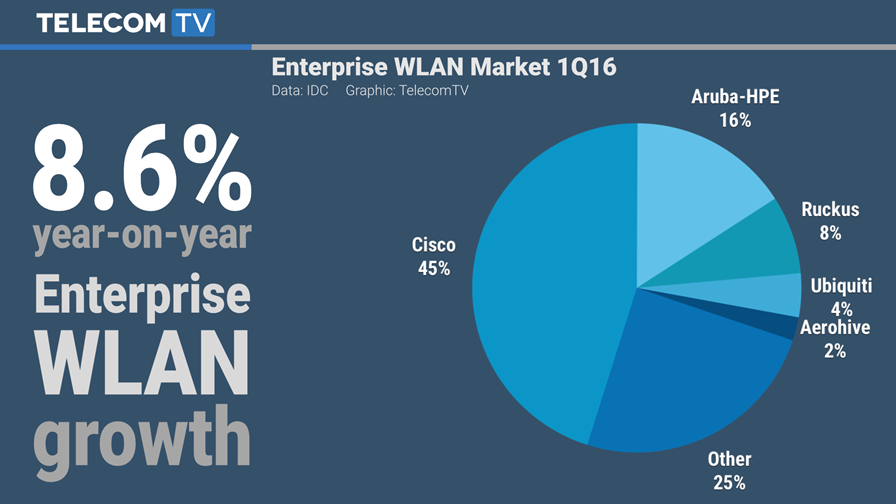 The combined consumer and enterprise worldwide wireless local area network (WLAN) market segments increased 4.5 per cent year-on-year in the first quarter of 2016, although it declined 10.7 per cent on a sequential basis. According to a new report from IDC, the enterprise segment grew 8.6 per cent year-on-year in Q1, experiencing its best growth in more than a year – mainly due to refresh cycles, easing of economic concerns, greater availability of Wave 2 802.11ac products, and continued fulfilment of e-rate contracts in the US education market.

The enterprise WLAN market once again saw its strongest growth rates in the Asia Pacific (excluding Japan) region, which saw 19.7 per cent year-on-year growth in Q1. The North America region saw a 14.0 per cent increase, although the Middle East and Africa region grew just 4.5 per cent and Western Europe increased by only 2.7 per cent in the same period. Still, that was better than Central and Eastern Europe and Japan, which declined 8.8 per cent and 9.2 per cent respectively, and Latin America declined by a huge 15.6 per cent.

Meanwhile, consumer WLAN market revenue was flat on a year-on-year basis in Q1, with the adoption of the 802.11ac standard in the consumer market has been significantly slower than in the enterprise segment and accounts for just 18.4 per cent of shipments and 46.1 per cent of revenue in the consumer category.