Reality dawns: enterprises will be the drivers of the mobile AR market 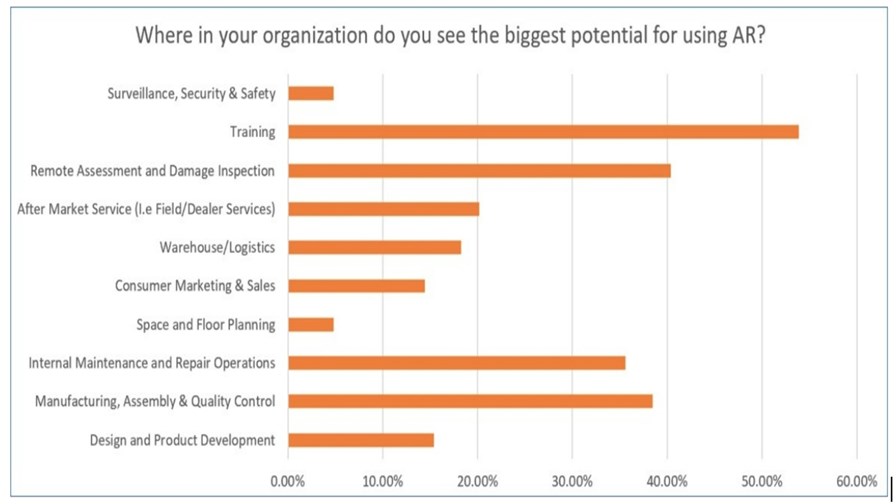 Telcos are being led to expect a lot from Augmented Reality (AR) which, we’re told, will drive a wave of ‘immersive content’ which, in turn, will gobble up all the extra capacity unleashed by 5G networks.

Ericsson is particularly bullish about AR prospects. In a recent ConsumerLab report it  outlined the results of a consumer survey into what consumers expected to happen in the next five years or so.

Half the respondents said that they expected AR glasses not only to be mainstream, but well on the way to ousting the smartphone. A significant third didn’t think AR glasses would be mainstream within the next 5 years, but Ericsson also produced a AR/VR expert - Johan Hagegård - who predicted that the smartphone “would be dead in five years' time,” which seems somewhat unlikely: "I will instead have smart glasses in front of me all the time," he said.

Verizon is one telco which would like to have its users donning smart glasses and helmets, all the better to consume what it’s calling XR content  - extended reality - when out and about (see - Verizon plans to harness 5G and ‘extended reality’ to its media business).

Verizon intends to apply new augmented reality (AR) and extended reality (XR) content via 5G when it arrives. Very much a consumer play, it sees XR essentially taking a big part of the consumer upgrade case for 5G.

It’s already preparing the media path by collaborating with Reuters and TIME to produce ‘immersive news experiences’. It says AR/XR will be used to ‘amplify’ news stories. And of course there will be lots more amplification available to advertisers and their agencies for immersive’ sales messages. Personally I’ll be looking forward to seeing what David Attenborough’s descendent (he can’t live forever) can do with Extended Reality on nature programmes.

AR is already playing on 4G networks, but full fat XR (which incorporates aspects of virtual reality, augmented reality and mixed reality) will use so much bandwidth and require much better latency so it’s expected to require 5G to become anything like a mainstream, mass market mobile application.

So the question is: how quickly can XR become ‘mainstream’ enough to support commercial mass market content?

Granted that within 5 years we may sight increasing numbers of smart glasses wearers, but if the experience of Google Glass is anything to go by there is a lot of work to do before the world throws away its smartphones to rely on a glasses interface instead.

Commercial applications, however, are a completely different story.

Here there are real signs of a significant and, more importantly for 5G, a ‘mobile first’ commercial wave brewing up.

One of the leading AR vendors is Atheer, which in Sept/Oct last year conducted a global Enterprise AR Readiness Survey.

Atheer claims that, among enterprise respondents (with 1,000+ employees), the majority (53 per cent) said that they were "testing or implementing with limited and/or local scope" while a further 13 per cent were at the stage of having "enterprise-wide AR solutions under deployment/in operation".

The kicker was that a majority expected widespread AR adoption within the next three years. 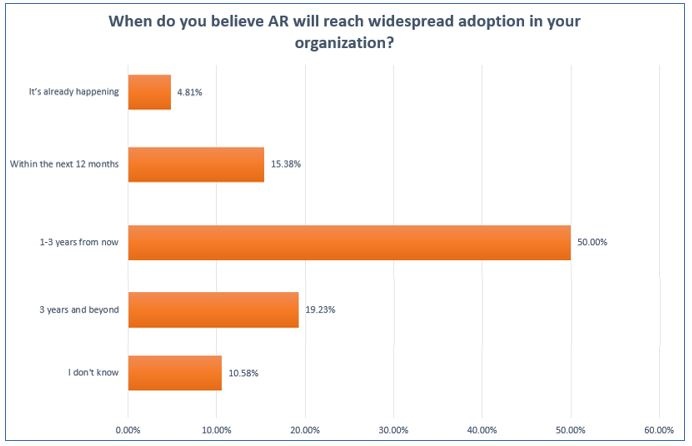 Where will AR play within the enterprise? Respondents identified training, remote assessment and inspection, manufacturing, assembly and quality - as well as internal maintenance and repair operations.

In terms of what it’s going to be used for (see main diagram above), education and training seems to be the main direction for commercial AR

This finding is reinforced in a report published by ABI Research. It says AR and VR educational content will continue to expand in the coming years and by 2023 the total value of AR in education will be approximately US$5.3 billion. At the same time, total revenues from VR Head Mounted Displays (HMDs) used in education are expected to grow beyond US$640 million.

“AR and VR educational applications shift the learning process from passive to active, allowing students to interact with content and practice their knowledge in real-time conditions,” says Eleftheria Kouri, Research Analyst at ABI Research.  “Mobile device-based solutions are a cost-efficient option due to the existing large installed base, although fully immersive experiences aren’t possible. Head-mounted experiences provide the most immersive experience possible but also can be challenging when it comes to price and implementation. “

ABI says Average Selling Prices (ASPs) for AR glasses are expected to significantly decrease in the next few years, reaching US$733 for monocular and US$347 for binocular by 2023. Virtual Reality device costs are better though, with standalone headsets trending down toward US$200 ASP by 2023 and mobile-based VR housings far less. Ease of setup and use with standalone devices make it a favorite for educational purposes.

As with PC penetration 30 years ago, the education and training market is the obvious entry point for technologies (and their vendors) which expect to set and retain market advantage in the years and decades to come.