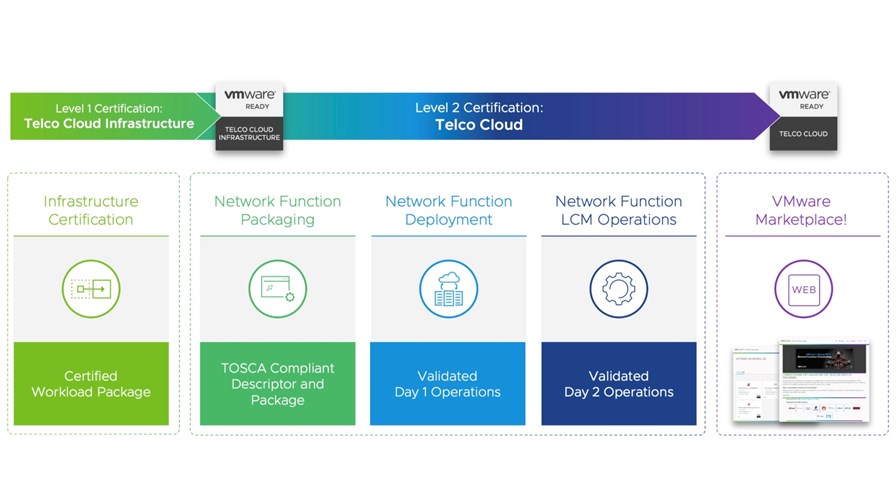 As part of its efforts to ease the process of adding new functions to telco networks, VMware has expanded its telco cloud readiness program to include support for cloud native functions (CNFs) and a new process that deals with multi-cloud automation and orchestration, moves the company believes will enable its operator customers to build their 5G core systems more quickly.

The company, which counts the likes of AT&T, CenturyLink, Deutsche Telekom, KDDI, NTT, Swisscom, Telefónica,Telstra, T-Mobile (Sprint) and Vodafone (among others) as customers, has already tested and certified virtual network functions (VNFs) from more than 35 vendors as being suitable to run on its Telco Cloud Platform, which provides virtual compute, storage, networking, management and operations capabilities for operators’ virtualized network services.

Now it’s updating the name of its original certification process and expanding the program.

The process previously known as Ready for NFV will now be called VMware Ready for Telco Cloud Infrastructure: This identifies which third party functions, from developers such as Enea, NetNumber and Nokia, can run on VMware’s Telco Cloud Platform.

That is 'Level 1' as shown in the diagram above.

The new process, Level 2, is called VMware Ready for Telco Cloud, which ensures that network functions are compatible with VMware’s Telco Cloud Automation, a multi-cloud orchestration and automation platform. In this instance, VMware works with the third party network functions developers to create an “ETSI-compliant descriptor as well as a workflow, resource and commissioning artifact for a validated and tested Cloud Service Archive (CSAR).” Developers need to have completed the VMware Ready for Telco Cloud Infrastructure certification process to engage in this particular process.

In the official announcement about the expanded program, Gabriele Di Piazza, VP of solutions, Telco & Edge Cloud, at VMware noted: “As the telecommunications industry starts its migration to 5G and cloud native telco cloud design principles, there are two trends that will shape the industry for years to come – a need for improved orchestration and a shift of network functions to a cloud native architecture… The expanded scope of the VMware Ready for Telco Cloud program reflects VMware’s understanding of these shifts, and our focus on helping customers more seamlessly architect, deploy, and manage software-defined telco clouds.”

While VMware has clearly moved to ensure it can support compliance testing for cloud native functions (CNFs) with this revamp, Di Piazza noted during a recent conversation with TelecomTV that it’s still very early days for cloud native telco action.

“The transition from virtualized functions to cloud native has a lot of implications… as applications are disaggregated into microservices, for the first time in many years there’s a need for the complete re-architecting of applications – it’s not a case of ‘I had a VNF [virtual network function] and now I have a CNF [cloud native function] and the problem is solved.’  That has massive implications on operational aspects – you need to look at a different deployment model if you look at the CI/CD model or Platform-as-a-Service (PaaS) approach – and it’s a transformation across the supply chain… it includes a huge human factor, from a skills perspective,” noted the VMware man.

There’s little doubt that VMware’s program will help network functions developers accelerate their potential deployment with operators, but the process still limits that reach to VMware’s customer base, and those developers still have to go through similar processes with other telco cloud platform suppliers or directly with operators to be considered for deployment: That’s long been a frustration amongst developers and doesn’t look like it will evaporate until true cloud native functions have been developed that should, in theory, be easily onboarded onto any cloud platform, whether private or public.