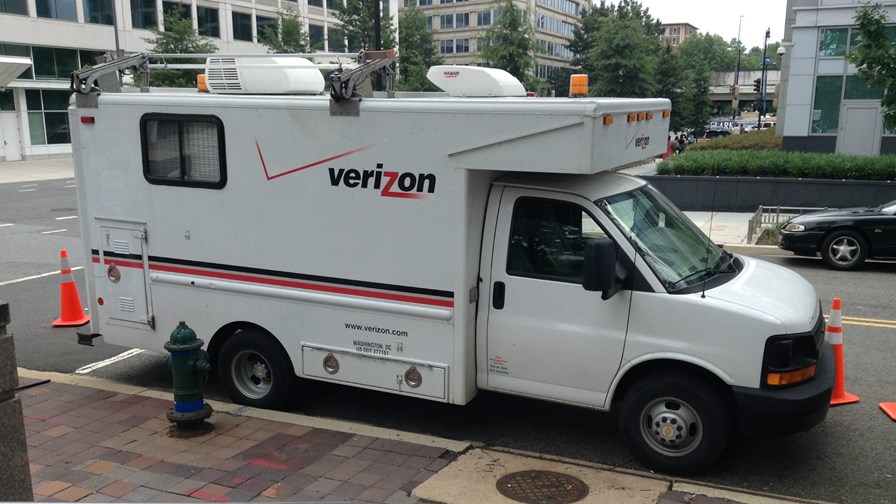 Do you remember the old MCI ad: "Is this a great time, or what?" Well, that depends on the way you look at it. Verizon might like to see itself as cock-of-the walk and king-of-the-hill right now as it moves to sell its enterprise assets for somewhere not un-adjacent to US$10 billion, but as the greater part of the US telecoms market drifts inexorably back to de facto duopoly, quasi-monopoly status subscribers and consumers faced with increasingly less choice and rising prices probably think that it's not that great a time at all.

Verizon made a rather half-hearted, (and, some might say, a half-arsed) attempt to become a serious player in the burgeoning cloud computing and data centre markets but it was a failure and so now the company's PR spin-doctors are letting it be known that it's full ahead back to the future by focusing on the core business of wireless mobile services.

Thus strong rumours have it that Verizon will rid itself of it's data centre business, Terremark, and is considering also finally cutting the cord to landline by disposing of what's left of MCI. In February this year Verizon sold some of its residential landline portfolio to Frontier Communications for $10.54 billion and it also dumped its comms towers business for $5.4 billion.

It is interesting to note that earlier on this year the Monroe, Louisiana, local exchange carrier and ISP, CenturyLink, (which acquired fellow operator Qwest back in 2011) was negotiating to buy at least some of Verizon's landline assets but the talks foundered on disagreement over price. Then, just last week, and adding a yet another twist to the madly-tangled convolutions of the US comms market, CenturyLink, attempted the difficult trick of changing strategies in mid-stream (as it were) and announced that it is now selling some of its data centres.

Meanwhile, it is well known that AT&T has been trying to data centre assets for some time now and in October the enterprise comms provider Windstream Holdings of Little Rock, Arkansas, sold its data centre arm to the cloud computing and co-location corporation TierPoint for $575 million.

Oh, what a tangled web they weave

It's a full-time, and very entertaining, job for a journalist trying to keep up with the endless machinations of US comms companies as they thrash about trying to stay one step ahead of the competition, but customers must be baffled by the endless machinations and concerned about what it will mean to them and their pocketbooks as the obsessive chess game goes on and on and on.

The rumours about Verizon's intentions vis-a-vis its wireline portfolio is leaving have some analysts scratching their heads because Verizon needs wireline backhaul to keeps its mobile services, (literally) on the air. So, if it sells what it already has it'll have to buy some more from someone else somewhere else anyway. Strange or what?

Furthermore, and in addition to the regulatory hurdle any such changes would have to clear, Verizon is in deep with a large number of US Federal Government clients (including the Department of Defense) and they would be very wary of asset sales. Meanwhile, the assets themselves are massively entangled and it would take considerable time and be very expensive to tease one out from the other to be readied for sale.

Nonetheless, such difficulties can be overcome and, in the short- to medium-term  nothing seems likely to inhibit those whirling in and out of the Consolidation Polka.

On October 20th, when Verizon posted its Q3 numbers, the company's CFO, Fran Shammo, (with some considerable surprise if his mug shot on Verizon's website is anything to go by - I do urge you to take a look, have a laugh and speculate just where the goose might be) reported that the global enterprise division, which posted a 4.9 per cent decline in revenue, continues "to work through secular and economic challenges."

It is not known whether or not he was wearing the robes, regalia and accoutrements of a cardinal at the time but then "no one expects the Spanish Inquisition", at an American earnings call, do they?

The After Show: Live

The After Show: Live

The Power of Partnership at the WAN Edge with Verizon