NEW DELHI, May 7th, 2018 : India networking market which include Ethernet switch, Routers and WLAN segments witnessed a 5.2% YoY growth in Q42017 with increased investments across the enterprise and service provider deployments.

According to IDC’s latest Asia/Pacific Quarterly Ethernet Switch Tracker, the Q4 2017 Ethernet Switch market in India stood at USD 118.7 million (By vendor revenue) with a de growth of 9.5% Y-o-Y due to reduced spending across organizations. The enterprise deployments showed an upward trend from previous quarter although it was an Y-o-Y decline. The top five verticals in Q4 2017 are professional services, banking, telecom, government and education. Various digital initiatives by the government would trigger additional investments in the coming quarters. 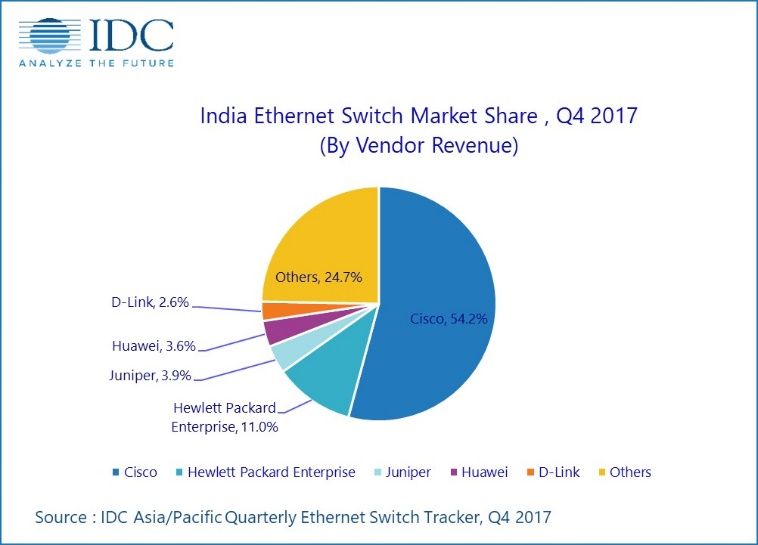 Cisco’s retained its top position in the Ethernet Switch market at 54.2% in Q4 2017. This was followed by HPE and Juniper both of which posted a healthy double-digit Y-o-Y growth. Nokia and Arista continue to witness a very strong Y-o-Y growth.

The Router market in India in Q4 2017 stood at USD 98. 7 million (By vendor revenue). The enterprise and the service provider deployments, observed a healthy growth in Q4 2017 over the last quarter. The Service provider segments remained competitive with continued investments in 4G deployments and VoLTE and the regular refreshes to upgrade the network infrastructure. The government initiative to provide internet to the rural areas will also be a driving force for this segment. 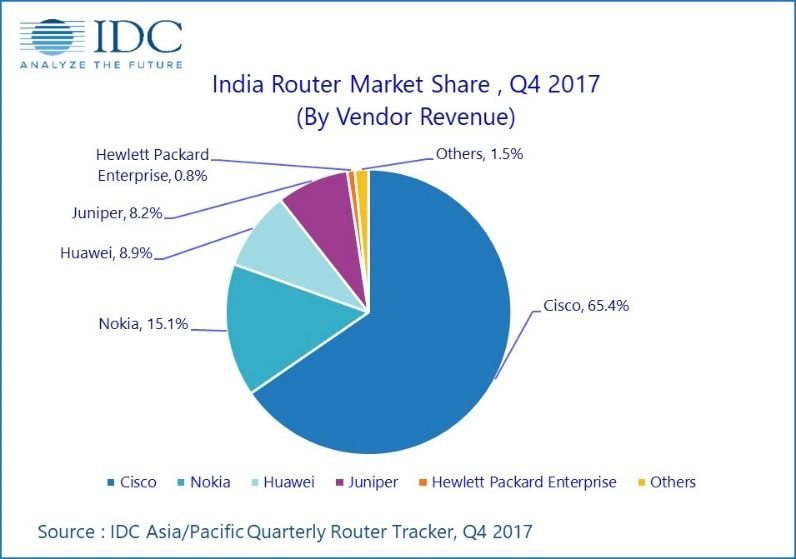 Cisco continues to lead the router market with 65.4% share in Q4 2017, followed by Nokia which posted an extremely good growth to take up the number two spot among the vendors.

According to IDC’s latest Asia/Pacific Quarterly WLAN Tracker, the WLAN market in India stood at USD 42.1 million (by vendor revenue) in Q4 2017 and a Y-o-Y decline of 8.9% The Q4 2017 market observed a decline across the deployment categories after the seasonal spike in Q3 2017. In the enterprise deployments, government, education, professional services remained the top verticals. Going forward the various smart city initiatives by the government to deploy Wi-Fi solutions will have a positive impact on the WLAN market. 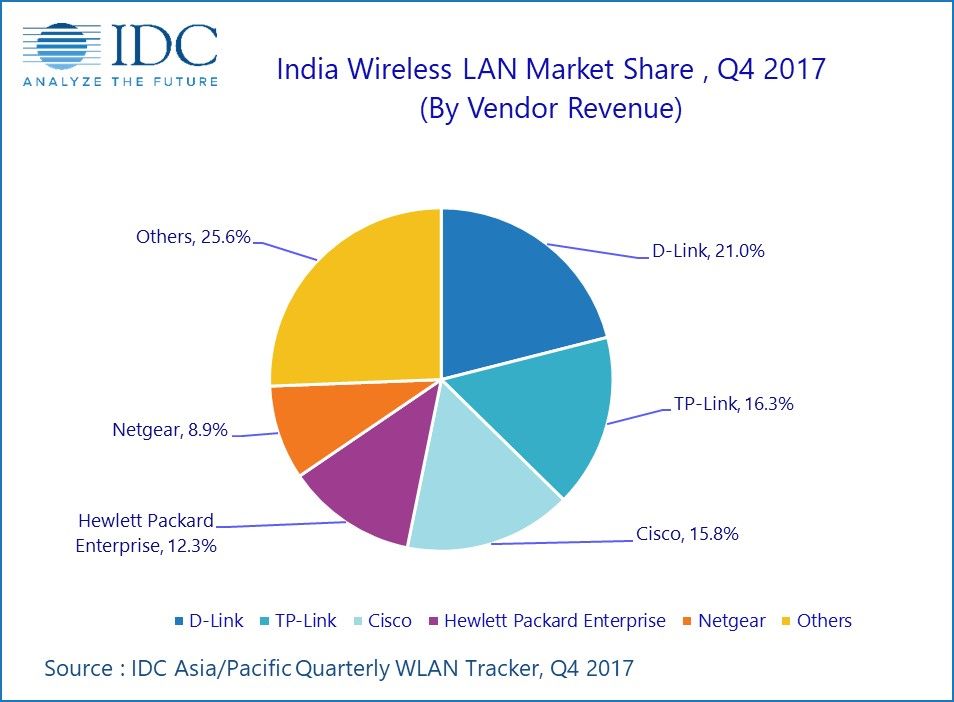 D-Link continues to be the leader in Q4 2017 in the WLAN market with a 21.0% market share followed by TP-link and Cisco.

“Adoption of SD-WAN is slowly gaining traction and expect this technology to be an integral part of the enterprise network strategy across organizations. Benefits such as optimization of application traffic and reduction in network operational cost by offloading traffic from MPLS to cheaper internet medium are pushing organizations to consider SD-WAN deployments.”

”Network infrastructure is the backbone in this digital world. The advent of new age technologies such as mobility, cloud, IOT, etc. along with various digital transformation initiatives in organizations would lead to relooking of network architecture to be more efficient, flexible, smart, scalable and secure.”

The Ethernet Switch, Router and WLAN market are expected to grow in single digits in terms of compound annual growth rate (CAGR) for 2017–2022. Government initiatives is expected to propel the growth across the product category specially in the coming year