At the Bronx Latin School in New York City, teacher Katrina Roman says the topic of ancient history doesn’t usually set students abuzz. But this week, they took a field trip to ancient Aztec ruins using Google Expeditions, a virtual reality teaching tool built with Google Cardboard. Normally, their assignment would involve poring over photocopied photographs, but instead, they stood at the top of Chichen Itza, then examined detailed carvings at Tenochtitlan. Amid “oohs” and “aahhs,” the students shouted out details they noticed and shot hands up to answer Ms. Roman’s questions. 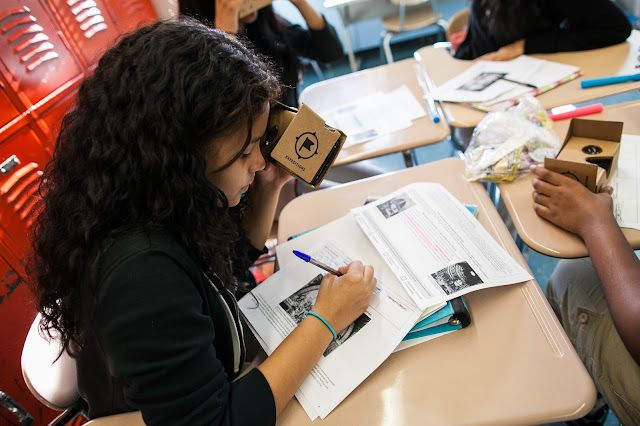 Katrina Roman’s class at theBronx Latin Schoolfills out their assignment after visiting Aztec ruins with Expeditions. The class is part of a history and geography pilot withNew Visions for Public Schools.

Starting today, we’re bringing this experience to thousands of schools around the world with the new Expeditions Pioneer Program. During the 2015/2016 school year, we’ll be bringing “kits” containing everything a teacher needs to run a virtual trip for their class: ASUS smartphones, a tablet for the teacher to direct the tour, a router that allows Expeditions to run without an Internet connection, and Google Cardboard viewers or Mattel View-Masters that turn phones into virtual reality headsets. Although nothing replaces hopping on the bus for a field trip, there are some places that are just out of reach (hello, Chichen Itza!). Virtual reality gives teachers a tool to take students places a school bus can't.

To help teachers learn how to use Expeditions, we’ll be visiting thousands of schools around the world and bringing the kit for teachers to use in their classes for the day. Up first: Australia, Brazil, New Zealand, the U.K. and the U.S., followed by more locations as the school year progresses. At each school, our team will show teachers how Expeditions works and help set it up before class.

Right now, teachers can choose from a library of 100+ virtual trips to places like Mars, the Great Barrier Reef and the Great Wall of China. But we’re constantly adding more trips with the help of partners like PBS, educational publisher Houghton Mifflin Harcourt, British documentarian David Attenborough and his production company Alchemy VR, and the Wildlife Conservation Society. We’re also working with the Starfish Foundation to help students explore future careers by showing them a virtual day in the life of professionals including a veterinarian and computer scientist. And to help students achieve those career goals, we’re working with First Lady Michelle Obama to support her Reach Higher initiative by taking students on virtual college tours. 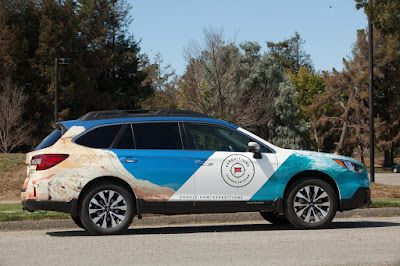 And if you see one of these cars on the road, that's us! The folks at Subaru, who invest in education as part of their Love Promise initiative, have created a fleet of Expedition Pioneer Program rides that we'll be using to bring kits to schools.

If visiting Mars, trekking on the Great Wall of China or exploring what it’s like to work at a veterinarian’s office sounds like something your class would be interested in, head to the Expeditions Pioneer Program site and sign up.