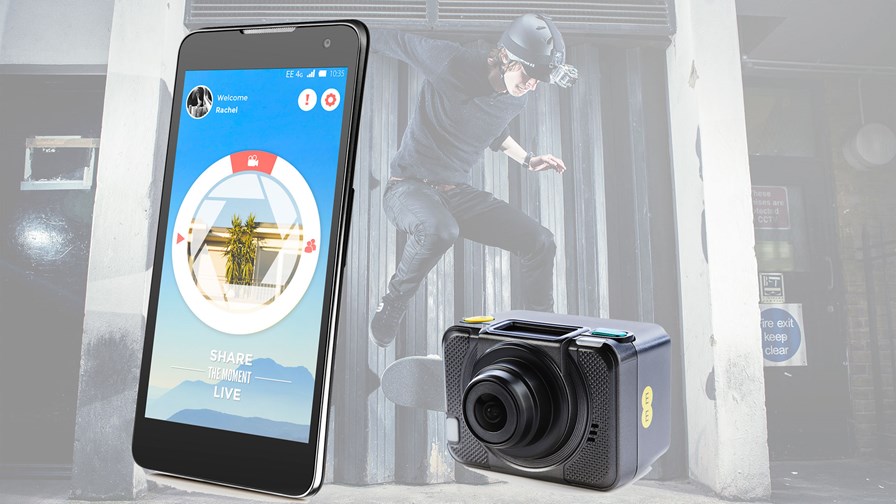 It's time to grind your board and get stoked, as EE shows off its urban creds. Or put another way, EE wants all you adventure sports fanatics to ditch your GoPro cameras and buy its own connected device instead.

In the first of a series of planned connected device releases, UK mobile operator EE has unveiled its 4GEE Action Cam, a 4G-enabled HD video camera that has more than a passing resemblance to the popular GoPro range. It also comes with an accompanying (rather chunky) watch, which acts as viewfinder and remote control.

“Over the past two years we’ve witnessed how 4G connectivity has changed behaviour and instilled a desire to connect and communicate instantaneously when out and about,” said Olaf Swantee, CEO of EE. “We’ve introduced our ‘connected strategy’ as we understand our customers not only want superfast coverage, they want products that give them the very best experiences, coupled with the most innovative and exciting ways in which to share them.”

EE obviously wants to load up its network (no sign of a spectrum crunch here) whilst at the same time encouraging higher ARPU spend from its customers. It’s tapping into the predominantly youth-orientated culture of “instant gratification”, believing that rather than film our action videos and then spend time editing them later before uploading to YouTube, we would rather broadcast them live and as they happen. And they are probably onto something with this line of thinking, given the sudden and dramatic rise in popularity of Periscope live streaming.

True, we can use teathered devices to bring network connectivity to WiFi or Bluetooth devices, or use a mobile hotspot box, but it’s not easy and who wants to spend time messing around with all the settings and workarounds required to get it working? Far easier if there was an all-in-one device.

The cost of instant gratification

The 4GEE Action Cam can record full HD video (1080p), although only 720p for 4G broadcast (hey, this is 4G, not 5G…) and 13MP photographs. It will also shoot slow motion, but only at SD resolution. It has a three hour battery and 64GB of external memory. EE is using the Skeegle streaming service, which enables up to 10 minutes of live recording. Skeegle can live streaming, or it can replay your videos, and you can add circles of friends with which to share your videos.

But going live comes at a price. Existing EE customers get it free, all others will have to pay £50 up front. Pay monthly customers will be charged either £15 per month for 2GB of monthly usage, or £20 for 10GB. If you would rather use Pay as you Go, then the camera will cost you a rather more expensive £300, which includes 2GB of monthly data, or £400 if you want 24GB of data.

If my calculations are correct (and please let me know if you disagree), a 10 minute 720p video, which is the maximum that Skeegle will allow at any one time, will consume about 75MB of data to upload and stream. So, your basic 2GB tariff should be sufficient for about 25 full-length streams.

The 4GEE Action Cam is the first in a range of 4G ‘connected’ devices planned from EE in 2015. Its new “Connected Strategy” is to target four growth categories: connected home, connected car, connected business and connected you – in other words it wants to power the connected society.