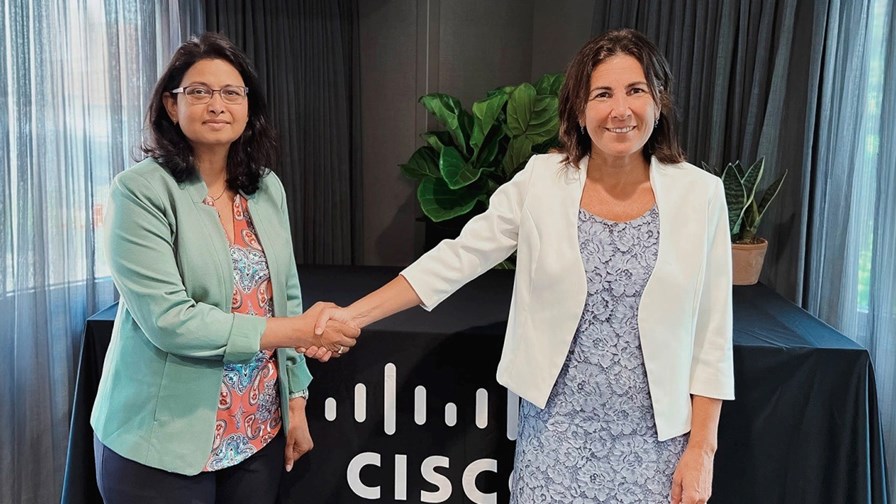 Shailaja Shankar, Senior Vice President and General Manager at Cisco Security Business Group (on the left), and María Jesús Almazor, CEO of Cybersecurity and Cloud at Telefónica Tech (on the right side)

In today’s industry roundup: Telefónica and Cisco to begin offering a new managed service to connect enterprises and employees located anywhere; KDDI and Mitsui & Co. create a new company to develop smart city innovations; and Veon agrees to sell its operation in Georgia.

Telefónica and Cisco have joined forces to deliver a service that promises a seamless and secure way to connect enterprises across datacentres, branch offices and remote employee locations. The Spanish operator’s digital arm, Telefónica Tech, and the US tech giant will target businesses of any size with the new managed service, which will include software-defined (SD)-WAN, security and secure access service edge (SASE) architectures. In a statement, Telefónica explained that the novel offering will blend a mixture of Cisco SD-WAN solutions, Cisco Meraki cloud-based wireless and Cisco Umbrella security solutions, to bring about cloud security functionalities, which aim to ease and protect the experience of employees when they connect online or use business applications regardless of their location. The new service will be introduced within Telefónica’s flexSITE platform, which it created with Aruba Networks, a subsidiary of Hewlett Packard Enterprise, in 2020. Initially, the offering will be available to businesses in Spain, before widening availability to other markets in Europe and Latin America. “We seek to meet the current needs of our customers, facilitating from the same solution any connectivity and security challenges they may face in the era of hybrid work”, commented Rames Sarwat, director of cybersecurity and cloud products and services at Telefónica Tech. You can find out more about the offering here.

In partnership with Mitsui & Co, an industry development specialist, Japanese operator KDDI has launched a company called Geotra, which will focus on the development of smart cities. This is a step towards achieving the government-led vision Society 5.0, which targets the digital transformation of Japan. The new company aims to deliver a platform that will use artificial intelligence (AI) and location data from people’s smartphones to analyse and visualise geospacial data, “especially personal activity” such as “the means, time and purpose of movements”. Geotra has already partnered with property developer Mitsubishi Estate Corporation to examine business planning, assess transport needs and realise Mobility as a Service (MaaS) in the Marunouchi area in Tokyo. Another operator focused on accelerating the transition to Society 5.0, SoftBank, recently unveiled plans to raise up to ¥35bn (approximately $283m) to tackle social issues in the country through 5G adoption. (See SoftBank targets $283 million to help social issues in Japan through 5G.)

Digital operator Veon, which has mobile network operations across Asia, Europe and Africa, has announced it is to sell its business in Georgia to its former local partner for $45m. The unit will be owned by Georgian businessman Khvicha Makatsaria, according to a previous filing to the country’s regulator, the Georgian National Communications Commission. In its statement, Veon said the move was in line with its “long-held ambition to simplify the Group’s structure”. Commenting on the sale, the company’s CEO, Kaan Terzioglu, described it as “another step towards streamlining our group operations”, adding that the subsidiary’s management and new shareholder will continue to develop “the success of the company”. In the first quarter of 2022, Georgia was one of the smallest contributors to the group’s performance, accounting for $10m in revenue for the period, considerably lower than some of its other operations, such as in Russia at $857m and Pakistan at $338m. Veon also announced the sale of its Armenian unit in 2020, and is in the process of trading its stake in Djezzy Algeria.

The US National Security Agency (NSA), the Cybersecurity and Infrastructure Security Agency (CISA), and the Federal Bureau of Investigation (FBI) have issued a joint Cybersecurity Advisory document that “describes the ways in which People’s Republic of China (PRC) state-sponsored cyber actors continue to exploit publicly known vulnerabilities in order to establish a broad network of compromised infrastructure”. The advisory details “the targeting and compromise of major telecommunications companies and network service providers and the top vulnerabilities – primarily common vulnerabilities and exposures (CVEs) – associated with network devices routinely exploited by the cyber actors since 2020.” The document identifies specific devices from the likes of Cisco, D-Link, Fortinet, Netgear, Zyxel and others that have been targeted by hackers. Read more.

AI-enabled in-building connectivity tech specialist Plume has added three big names to its board: Magdalena Yesil, founding board member of Salesforce; Roxanne Oulman, former executive vice president and CFO at Medallia; and Tony Werner, former CTO at Comcast. “I couldn’t be more excited and honoured to welcome Magdalena, Roxanne and Tony to Plume,” said Fahri Diner, founder and CEO of the company. “They each bring unique skill sets, professional networks and valuable perspectives to help propel us to new heights,” he added. Plume has grown quickly over the past couple of years and now powers more than 40 million active residential and small business locations with its cloud-hosted services through more than 275 communication service providers (CSPs) across the Americas, Europe and Japan. The company raised $300m last October to take its total funding to $697m, giving it a valuation of $2.6bn. Read more.

Neutral host network operator Cellnex and telecoms giant Nokia are strengthening their existing relationship in the private wireless networking market, in which Cellnex has been active since it acquired Finnish specialist Edzcom in 2020. Nokia is one of the leading technology providers in the still nascent private wireless networks market, claiming to have provided the technology for almost 500 deployments in total. “Cellnex and Nokia have a strong and trusted partnership,” stated Mikko Uusitalo, general manager of mission critical and private networks at Cellnex. “Nokia has a leadership position in terms of winning deals, which has enabled customers to adopt private wireless networks. At Cellnex we have many years of experience in designing, building and operating customised private network solutions. Leveraging the business resources of both companies will allow us to boost industry 4.0 growth,” he added. Cellnex, though, is yet to provide details on exactly how the partners are working more closely together or how many private network engagements they have already worked on together.