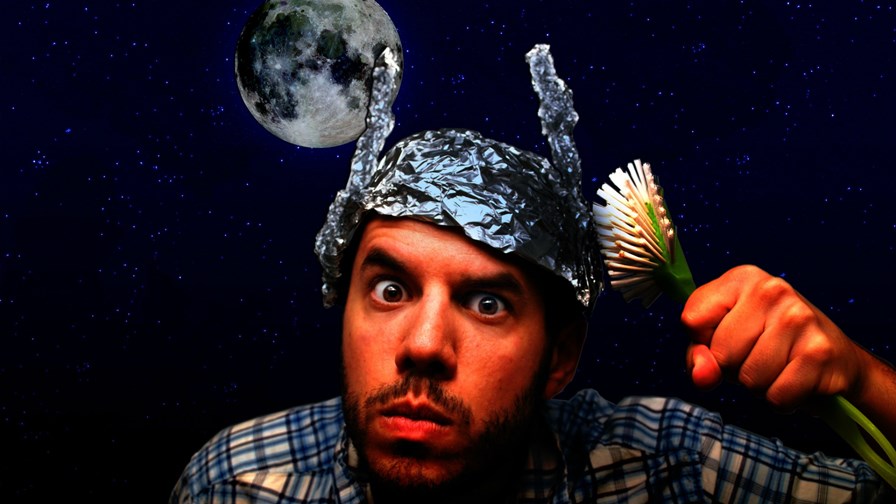 If you have tears (of laughter) to shed, prepare to shed them now. Over several decades of being exposed to over-egged marketing hype chuffed, puffed and wuffled out by overpaid PR agency personnel with names such as Pan, Prospero, Pippin and Prudence, I thought I'd read it all and seen it all - but I was wrong. Yesterday I came across the most egregious example of flatulent advertising copy that I have ever seen, and believe you me, that's saying something.

Open your eyes, hearts and bowels then as you learn about the 5GBioShield, a 128MB USB stick priced at £339.60 each. The device is a common-or-garden USB stick of very limited capacity and of a kind that were churned out in their countless billions by Chinese factories and cost pennies to produce. Perhaps it should be borne in mind that although the age of the 128MB USB stick passed into history at about the time of the Relief of Mafeking there are obviously quite a few left in stock and being sold at a knock-down price.

Ah, but then the 5G BioShield circuit board is so very special because, as its florid supporting verbiage would have us believe, it protects people and premises from the ravages caused by exposure to "electronic fog" in general and 5G signals in particular.

So, what do you get for your money when you spend hundreds of pounds on a USB device that would cost a couple of quid at the most if you bought the equivalent at your local corner shop or from an online retailer? Well. it comes in a purple, faux-plush, draw-string bag which features a silver logo of the head of a lion on it. So far, so impressive. Then there's the part of the device that you use to stick the shiny metal business end into a relevant socket on a laptop computer. This is transparent plastic and also features a silver lion logo. The metal end comes fully equipped with a stick-on plastic circle.

Oh yes, I almost forgot, there's also a light-emitting diode. Important that - apparently. I say, "apparently" because there is actually no need to plug the device into anything at all because it is 'always on' and requires no power of any sort to function - but it might be nice to sit in your protective bubble in your lead-lined cellar with your tin-foil hat set at a rakish angle and lit by the soothing and reassuring glow of a single LED.

When the 5GBioShield is slipped out of it's purple plush package and is placed next to a smartphone, a laptop, a tablet, a wi-fi router, a DECT phone, a small brown loaf or even a lobster for that matter, "through a process of quantum oscillation" a colourless, odourless and tasteless and utterly invisible bubble of “holographic catalyzer technology” magically springs into existence to protect anyone and anything within eight metres of nano-operating diametre of the device by balancing and re-harmonising disturbing frequencies. Much as a performing sea lion does when it takes a memorised nip at an array of pilchard-flavoured horns tuned to play "Colonel Bogey".

For those worrying about your family, a la Dominic Cummings, you can extend your zone of protection to 40 metres if you go large and spend big on three 5GBioShields at the special bargain price of just £958.80.

According to the ineffable blurb on the 5GBioShield website the device also "restores the coherence of the geometry of the atoms, which allows a perfect induction for life forces, by (re-) creating a cardiac coherence, via plasmic support and interactivity. It emits a large number of life force frequencies favouring a general revitalisation of the body, adjusting them according to the absorption capacity of each respective individual." They tried it first on sponges so they know it works.

However, punters loony enough to actually buy one of these things may not experience an immediate amelioration in what ails them as "the time needed for the effects to manifest themselves will depend on the sensitivity of the user, as well as the degree of repair each biological organisme [sic] requires.

"Some users immediately feel the effects, in the form of calm, harmony and serenity. Other users, more physically impaired, will have to wait several days or even weeks for the body’s revitalisation mechanisms to be fully effective. Therefore, patience and perseverance are recommended to everyone."

Yeah. I'll bet. There'll also be a generalised feeling of there being something of a hole or a vacuum in the area where the wallet used to be.

The BBC has reported that records at Companies House in London show that the BioShield Distribution company is the sole provider (in this dimension anyway) of the 5GBioShield has two directors, Anna Grochowalska and Valerio Laghezza.

They say their company neither manufactures the devices nor owns the truly astonishing IP that makes them so incredible - in the literal sense of the word. Thus one must assume that they are delivered directly from Narnia by leprechauns on centaurs, the unicorns being fully occupied in Silicon Valley at present.

It seems the aforementioned directors used to be part of "Immortalis" a company selling "Klotho Formula" a dietary supplement "that leads to relativistic time dilation and biological quantum entanglement at the DNA level". A bit like Weetabix then.

The 5GBioShield website informs us that the device is, and I quote, "resulting from research of several decades in multiple countries." These counties are not named but are believed to include Atlantis, Freedonia, Glubdubbdrib, Ruritania, Grand Fenwick and San Seriffe.

Contacted by BBC News, Anna Grochowalska said, "We are in possession of a great deal of technical information, with plenty of back-up historical research," adding, "as you can understand, we are not authorised to fully disclose all this sensitive information to third parties, for obvious reasons." Yes, they're bleeding obvious alright.

She also rejects accusations that the devices are a tad overpriced. She told the BBC, "In regard to the costs analysis your research has produced, I believe that the lack of in-depth information will not drive you to the exact computation of our expenses and production costs, including the cost of IP  and so on. It is therefore hard to take your evaluation seriously, since you have evidently not researched the background facts in any meaningful way."

Amazingly, the 5GBioShield does have its proponents and supporters. For example it has been recommended for use by none other than an external member of 5G Advisory Committee of the town council of Glastonbury on the Somerset Levels.

Yes, that's Glastonbury, the 'alternative' town that is the last redoubt of ageing hippies and where both the Holy Grail and King Arthur are supposed to be buried although neither have yet been found. It's also famous for the annual music festival which would have celebrated its 50th birthday this year but for the coronavirus pandemic. It should be remembered that at the 2019 event the mobile operator EE tested 5G technology across the 900 acre site and brought out droves of refuseniks and conspiracy theorists who roundly condemned the experiment and continue to do so. They seem to be a prime target audience for BioShield Distribution.

The company is now under investigation by the Police Action Fraud Squad and Trading Standards authorities. It is expected that the BioShield Distribution website will be taken down within days and sales of the device will be prohibited. And not before time.

I leave you with three "testimonials" published on that website:

1) "Where I live there is wifi and 4-g everywhere, and your bio shield is making it bearable. All of you who have developed this have done an incalculable service to humanity."

2)  "I would like to say that this is an incredible product. I noticed my field reaching coherence and eliminating the frantic energy. Most importantly it has enabled me to access a higher vibration and help the pineal gland. I am more intentional, and in touch with others on a non verbal level."

Once the pubs reopen we'll all once again be able to have such a transcendental experience and for the price of no-more than four or five pints of "Scruttock's Old Dirigible Ale". That's an appreciable saving on £330. You could buy a tinfoil trilby, some stylish lead boots and an antique teak jockstrap for that.

3) "This is the first device that actually helps me. I am highly electrosensitive to WiFi and 5G frequencies. I am using the device since 2 months and I would not sell it for a million dollars. And btw: electromagnetic radiation has transversal and longitudional [sic] components. You can only shield the transversal component with a Faraday cage. I love you all, Namaste.