Is China in the ascendency, literally and metaphorically? 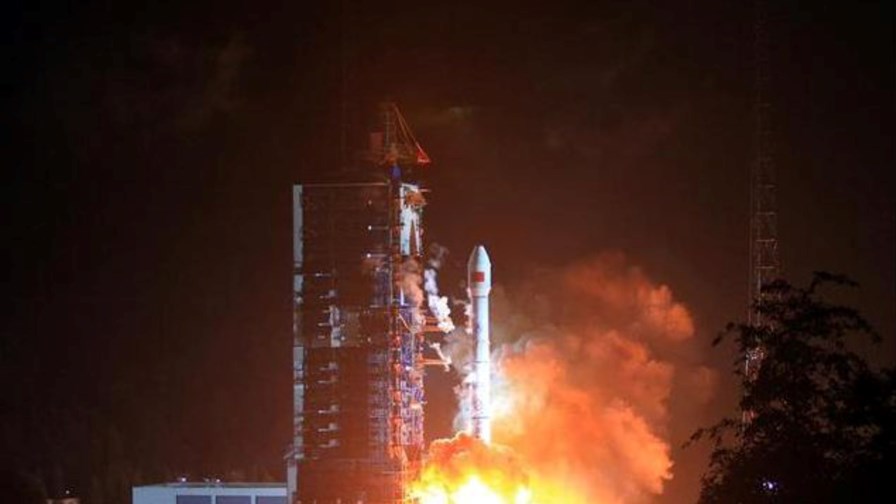 On Saturday last China launched Tiantong-01, the first of a planned constellation of geostationary satellites that will transpond and deliver mobile telecoms traffic for China Telecom. Lofted on a Long March 3B rocket from the Xichang Satellite Launch Centre in Southwestern China, the satellite was designed by China Academy of Space Technology and will form the basis of a mobile telecoms network that will provide services across the entirety of China, the Middle East and Africa.

Apart from a brief and basic announcement from the state-run Xinhua news agency confirming that the satellite was placed successfully into orbit, Chinese officials said little about the the hardware or the purpose of the proposed new system. However, US sources believe that Tiantong-01 is an S-Band (and UHF) mobile communications satellite that is the cornerstone of the long-planned China Mobile Multimedia Broadcasting (CMMB) project designed to deliver mobile data and multimedia distribution services over a vast geographic area stretching from East Africa to the Indian Ocean and out to the mid-Pacific.

It is also thought that Tiantong-01 was designed and by the Chinese Academy of Space Technology (with the help and deep involvement of the Chinese military establishment) and will operate under the aegis of ChinaSatcom. It will support voice and data traffic (including video) 24 hours a day. The flight that put Tiantong-01 into orbit was the 232nd made by a Long March rocket.

Meanwhile, Chinese companies continue to make inroads in the US, a particularly in California's Silicon Valley which is being flooded with Chinese investment money. And the sheer volume of available cash is having a marked effect on the delicate balance that Valley companies are striving to maintain between accepting Chinese cash and preserving their independence and IPR once Chinese investors do come on board.

It seems that over the past couple of years Chinese money men have been focusing on Silicon Vally start-ups. Certainly big and powerful Chinese companies such as Alibaba, Baidu and Tencent have been investing in established technology powerhouses in the Valley but many private Chinese investors as well as state-owned companies have been vying to grab stakes in start-ups that could quite quickly grow to become part of the powerful Silicon Vally establishment.

Look at the figures. According to market analysts at the New York-headquartered Rhodium Group, between January and June this year Chinese investment into Northern California was in excess of US$6 billion. Much of that cash was invested in technology start-ups working in the fields of virtual reality (VR) and artificial intelligence (AI), technological sectors that China has so far failed significantly to develop or exploit on its home turf.

And, if US high-tech companies want to grow and prosper, they may have little choice other than to take Chinese investment dollars. US investors are tightening the purse strings and the US consumer market for tech toys and apps is saturating. China's isn't. As, Chris Nicholson, the CEO of the AI company, Skymind, says, “Start-up fundraising in Silicon Valley wouldn’t function without Chinese money,” and he should know having been in receipt of funding from Tencent and several other Chinese investors.

While Silicon Valley startups are very keen to attract Chinese investments, they often find that the money comes with a lot of potential problem, including onerous conditions, cultural misunderstandings, untoward outside interference and a growing distrust between investors and entrepreneurs. The results can be devastating to the start-ups who are caught between a rock and a hard place as investors either withdraw funding, or, as has happened several times, simply copy IPR and then invest in another company, either in the US or elsewhere, including China.

Chis Nicholson of Skymind is well aware of the risks of getting involved with investors who are very much an unknown quantity. He says. “As a founder, your job is to keep your baby alive, so you can’t always afford to ask too many questions when someone comes along with terms that might not be perfect.”

Is China's long-term plan an alternative to a global economy based on the US dollar?

Much is now being said and written about China's long-term aims and goals as far as its technological development and technology investments are concerned. In the West there is much understandable concern that China's hidden (or not so hidden) motive is to build the capability to destabilise US and European economies by providing comms equipment to Western countries that will be placed in critical national infrastructure to lie doggo until the times comes that they will be activated to conduct surveillance on and launch cyber-attacks against commercial,military and governmental networks and other targets. Chinese companies Huawei and ZTE are often cited as prime suspects in this regard.

However, there is another possible scenario worth considering. The PRC has now achieved a large measure of technological (and considerable military) parity with the West and also owns a great deal of US debt. Were that to be called in it would have devastating effects on the economies of North America and the contagion would quickly spread to many other parts of the world.

By building relations (and comms and transport infrastructure) to encompass Russia and other eastern former soviet states as well as Iran and perhaps even India, China could actually build strong connections to Europe and so open-up new markets for Chinese goods and services. By so doing it might, to a greater or lesser extent, protect itself from the vagaries of an economic system based on the US dollar and develop an alternative trading bloc that might survive further huge economic shocks periodically engendered by that dollar's debt-heavy and unstable system. After all it is a truism that the Chinese plans are long-term plans and the 22nd Century is a mere 84 years away.  Just a thought.