According to the latest Ericsson Mobility Report, global cellular IoT connections are set to grow 30% a year, largely thanks to accelerating deployments in China.

By 2023, Ericsson predicted 3.5 billion cellular IoT connections worldwide. Its projections for 2023 have almost doubled within the last six months. North East Asia is expected to account for 2.2 billion of those 3.5 billion connections.

Mobile operators have commercially launched more than 60 cellular IoT networks worldwide, the report found. Chinese operators are most focused on supporting smart agriculture and smart cities, while North American operators are supporting industrial use cases like logistics and fleet management.

Analysts and industry executives expect NB-IoT to have a larger share of the IoT market over time, but say there will be a place for both technologies because they serve different use cases. Cat-M1 networks can handle slightly higher data rates, meaning that IoT applications using video or another higher-bandwidth use case might require Cat-M1. Applications that send low amounts of data at infrequent intervals can typically use the less-expensive NB-IoT.

Despite a recent report claiming that China is slightly ahead in the race to 5G, Ericsson said North America is leading the 5G uptake, with all major U.S. operators planning to roll out 5G between late 2018 and mid-2019.

Globally, Ericsson projects that 20% of mobile data traffic will be on 5G networks by 2023. While this is clearly a significant amount, it also underscores the fact that LTE and even 3G are going to be around for quite a while.

For network operators, this will mean that in some cases they may need to maintain legacy equipment alongside 5G equipment. 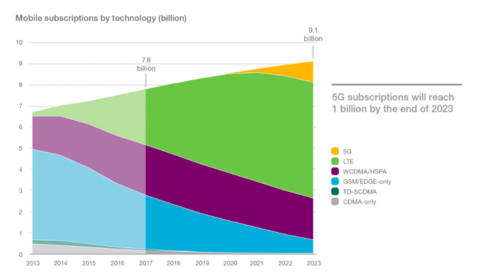