FCC releases historic document: the US Internet stats for 2017 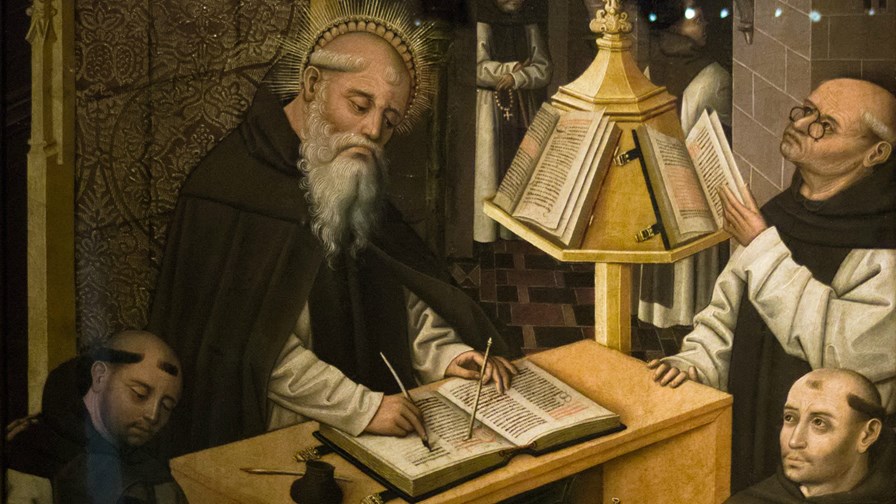 Imagine being allowed access to that holy of holies, the huge, Gothic, candle-lit scriptorium of the US Federal Communications Commission. Imagine being accorded the privilege of catching glimpses, through the swirling incense fumes, of the rows upon rows of silent, cowled figures in their habits of dusty fustian labouring with infinite patience over huge leather-bound collections of yellowing vellum and running their ink-stained fingers and strained eyes up and down endless columns of runic script as they prepare the latest Internet Access Services Report.

The scriptorium is a hallowed place where time is not of the essence. The daily round, the common task furnishes all Prior Pai of Georgetown asks and perfection is a slow and laborious process handed down through generations immemorial. But now, at last, the latest fruits of their monkish endeavours can be found chained to a lectern beneath the stained glass window commemorating St. Eugene O Sykes, the legendary founder of the Order.

Yea, look upon their works ye mighty and despair, the actual number of Internet connections in the US as at December 31, 2017 have finally been counted and vouched safe to the waiting multitudes. Next it'll be the list of the nine billion acronyms of NFV. When that monumental task is completed the stars will quietly go out and the world will end.

Quite why it has taken 21 months for the US regulator to tot up the number of Internet connections in the nation at that time (and, as a bonus, the number of connection with a downstream speed of 100Mbit/s or more) is not apparent but I suppose it might be of some limited interest as an historical document. So, for the chroniclers amongst you, below are a few choice stats.

The figures were compiled, nunc et semper, from the FCC's Form 477 which all facilities-based broadband providers are required to complete semi-annually. When these weighty parchments finally arrive in the scriptorium they are decoded by the scribes and the figures then collated. It is said that during the pressurised peak processing period the inkwells steam and the clacking of abacuses and false teeth can be heard across Washington DC from 12th Street SW all the way to Foggy Bottom.

The 421 million figure was a four per cent increase on the total recorded at the end of 2016. Mobile Internet connections were up by four and a half per cent over the same period and stood at 313 million. Fixed connections also rose, by two per cent, to 108 million. The median Internet speed in the US (i.e. the middle value in a list of numbers ordered from the smallest to the largest) was 60 Mbps downstream and five Mbps upstream. The report reveals that 69 per cent of US subscribers got a minimum of 25 Mbps connectivity, of which 37.5 per cent got at least 100 Mbps.

The great majority of high-speed downstream access was via cable modems which accounted for 62.3 per cent of connections over 200 kbps with access through DSL technology (21.9 per cent) and FTTP (12.9 per cent) in second and third places. The 'new' figures show that, back in those days, the FCC calculated that more than 1100 service providers were offering FTTP and 700 providing DSL-based connections

And finally, wistfully gazing upstream like a salmon impatient to spawn before carking it, the FCC reports that 27 per cent of fixed connections delivered at least three Mbit/s but were slower than six Mbit/s. Not exactly speedy then, then.

The fact of the matter is that the stats are so late in being published as to be of very limited relevance in a rapidly changing comms landscape and no reason is given for the delay in their release. However, the FCC does say that it is "refining its broadband study methodologies" not least because they have come under sustained criticism for being laggardly and inaccurate and the regulator actually admits that during December 2017 mobile Internet connections were "under-reported" by five per cent. They remain uncorrected so the published stats are wrong anyway. What's the point?

But never mind. By the end of 2025 we may get the FCC's figures for 2019. That will be akin to publishing the Book of Revelation after Yurrd the Unknown, Rogga of the Seven Atrocities, Zorrm the Desolate, and Azraeuz the Silent King - the jolly lads whose professional stage name is "The Four Horsemen of the Apocalypse" - have together laid all to waste and have gone on a long and restful vacation in Pandemonium.