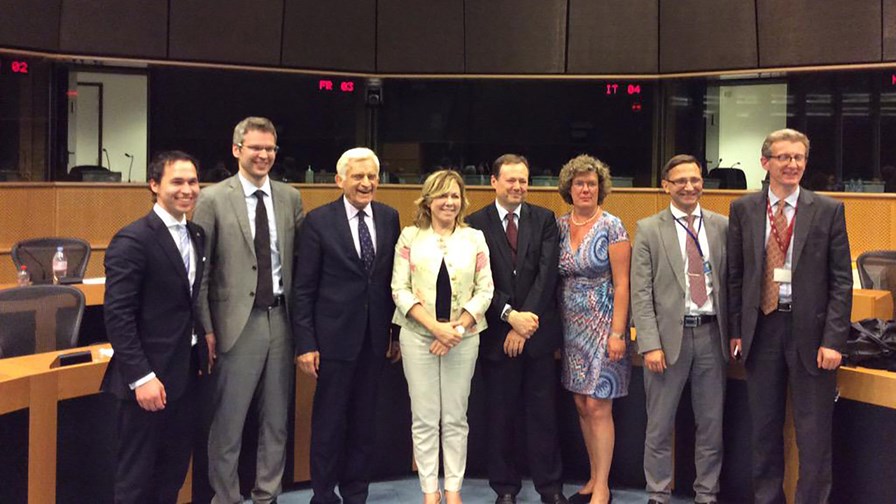 Oh glorious day, if you live in Europe that is, and aren’t a telco. Earlier this morning, the trilogue meeting of the European Commission, European Parliament and the Council of Europe agreed a compromise on the EC’s proposal for a telecoms single market. The result is the end of roaming charges – for voice, text and data – in June 2017 in Member countries, with mobile phone users paying exactly the same price as they do at home; plus, new net neutrality rules designed to protect the right of every European to access Internet content, without discrimination.

These measures will be completed by a widescale overhaul of EU telecoms rules in 2016, which will also include a more effective EU-level spectrum coordination process.

"Europeans have been calling and waiting for the end of roaming charges as well as for net neutrality rules,” said a jubilant Andrus Ansip, Commission Vice-President for the Digital Single Market. “They have been heard. We still have a lot of work ahead of us to create a Digital Single Market. Our plans to make it happen were fully endorsed by Heads of State and Government last week, and we should move faster than ever on this."

The EU says prices for roaming calls, SMS and data have fallen by 80 per cent since 2007, and data roaming is now up to 91 per cent cheaper compared to 2007. Under today's agreement roaming charges will cease to exist in the EU as of 15 June 2017. The EU has pledged to help enable all technical conditions necessary to ensure that the end of roaming charges is operational as of day one. In the meantime, from April 2016 roaming will become even cheaper, with operators only permitted to charge an extra €0.05 per minute for voice calls and €0.05 per MB of data.

Today's agreement also enshrines for the first time the principle of net neutrality into EU law. Users will be free to access any content and will not be unfairly blocked or have their speeds throttled. What’s more, paid prioritisation will not be allowed.

“Access to a start-up's website will not be unfairly slowed down to make the way for bigger companies,” explained the EU in a statement. “No service will be stuck because it does not pay an additional fee to Internet service providers. There won't be gatekeepers to decide what you can and cannot access.”

All traffic within the EU will be treated equally, subject to strict and clearly identified public-interest exceptions, such as network security or combating child pornography, and – here comes the caveat – subject to efficient day-to-day network management by ISPs.

This won’t affect ISPs ability to offer specialised services of higher quality, such as Internet TV and whatever new innovative applications may be around the corner, so long as these services are not supplied at the expense of the quality of the open Internet.

The new rules – which the EU says will be the strongest and most comprehensive open Internet rules in the world – will come into effect across all Member States on 30 April 2016.

The magic word here is “compromise”

Of course, not everyone is going to be happy about this deal. So far, the mobile operators are maintaining radio silence on the announcement. Expect them to be somewhat displeased, to say the least, by the end of roaming charges.

But they have managed to squeeze an extra year of roaming (albeit at vastly reduced rates), and will also benefit from a “Fair Use Safeguard” to prevent “abusive use of roaming services, such as ‘permanent roaming’, which otherwise could undermine domestic markets.”

But there will also be net neutrality supporters who will feel let down. Is this what was envisaged when the proposal was first put forward two years ago? No, it’s not, but then net neutrality is a devilishly complex concept, that you could argue has only really ever been theoretical and that all traffic suffers restrictions at some point or other within today’s networks.

The “efficient day-to-day network management” clause needs closely watching, but apparently cannot be evoked if the ISP or network operator simply hasn’t bothered to invest sufficiently in their service. There are also public interest exceptions – some to block illegal content and others to enable anti DDoS measures (which we’ll see more of with the advent of SDN and controlled packet dropping). But aren’t all agreements compromises?

"I welcome today's crucial agreement to finally end roaming charges and establish pragmatic net neutrality rules throughout the EU,” said Günther Oettinger, Commissioner for the Digital Economy and Society. “Both are essential for consumers and businesses in today’s European digital economy and society. We will build on these important foundations in our forthcoming review of the EU's telecoms legislation."

Today's agreement between the various politicians will have to be formally approved by the European Parliament and the Council and published in the Official Journal to legally come into effect. The promise of a more coordinated approach to spectrum policy will be discussed as past of the up-coming review of the 2009 Telecoms Package, which is part of the Digital Single Market Strategy.