### Worldwide tablet shipments hit 37.5 million units in Q2 2020, a remarkable 26% year-on-year increase. Tablets, part of the PC market, had faltered in recent years, but demand in Q2 2020 was boosted by consumers and businesses wanting affordable access to basic computing power and larger screens to facilitate remote work, learning and leisure. Vendors were able to ramp up production to meet this renewed demand. At the same time, retailers and carriers in various markets provided financial incentives on devices and data to encourage tablet purchases.

The top five tablet vendors all benefited from the surge in demand to post double-digit growth and reach shipment levels usually associated with the Q4 holiday season. Apple grew iPad shipments by 20% to lead the market once again, shipping more than 14 million units, a record for a second quarter. Samsung maintained its second-place position, shipping 7 million units and growing 39%. Huawei came third, with shipments up 45% year on year, thanks to a particularly strong performance in Western Europe. Amazon followed with an increase of 37%, then Lenovo, which leads the overall PC market, and was the fastest growing tablet vendor, up 53%. 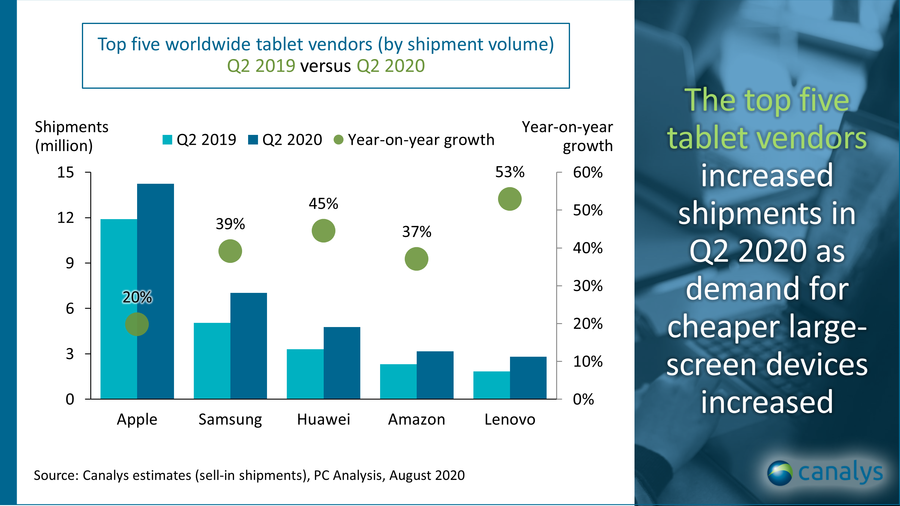 “Tablets enjoyed a renaissance in Q2 2020 because the devices tick so many boxes for remote work and education use,” said Canalys Analyst Ishan Dutt. “The ability to collaborate virtually as well as view and interact with digital content has become paramount, especially in the education space. The coronavirus pandemic has increased competition for communal screen access between household members forced to stay indoors. Tablets help overcome this problem by allowing each family member to have their own device. And they are more budget-friendly than desktops and notebooks. For users with greater productivity needs, the proliferation of detachable tablets has been a boon. These devices have gained traction as primary devices for work and it is vital to include them when evaluating the PC market as a whole. Apple and Lenovo’s recent success shows that having a tablet offering as a mainstream PC vendor is invaluable.”

“The channel and carrier ecosystem around tablets has also played a significant role in this stellar Q2 performance,” said Canalys Senior Analyst Ben Stanton. “Vendors and retailers in mature markets have offered massive discounts as part of their back-to-school promotions. They have also ramped up their capacity to manage online sales and delivery in the face of lockdown measures. Carriers have also taken important steps beyond just providing devices. For example, in the United States, AT&T offered 60 days of unlimited wireless data service for education-issued tablets to qualifying schools nationwide. In many mobile-first markets in Asia Pacific, where 4G connectivity is often cheaper and more reliable than broadband, having a wide range of connected tablet options has been vital to ensure remote education is possible.”