Lights go out at Lumina Networks 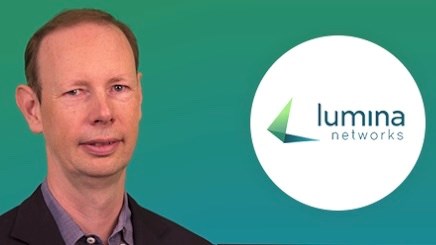 Just three years after launching with the financial backing of two of the world’s biggest network operators, open source SDN controller vendor Lumina Networks has taken the tough decision to shut its doors and wind up the company.

Formed in 2017 when it spun out of Brocade under the stewardship of Andrew Coward (pictured above), Lumina was backed by investments from Verizon and AT&T, plus Rahi Systems, rather than the venture capital (VC) community. It announced a $10 million Series A round in May 2018, of which $8 million came from Verizon Ventures, and ultimately raised a total of $14 million from its backers.

But despite having two marquee customers to propel it into a telecoms market that has been steadily shifting towards software-defined architectures and (seemingly) embracing open source options as part of the technology mix, Lumina, which until recently employed more than 90 staff, has been forced to wind down and raise what money it can from its intellectual property.

In a statement posted on the Lumina website, Coward noted that while open source software has found its way into telecoms network architectures in recent years, the actual levels of support in terms of business engagement didn’t necessarily match the vocal support. “While many in the telco community applauded our work, and planned deployments, revenue has not followed at the scale required for us to operate and manage a large open source project,” he noted.

He also noted the tough terrain for small players in the telecoms market, where large incumbent vendors continue to dominate.

Despite having to oversee the wind down of his company, the CEO, a regular contributor to TelecomTV discussions over the years, found time to answer a few questions about the factors that led to Lumina’s demise.

TelecomTV: Why has Lumina closed down? This seems very sudden -- has this been inevitable for some time or was there a particular set of events that led to the decision? Was Covid-19 a factor? Have there been any issues with the company’s code?

Andrew Coward: As you know, the telco market moves at a glacial pace, and despite the importance of open source and automation to the industry, and assurances that projects were high priority and would move quickly, telcos simply haven’t moved at anywhere close to the pace required to run a successful company.  Covid-19 exacerbated the situation, as CapEx has been diverted from long-term projects such as automation to raw infrastructure build-out.  We weren’t able to survive both of these simultaneously.

Over the last few years, OpenDaylight has achieve two important goals.  The first is that telcos have compelled proprietary vendors to make their products work with OpenDaylight in order to deploy. This change is as important as the agreement on standard protocols, such as BGP.  The second is that OpenDaylight has reached large scale deployment, meaning the management of tens of thousands of network devices simultaneously. So the irony is that while these goals have been reached, we simply didn’t have the capital or revenue support to continue.

TelecomTV: Has the competitive landscape changed at all? Was Lumina the victim of a squeeze by larger players in the market?

Andrew Coward: Obviously the large vendors woke up to the fact they didn’t have competent automation strategies for their customers and have stepped up with first offerings.  That has certainly created a lot of noise in the market.  However, none of these vendors can resolve the fundamental issue, which is their automation tools only automate their products – in fact, they are using their tools as a lock-in strategy, not to open up the network.

TelecomTV: Was there an option to try to raise more funding from Lumina’s investors or was that avenue closed?

Andrew Coward: Traditional VCs have stayed away from funding telco-focused startups for good reason – the sales cycles are too long and telcos rarely shift enough spending away from their incumbent vendors to provide an attractive return.  For this reason, we have been dependent on telco investment and on getting to breakeven quickly.  Paradoxically, most telcos don’t actually invest in infrastructure startups because they are chasing the same returns as traditional VCs.

TelecomTV: AT&T and Verizon were financial backers and customers, but did Lumina have any other telco customers? Did it lose any vital customers that led to the closure of the company?

Andrew Coward: Absolutely, we have deployed with large telcos in Europe and Asia and our customer base was growing.  However, none of these new customers are yet deploying at scale, and so the shift of revenue from incumbent vendors had yet to happen.

TelecomTV: Is the company completely closed down or is there still a skeleton team winding the company down? Does the company have any assets it could monetize?

Andrew Coward: We’re going through an orderly shutdown, with a small team, and are working with a number of companies to licence our intellectual property.   We’ve been building applications on top of OpenDaylight for the last six years, publishing pieces out to the open source community over time, so there is significant residual value in what we’ve built.

TelecomTV: What will happen to the deployments of Lumina’s technology? How will they be supported?

TelecomTV: Have attitudes changed towards SDN controllers as telcos have worked towards their 5G rollouts? Is SDN still seen as an important technology by network operators?

Andrew Coward: SDN is a critical technology in the deployment of 5G core, and the control of infrastructure generally.  The industry is at an inflection point in this journey – do telcos press the “easy button” and allow traditional vendors to lock them into completely proprietary end-to-end solutions, or will they double-down on open source as a way of breaking this hegemony? Unfortunately, us going out of business removes one of the few tools telcos had to fight back.

TelecomTV: Lumina has always been an open source company focused on the telecoms sector – was it maybe too early with that proposition? Is the telco sector still not quite ready to fully embrace open source?

Andrew Coward: There was a massive amount of heavy lifting we had to do, to help get the telco community to the place it is today with open source networking.  Someone had to start that journey, and that someone was us.  We would have loved to continue the journey, but without a significant shift in capital being invested by telcos themselves – in both start-up investment and in product purchases this isn’t going to be possible for us, or indeed for others who may dare to tread in our footsteps.

TelecomTV:  What have you learned from the past three years?

Andrew Coward: I think we’ve achieved an incredible amount over the last three years and really changed the industry.  Ironically, one of the benefits of open source we promoted – that it would survive us – has turned out prophetic.   Ultimately, what kept us nimble, scrappy and frugal, also made us fragile, because we never had the depth of capital to support an extended delay in getting to the wide-spread adoption needed for our business model to work.

TelecomTV: Do you have any idea what you will do next? Do you think you will stay in the telecoms/comms networking market?

Andrew Coward: Obviously for all of the Lumina team, we’re faced with an unexpected shift in our careers and helping the team land their next jobs is my number one priority right now.

Until last week, I’ve loved every minute of our journey and am addicted to challenges that change our industry for the better.  So for me, I’ll be looking to find something that comes with an equal amount of adrenaline and industry-changing excitement.