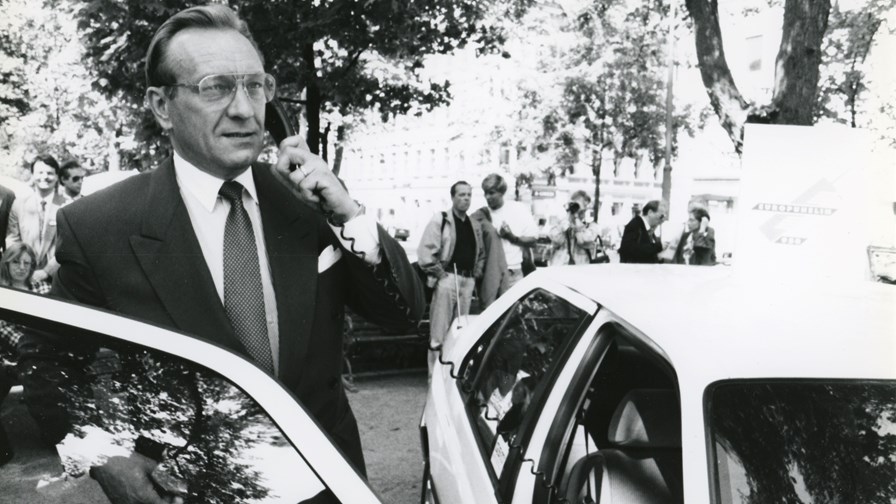 While the industry is very much focused on 5G right now, and even look towards 6G, let’s sit back for a moment, light some virtual candles and sing Happy Birthday to GSM, which today marks the 30th anniversary of the first 2G call, placed on 1st July, 1991, by Harri Holkeri (pictured above), then prime minister of Finland, to Kaarina Suonio, vice mayor of Tampere, over Radiolinja’s 900MHz network that was built using technology from Siemens and TeleNokia. The two politicians extolled the virtues of the new technology and, of course, comment on how clear the call was – Holkeri is reported as saying it was “like speaking to a neighbour.” It’s hard to stress just what an impact the development and spread of GSM has had on the world and the role that companies such as Siemens and Nokia, as well as the support of politicians such as Holkeri, have had on its development over the years. In fact… Nokia has very kindly let us know that its current CEO, Pekka Lundmark, was on the scene when GSM was being put through its test and measurement paces in early 1991… Lundmark was working as client lead for network operator Radiolinja at that time and was involved in 2G’s development… and here he is now, having come back full circle in what is a very different world to the one of 1991.

NEC has unveiled cloud-native Open RAN software to support its digital beamforming of Massive MIMO, functionality that will be of particular interest to those operators looking at urban Open RAN deployments. NEC says the solution will be available globally from the beginning of 2022. Read more.

And there’s more from the giant Japanese vendor… NEC and its subsidiary Netcracker have deployed their 5G Core and BSS and OSS applications on Amazon Web Services (AWS). In a demo shown at MWC, NEC showed how its 5G Core control plane could be deployed on an AWS Region and its 5G UPF on an AWS Outposts edge location. Read more.

Mavenir has gained further traction in the Open RAN market by striking a deal to provide Ligado Networks with remote radio units and Open RAN software for the US alternative operator’s enterprise mobile network rollout plans. Ligado, which has a license for L-band spectrum in the 1.6 GHz band that can be used for terrestrial 5G and IoT networks, has aspirations to build and manage private enterprise wireless networks using multi-vendor systems – it is already engaged with Rakuten Communications Platform and Nokia for the development of various network elements. Mavenir has really stepped forward as the most prominent Open RAN specialist in the past few months, with multiple industry engagements, partnerships and technology developments. Its latest engagement, with Ligado Networks, is an example of its breadth and ability to adapt, because it’s not only providing its Open RAN software but also radio heads, and all the tech has been developed to run in Ligado’s L-band 1.6 GHz spectrum. Mavenir has taken advantage of this MWC week to showcase its various talents, having announced: Its deal to be a major Open RAN partner to Axiata in Asia; highlighting its role in Deutsche Telekom’s O-RAN Town and Orange’s experimental, cloud-native network in northern France; building a standalone Open RAN-based campus network with NTT Data in Germany; and more! There’s little doubt that its business is growing significantly, so we wonder if we’ll see the re-emergence of its plans for an IPO anytime soon…

Ligado’s agreement with Mavenir is just the latest example of open enterprise 5G activity. Another is the unveiling of OmniRAN, a virtualized radio access network system developed by server hardware vendor Quanta Cloud Technology (QCT) in partnership with Radisys, which brings its Connect 5G RAN software to the mix, and Intel, which is providing its FlexRAN reference implementation and 3rd generation XEON scalable processors. QCT says OmniRAN has already been put to work in smart manufacturing deployments.

ABI Research has produced a new competitive assessment and in-depth evaluation of the services offered by nine 5G Core and Edge players, including established vendors with their existing operator relationships and the new set of pure-play software vendors. ABI ranks both categories of vendor and picks out Huawei and Ericsson as the overall market leaders. Mainstream runners up are Nokia and ZTE. The report names, in ranking order, Mavenir, Microsoft-owned Affirmed Networks, HPE, Samsung and Athonet as ‘followers’. It says the pure-play software vendors offer disruptive innovation and agility and are shaping their growth businesses with what constitutes “discontinuous innovation”. Rather than attempting to bring better products to the market, they disrupt and redefine the trajectory of the market by introducing solutions that, in their early stages, may not be as performant as currently available products but are typically simpler, offer convenience and flexibility, and are less expensive. The findings are from ABI Research’s 5G Core and Edge Platforms competitive ranking report.

Telenor has appointed Bjørn Ivar Moen as CEO of Telenor Sweden. He takes up the role on 1st October. Moen has an extensive industry background stemming from more than 20 years in Telenor, including roles as CEO of Telenor Broadcast and Canal Digital and as acting CEO of Telenor Norway. He has also served on the boards of companies in telecoms distribution and various other areas.

Ooredoo and CK Hutchison Holdings have extended their exclusive discussions concerning the merger of their respective telecoms businesses in Indonesia (Indosat and 3 Indonesia) until 16 August 2021. “Discussions between the Parties have been progressing well and are at an advanced stage,” according to the duo.