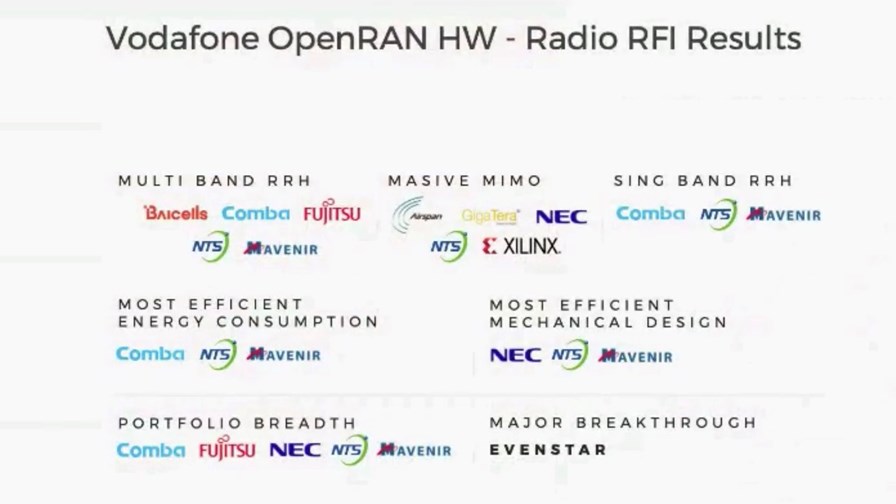 Vodafone’s Head of Network Strategy has identified the vendors that came out on top in its request for information (RFI) for Open RAN-enabled radio unit hardware products and the results will not only provide a massive marketing boost, and technology validation, for companies such as NTS, Comba and Mavenir but also put pressure on some vendors to hit a sub-$1,000 price point.

Speaking during the opening session of the digital TIP (Telecom Infra Project) Global Insights event, Yago Tenorio gave an overview of which companies are the “front runners” based on its Open RAN requirements.

He noted that, of the categories shown in the RFI results breakdown, the “most important role is [shown on the top line]… multiband radios for massive MIMO or single band radios, from our perspective, and according to the requirements we use, these are the companies that you may want to pay attention to.”

That spells very good news for any of the companies shown, but particularly for Chinese vendor NTS, Comba Telecom and Mavenir, which featured strongly.

But Tenorio went on to note that, for the RFI process, Vodafone included in its assessment a hardware radio unit built (by Vodafone’s own team) using the Evenstar specifications developed by TIP that is on course, within months, to be able to deliver a product at less than $1,000 per unit. And according to the results, that Evenstar product came in third overall in the ranking of the radio unit hardware products assessed.

That will put pressure on the likes of NTS, Comba, Mavenir et al to crunch their costs even lower in the coming months to be able to match the unit price, as well as functionality, demands of Vodafone and other operators looking to take advantage of Open RAN radio units.

It's also worth noting that none of the traditional radio network system vendors feature in Vodafone's roll call of Open RAN radio unit hardware stars. That's not a big surprise where Huawei and Ericsson are concerned, as neither has (yet) jumped aboard the Open RAN bandwagon, but Nokia is a vocal supporter of the Open RAN model and claims to have products that meet the O-RAN Alliance specifications used as the de facto guide by the mobile network community.

Tenorio also noted that Vodafone would also soon to be issuing an RFI for the distributed and centralized units (DU/CU) that, along with the radio unit and accompanying software, comprise an Open RAN deployment. And with Tenorio happy to share the results of his company’s RFIs, vendors will want to get involved and impress the operator in the hope of basking in the Vodafone spotlight.

Next, of course, Vodafone will need to make some commercial decisions for any commercial Open RAN radio unit deployments (beyond its current early steps), so the process for the radio hardware vendors is far from over, but at least they know which companies are in the frame for some purchase orders.