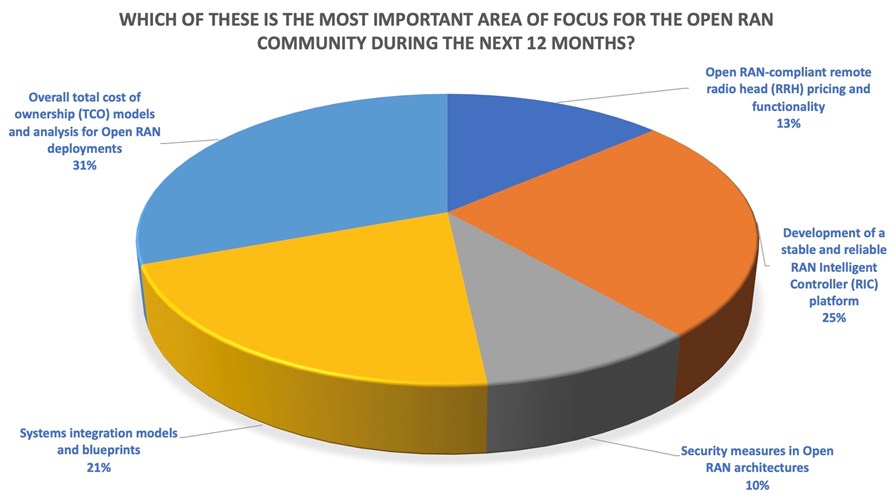 There’s a lot of time and effort being poured into Open RAN technology development right now in order to meet the stringent needs of mobile operators, but the primary focus of the Open RAN community should be on the total cost of ownership models and analysis during the coming year, according to delegates participating in TelecomTV’s recent Open RAN Summit.

During the course of the three-day digital Summit, registered attendees were asked to vote in a poll that asked: Which of these is the most important area of focus for the Open RAN community during the next 12 months? More than 170 delegates voted in the poll.

The delegates had five options from which to choose, with ‘Overall total cost of ownership (TCO) models and analysis for Open RAN deployments’ coming out on top with 31% of the votes (see graphic above).

This option was the most popular throughout the Summit as the votes came in, and it’s perhaps not surprising that this won out over technology considerations, as the big questions that network operators need answered right now about Open RAN are ‘Will it work?’ and ‘What’s the return-on-investment case?’ Procurement and CFO office teams will be asking a lot of questions...

And while there are already early deployments of Open RAN that can provide some partial answers to the first questions, much less is known about the overall upfront and ongoing costs of an Open RAN deployment, and what kind of models might be used to forecast short-, medium- and long-term capex and opex outlays (especially as systems integration expenditures are tough to predict and will likely be a significant part of the TCO).

But not too far behind, with 25% of the votes, was ‘Development of a stable and reliable RAN Intelligent Controller (RIC) platform’: That’s a very interesting outcome, as it highlights the growing awareness of just how important the RIC will be in delivering many of the promises the Open RAN community is making in terms of functionality and flexibility. (See RIC at the heart of the Open RAN action.)

Only a few votes behind, with 21% of the total votes was the option ‘Systems integration models and blueprints’: What’s becoming clear is that while network operators want the interfaces between the disaggregated Open RAN elements to be (as the name suggests) open, they also don’t want to be doing all of the pre-integration and testing processes themselves – hence, right now, the sector is seeing many vendor alliances and partnerships that are bringing key Open RAN elements together in pre-packed, tried and tested combinations, with the proviso of course that any of those elements could ultimately be swapped out/replaced if required without having to start again from scratch. Blueprints that suggests certain architectural models and deployment options will also be key to shortening planning cycles and helping to educate the market, with organizations such as the Telecom Infra project (TIP) dedicating time and effort to blueprint developments.

Fewer votes were cast for ‘Open RAN-compliant remote radio head (RRH) pricing and functionality’ (with 13% of the votes), perhaps because there is already a reasonable array of competitive options (even though it’s unclear as yet whether the magic sub-$1,000 price target has bene reached, especially in these supply chain-constrained times).

And perhaps surprisingly, only 10% of voters believe that ‘Security measures in Open RAN architectures’ should be the main focus of the Open RAN community during the coming year”: It might be interesting to ask the same question next year and see if the security option garners more votes as Open RAN rollouts gather pace.

Be sure to check out the Open Ran Summit sessions, which include executive interviews with senior decision-makers from Rakuten Mobile and Vodafone as well as a number of key roundtable discussions and the ever-lively ‘Live Q&A’ sessions, during which the guests get peppered with questions from the Summit’s delegates. You can see all of the sessions right here: To view them, simply register for the Summit – it’s quick, easy and free!

And register now for our upcoming AI and Automation Summit, when we’ll have more great discussions and interviews and another poll question for your consideration.