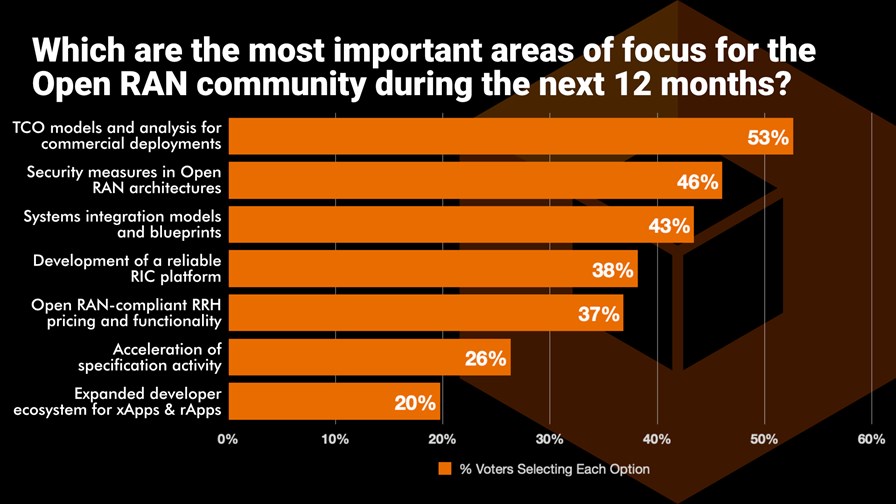 The Open RAN community needs to focus on total cost of ownership (TCO) models and analysis for commercial deployments over the next 12 months, according to the results of a poll conducted during TelecomTV’s recent Open RAN Summit.

We asked summit attendees: Which are the most important areas of focus for the Open RAN community for the next 12 months? Those who voted could select as many of the options as they deemed appropriate.

Throughout the summit, the option ‘TCO models and analysis for commercial deployments’ kept attracting the most votes and ended up being selected by 53% of respondents. While that does represent a majority, it also means that almost half of those who voted don’t believe TCO models are the most important aspect on which the Open RAN community should focus during the coming year.

Not far behind, cited by 46% of those who participated, was the option ‘security measures in Open RAN architectures’, while ‘systems integration models and blueprints’ garnered votes from 43% (a surprisingly low score).

And while the RAN Intelligent Controller (RIC) might be a hot topic in Open RAN circles right now, only 38% of voters believe the ‘development of a reliable RIC platform’ is among the most important areas of focus in the short term. About the same number, 37%, believe ‘Open RAN-compliant remote radio head (RRH) pricing and functionality’ should be near the top of the to-do list.

Interestingly, while many speakers during the two-day Open RAN Summit mentioned that the industry would benefit from speedier specification work, so that the whole industry is singing from the same technical hymn sheet, only 26% of poll voters selected the option ‘acceleration of specification activity’.

And as if to hammer home that RIC-related developments are for medium- and long-term research and development programmes, only 20% of voters thought the development of an ‘expanded developer ecosystem for xApps & rApps’ (the applications that run on RIC platforms) was a priority for the Open RAN brigade over the next 12 months.

While market activity around, and interest in, Open RAN continues to grow, it’s still very early days for the deployment of, and investment in, disaggregated, open interface-based mobile access network infrastructures. The market will now watch closely to see how Dish Network’s Open RAN-based 5G network performs over the coming months as the number of users connected to the network grows, following its launch earlier this month. But in the meantime, there are still very many moving parts related to Open RAN that need to be addressed and it still looks like the telecoms sector might need to wait until the second half of 2023 and 2024 to find out what kind of impact Open RAN will have on network operator investment and deployment plans and how it will reshape the vendor landscape.

You can catch up with all of the Open RAN Summit sessions on demand here, and keep up to speed with the latest Open RAN sector developments via TelecomTV’s Open RAN channel.