Open RAN community cranks up the noise ahead of #MWC22 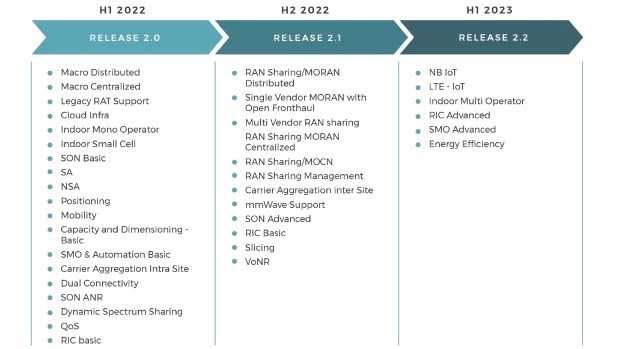 For anyone heading to the MWC22 show floor in Barcelona, there are a few hot topics of conversation (or in-your-face marketing) that will be impossible to avoid, and one of those is Open RAN.

The disaggregated architecture is attracting higher levels of interest among operators, the volume of Open RAN-ready products hitting the market is growing, and industry bodies are ready to update on the specification and blueprint developments.

-- Deutsche Telekom is one of the major operator flag-wavers for Open RAN, and earlier this week the operator announced it has deployed massive MIMO technology using the Open RAN fronthaul specs at its O-RAN Town in Neubrandenburg, Germany, for what it claims is a European first.

-- The Telecom Infra Project (TIP)’s OpenRAN Project Group has just published its Release 2 Roadmap Document after “conducting a thorough industry review with input from both the supply and the demand sides –  including some of the world’s largest operators,” including DT, Orange, Telefonica, TIM (Telecom Italia) and Vodafone. For more on its Release 2 roadmap see the chart above, and for more on its developments, see this announcement.

-- As noted on Thursday, AT&T has been working with Intel on a development called Advanced DU pooling that ims to increase the efficiency of RAN deployments and free “5G radios from the limitations of dedicated base stations.” AT&T noted the “DU pooling technology was made possible by combining AT&T’s deep knowledge of Open RAN technologies as one of the co-founders of the O-RAN Alliance with Intel’s expertise in general purpose processors and software-based RAN through its FlexRAN™ software stack running on Intel 3rd generation Intel® Xeon® Scalable processors. The open standards for communications between radios and DUs that were published by O-RAN enabled its development, and the result is a technology demonstrator implemented on FlexRAN software.”

-- Also on Thursday, Rakuten Mobile and Qualcomm Technologies announced they are to jointly develop a “next-generation 5G Radio Unit (RU) with Massive MIMO capabilities and distributed units (DUs)” that will then be taken to the global market by Rakuten Symphony as part of its recently-announced Symworld portfolio of Open RAN products. Expect to hear a lot from Rakuten Symphony during MWC22.

-- NEC says it has “dramatically” expanded its open RAN Radio Units portfolio with the introduction of 18 new Radio Units that “complement NEC’s existing portfolio to help meet the demands of private and public mobile networks that will drive Open RAN initiatives forward this year.” Read more.

-- The O-RAN Alliance is to provide and update on its developments during a presentation on March 1, 2022 from 17:05-17:50 CET at MWC22 hosted by Deutsche Telekom at Hall 3 Stand 3M31. The event will include a keynote by Andre Fuetsch, Chairman of the O-RAN ALLIANCE and Chief Technology Officer of AT&T.