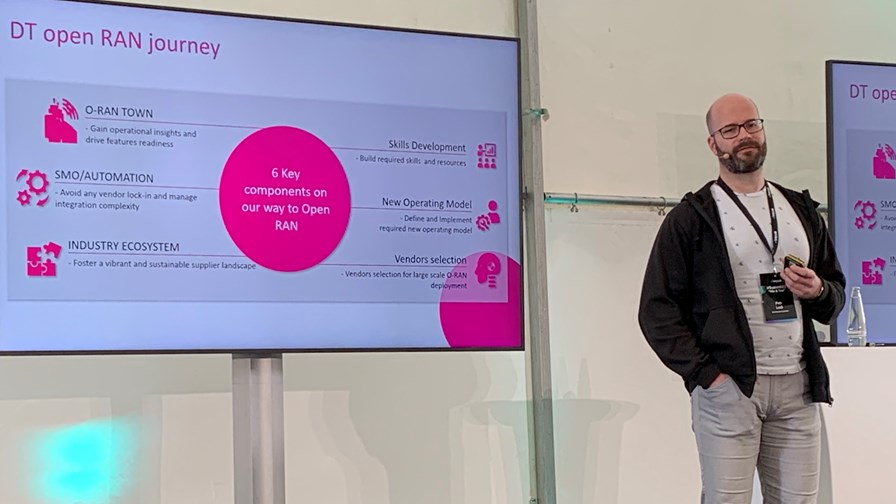 BERLIN – i14y lab ‘Mix & Test’ Summit – Deutsche Telekom is putting its heart and soul into supporting the emerging Open RAN ecosystem as it advances its own efforts to integrate open, disaggregated systems into its future radio access network rollouts, but there are many challenges to overcome if its economic, technical and operational targets are to be successfully met, noted Petr Ledl, the German operator’s head of Open RAN research and trials during a presentation at the recent i14y lab summit in Berlin.

Ledl noted that an Open RAN architecture has a large number of functional components and “many interfaces, so we need to focus on a manageable number of [networking] areas in order to deliver a working system.”

For DT, the focus is on three main areas of the Open RAN architecture: The open fronthaul interface that allows an operator to “decouple the radio unit from the baseband unit and deploy it eventually as a multi-vendor system”; the decoupling of the hardware and software within the baseband unit so that, using virtualisation, new capabilities can be introduced that helps to speed up the rate of innovation in the radio access network; and the development of an independent management framework that enables components to be added or changed without “having a significant impact on how the network is managed or changing the whole management environment.”

All of these areas are complex and, understandably, “there are a number of challenges we need to address,” noted Ledl.

The first is systems integration. The big challenge here is the tradeoff between taking control over the network architecture and its composite elements and the complexity that comes with taking more control. DT is hoping to figure out the best balance by focusing on the three main areas of Open RAN it’s exploring, noted Ledl.

It's fair to say that systems integration has been the standout challenge related to Open RAN from day one, and that doesn’t appear to have changed. Can Open RAN architectures be deployed economically without incurring a massive integration headache and associated costs? Finding a positive balance will be make or break for the Open RAN sector, it seems... and the systems integration companies know this as well and can see significant business opportunities for themselves as the likes of DT, Vodafone, Orange, Telefónica and others advance their Open RAN plans.

In addition to the integration challenge, there is the ongoing issue related to the (im)maturity of specifications – “because if the interface specifications are not mature enough, then you end up with a lot of a lot of proprietary extensions” – as well as the performance capabilities of Open RAN technologies (because they will need to live up to current high standards of the traditional RAN systems). Ledl also highlighted the challenging legal structure and relationship management issues related to multi-vendor deployments – “do you have multiple contracts, or just one contract?” – as well as the shifting nature of the skills sets needed within an operator to manage an Open RAN deployment especially as more automated processes and new tools and cloud-oriented working practices are introduced.

That’s quite the list... and it’s the same for every operator.

So how is Deutsche Telekom addressing all of this? Well, it is currently working on six specific steps on its Open RAN journey that, it hopes, can help it address those challenges and set it on the right path to building the most appropriate network platforms for the future.

The first step is the rollout and testing underway in what the operator calls O-RAN Town, which refers to the Open RAN deployment underway in Neubrandenburg, a town of about 65,000 residents north of Berlin. There, says Ledl, DT is “gaining experience in how to deploy and operate such an environment.”

The second involves the development of its own SMO (service management and orchestration) software, which is being developed on ONAP (Open Network Automation Platform), the open source network management software stack that is part of the Linux Foundation. “We are taking a portion of the open source code and complementing it with our own efforts and innovation, and that’s what we’re using in O-RAN Town,” noted Ledl.

Then there’s the development and evolution of the Open RAN ecosystem: Here Ledl highlighted how important it is for operators to collaborate on providing the vendor community with the solution designs they need to reduce integration efforts and help focus the efforts of the vendors looking to provide useful Open RAN technologies to the telco community.

Finding and developing the most appropriate skills and figuring out how to adopt appropriate new operating models and processes are areas of ongoing focus in which Deutsche Telekom is investing a lot of time and effort, noted Ledl.

And last, but certainly not least for the industry, there’s the important matter of vendor selection. “We are looking at what solutions are available for the types of functions we plan to use,” he noted briefly, without providing any guidance on which vendors might be in line for the large scale Open RAN deployments that DT has planned. It’s worth noting, though, that Dell, Fujitsu, Intel, Mavenir, NEC and Supermicro were all named as technology partners for the O-RAN Town at this time last year, but it should also be noted that this provides no guarantees for commercial selection.

“So these are the areas where you need to invest if you are really committed to deploy [Open RAN]... which is the case on the DT side,” concluded Ledl.

Ultimately, the question for DT and other operators equally committed is, 'Will it be worth it?' But having spoken to executives from DT, Vodafone and others at the Berlin event and elsewhere in recent weeks, they are more convinced than ever that this is the way to go for the future of their radio access networks.