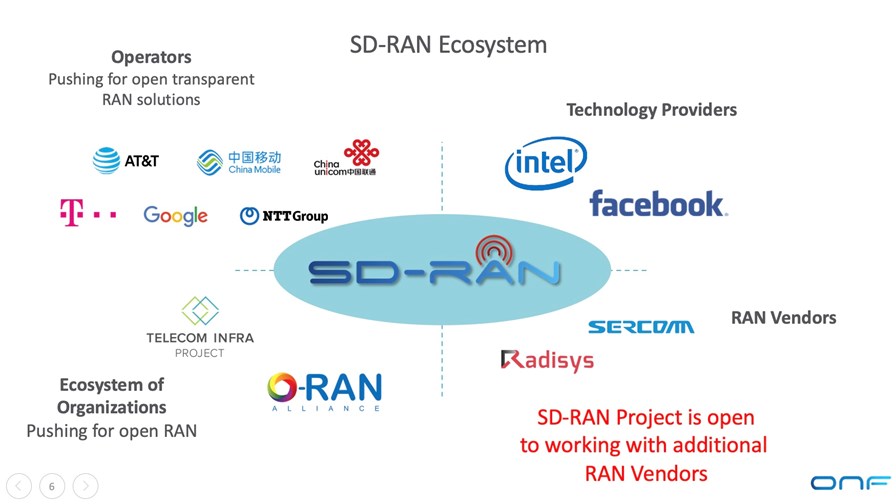 With the backing of major of network operators frustrated at pace of open RAN developments, the Open Networking Foundation (ONF) has kickstarted a Software Defined Radio Access Network (SD-RAN) project that aims to develop specific elements for disaggregated RAN rollouts that have so far not attracted enough focus and attention from the vendor community.

So what’s this? Another industry group trying to solve the same problems as multiple other groups? Well, yes… in part. But it seems the catalyst for the creation of this group is the impatience of operators that feel the open RAN development community needs a bit of a kick up the gluteus maximus.

The initial focus of the project – which has the support of AT&T, China Mobile, China Unicom, Deutsche Telekom and NTT from the traditional operator community – is the development of an open source Near Real-Time RAN Intelligent Controller (nRT-RIC) that is “compatible with the O-RAN [Alliance] architecture.”

That element, dubbed µONOS-RIC, is a microservices-based SDN controller based on a version of ONOS (Open Network Operating System), the ONF’s SDN controller that is already in use by major operators around the world in other network architectures (for example, in Comcast’s next-gen access network and SK Telecom’s 5G core).

In theory, the µONOS-RIC would be used to control multiple, multi-vendor RAN elements – namely the RAN RU/DU/CU (radio unit/distributed unit/centralized unit) elements – in a deployment conforming to O-RAN Alliance architectures, with the E2 interface used between the µONOS-RIC and those RAN elements. That’s in theory for now because, according to Timon Sloane, RAN elements that support the E2 interface are currently nowhere to be found, and that’s one of the causes of frustration among operators that are keen to get on with open RAN trials and deployments with true multi-vendor deployments (rather than being forced to take an integrated stack from a single supplier).

According to Sloane, there has been little R&D effort put into the development of open nRT-RIC elements and the xApps that run on that controller because such developments wouldn’t necessarily suit the best interests of the vendor community, which still mainly likes to keep SON (self-organizing network) and RRM (resource radio management) functionality locked away in the RAN elements. The nRT-RIC and xApps is “where the intelligence sits… we need to start getting the functionality out of the RAN elements and into the xApps… the operators want a powerful RIC and apps and a lot of interoperability,” says Sloane.

But why isn’t this already well developed by the open RAN community? The O-RAN Alliance may have a massive developer community (more than 150 vendor participants), but a focus on extracting the network smarts from the RAN elements may not suite many of those participants, notes Sloane: The 5G SD-RAN project is a way to help accelerate developments in this area, and developments from the project will feed back into the relevant groups within the O-RAN Alliance (enhancements to existing specifications) and TIP (the resulting RIC platform), he notes.

To help speed things along, there are (at least to start with) just a few companies involved in the early development work, but the identities of those involved is interesting in itself.

On the ‘operator’ side, in addition to the major operators named above, there’s Google. Sloane is a bit coy about Google’s role in the project: He says the Web services and pubic cloud giant has always been very supportive of the ONF’s work and that “multiple facets” of the Google empire will be engaged in the project. That will include Google Cloud, which, like AWS and Microsoft Azure, will want to provide the cloud platform on which functionality such as the open nRT-RIC and xApps will run.

On the vendor side, there’s Radisys, which has long been developing software stacks for mobile network systems developers, so that makes sense. These days, though, Radisys is owned by Reliance Jio, the giant Indian operator that is seeking to develop its own suite of 5G functionality inhouse and then offer it up as apps to other operators around the world (the same model that is being adopted by open RAN champion Rakuten Mobile). Jio, though, is not among the named operators involved in the project: Sloane said he couldn’t speak for Jio as to why that was (which is fair enough…).

The other named vendor is Sercomm, a Taiwanese white box hardware developer that “has a lot of experience in the small cells sector,” says Sloane.

In addition, Intel and Facebook are providing the underlying technology to be used for the project’s developments.

The aim, says Sloane, is to have the µONOS-RIC developed and up and running by the end of the year and have it in field trials in 2021.

That may sound ambitious, but the ONF doesn’t depend on the occasional contribution of time and effort from participating companies: It has its own team of developers that will work full time on this development. And it has the backing and support of some of the biggest names in the indystry -- the supporting quotes in the official press release from major mobile industry names such as Alex Choi, SVP of Strategy & Technology Innovation at Deutsche Telekom, and Dai Kashiwa, Evangelist, Director of NTT Communications, suggest this is a project that isn’t going to fizzle out and disappear… quite the contrary.