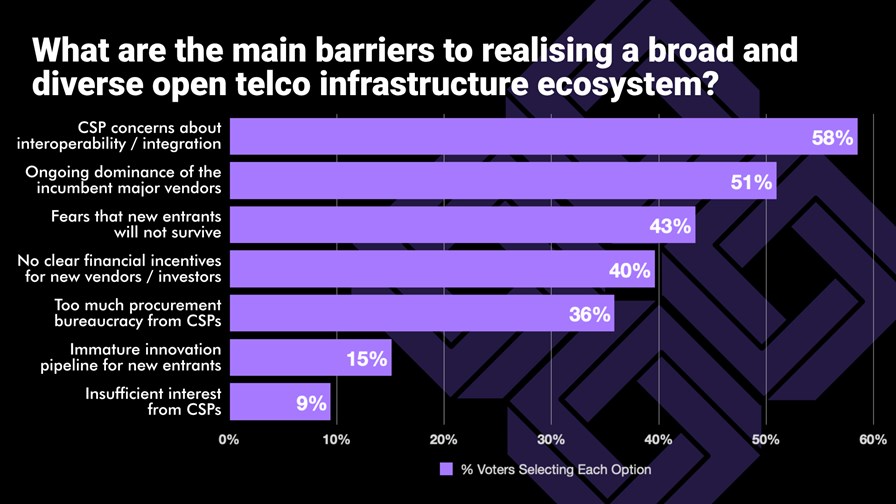 Concerns among network operators about interoperability and integration, as well as the ongoing dominance and influence of the industry’s incumbent major vendors, are the main barriers to a significant expansion of an open telco infrastructure ecosystem, according to the results of a poll conducted during TelecomTV’s recent Open Telco Infra Summit – a mix of interviews, live roundtable discussions and interactive Q&A panels.

It has long been argued by many, but not all, in the industry that an enhanced ecosystem of companies developing technology and applications for open, multivendor network architectures would be a catalyst for greater innovation and would provide network operators with a greater choice of supplier options. So we asked those who attended the online summit to vote in our poll: What are the main barriers to realising a broad and diverse open telco infrastructure ecosystem?

We offered up seven options and respondents could vote for as many as they thought were relevant.

The option ‘CSP concerns about interoperability/integration’ attracted the most votes, cited by 58% of those who voted.

This concern, that the difficulty in enabling multivendor interoperability and the challenges associated with integrating technology from multiple suppliers, was reflected in the roundtable discussions and audience questions throughout the two-day event.

Close behind, selected by 51% of those who voted, was the option ‘Ongoing dominance of the incumbent major vendors’. This is a popular view in the industry: No matter how enticing or advantageous open infrastructure options might be, it’s going to be hard for network operators to shift away from the tried and trusted suppliers they already have, while those large incumbent vendors will be doing all they can to stifle the existence and business potential of upstart rivals.

Even if new entrants do emerge, there’s always the concern that, for one reason or another, their existence might be fleeting, and network operators will be wary of engaging with smaller suppliers that might not have the finances or scale to be long-term and reliable partners. This topic was also the focus of audience questions during our live Q&A sessions as well as a roundtable discussion.

There’s also the question of whether it’s worth new companies entering the telecom sector, and quite a few of the summit’s audience think that’s a challenge: The poll option ‘No clear financial incentives for new vendors/investors’ attracted votes from 40% of those who participated in the poll, while the option ‘Too much procurement bureaucracy from CSPs’, a bugbear among many vendors, especially smaller ones trying to break into telco accounts, was cited by 36% of voters.

But some potential challenges are not widely regarded as barriers: The option ‘Immature innovation pipeline for new entrants’ attracted votes from just 15% of those who participated, suggesting that only those with something truly innovative to pitch will get a chance to put their case to network operators, while just 9% of voters believe that ‘Insufficient interest from CSPs’ is a barrier to realising a broad and diverse open telco infrastructure ecosystem.

So can some of these perceived major barriers be broken down? Currently, it would seem they are still holding quite firm, as the open telco infra sector, which encompasses every part of the network architecture (from the optical and routing core all the way down to the fixed access broadband, radio access network and customer premises equipment) isn’t currently heaving with new names and a rapidly expanding ecosystem… at least not yet.

Catch up with all the sessions from our Open Telco Infra Summit, including interviews with executives from Cellnex, Dell, Infinera, MTN, NTT Docomo, Omantel, and much more.